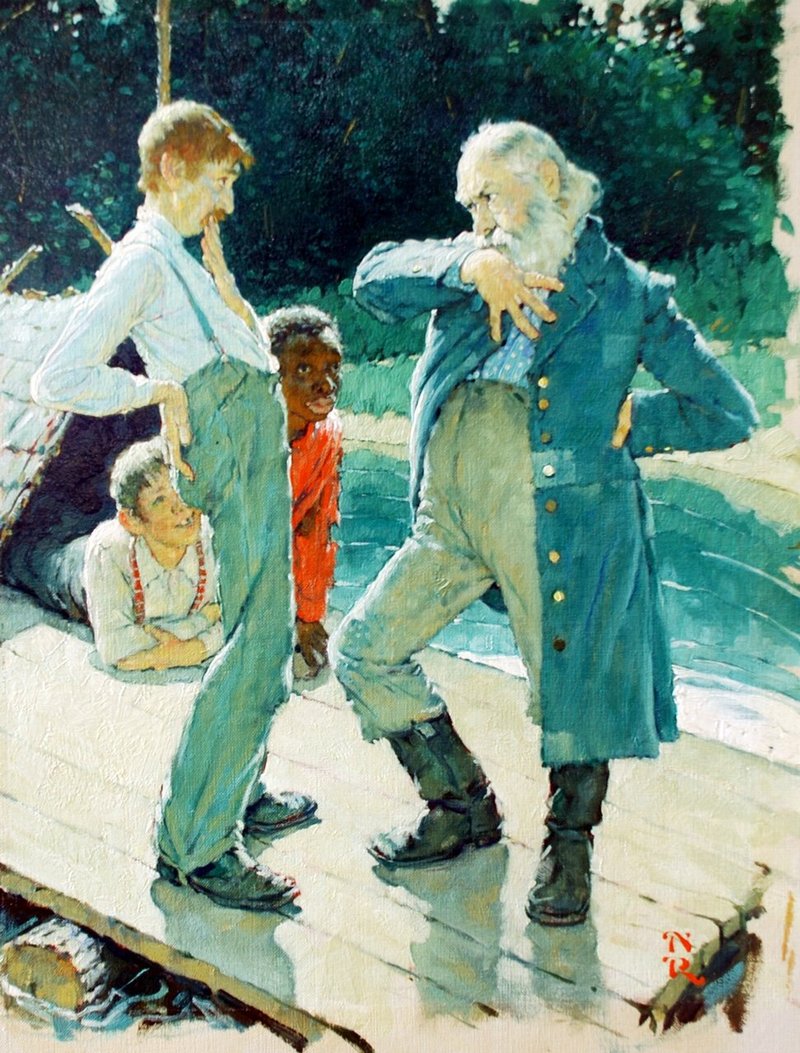 This Norman Rockwell lithograph, showing the Duke and the King with Huck and Jim and inspired by Mark Twain’s Adventures of Huckleberry Finn, is part of “The Mighty Mississippi: A Mosaic of America’s Growth” exhibit at the Clinton Presidential Center.

“The Mighty Mississippi: A Mosaic of America’s Growth”

It has been called "the spine of our nation," a geographical feature that splits the nation almost in half. It has been the site of triumph and tragedy, a source of dreams and inspiration.

Now, the Mississippi River is the focus of a new temporary exhibit at the Clinton Presidential Center: "The Mighty Mississippi: A Mosaic of America's Growth," open Saturday through March 3.

"The exhibit really explores the river's impact on the growth of America, its impact on the environment, economy, culture, commerce, transportation, literature," explains Ben Thielemier, communications manager for the Clinton Foundation.

It explores all that through an eclectic collection of objects that Thielemier describes as "a cross-section. Just a glimpse at the incredible impact this river has had on the growth of our country."

• A model of the ill-fated Sultana steamboat, which burned and sank April 27, 1865, near Marion, killing roughly half of 2,400 passengers aboard. "It's a story a lot of people are not familiar with," says exhibit curator Stephanie Sims.

• Copies of letters from 1927 flood survivors

The items come from a variety of sources including the Plantation Agriculture Museum in Scott, the Delta Cultural Center in Helena-West Helena, the Mark Twain Boyhood Home and Museum in Hannibal, Mo., and the Mississippi River Museum at Memphis' Mud Island.

"The diverse institutions we were able to work with are indicative of the diverse impact of the river on the growth of America," Thielemier says.

The exhibit is this year's Fusion: Arts + Humanities Arkansas exhibit. The program, which started three years ago, explores heritage, culture and human achievement through the lens of a single historical topic. Other topics have been the Quapaw tribe and the Louisiana Purchase. The Mississippi River, though, is big enough that Sims says, "We actually have to do it in two parts."

This exhibit focuses on America's growth. Next year will dig deeper into the culture of the southern Delta.

The exhibit is only one part of the Fusion program. There will be a two-day educators institute this weekend. A condensed version will be open to the public 5:30-7:30 p.m. Sunday. The evening features a lecture by photographer, filmmaker and folklorist Tom Rankin and a series of performances by the Arkansas Symphony Youth Orchestra Jazz Ensemble, the North Little Rock High School Theater Department and Grammy-winning and nominated David Evans.