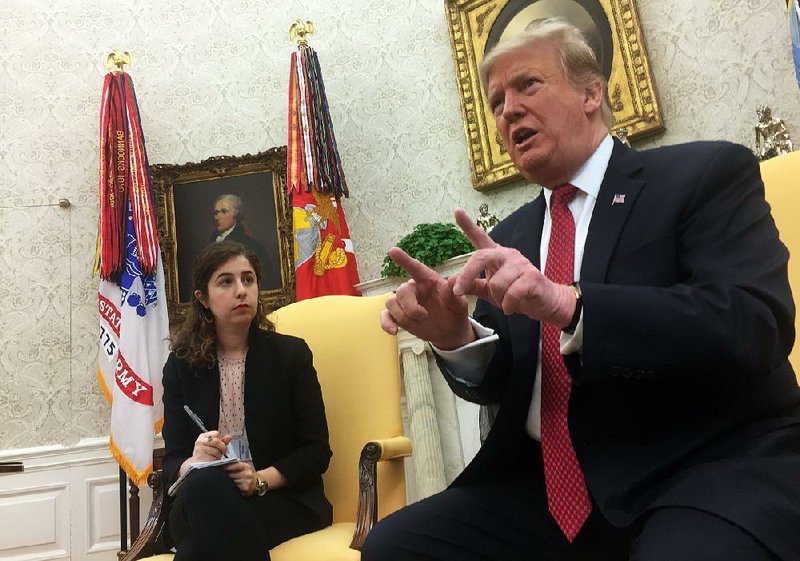 President Donald Trump meets Wednesday in the Oval Office with reporters, including Tamar Hallerman(left) of the Atlanta Journal-Constitution. Among topics he discussed was Arkansas’ U.S. Sen. Tom Cotton, who Trump said he’d been on the phone with just before the press session.

WASHINGTON -- Increased spending on disaster relief, defense and Democratic priorities has prevented Donald Trump's administration from balancing the nation's budget, the president said Wednesday afternoon. He held out the possibility that he would eventually balance the budget "at the right time."

In an Oval Office interview with a dozen reporters from news organizations, including the Arkansas Democrat-Gazette, the president said enhancing the nation's military capabilities is a higher priority than slowing the growth of the nation's nearly $22 trillion debt.

During a roughly 45-minute exchange, a relaxed Trump discussed a number of topics, including legal immigration, free trade, California forest fires, efforts to free Americans held in Syria, his friendship with U.S. Sen. Tom Cotton, R-Ark., and his desire to visit Arkansas.

That speech, which called for "cooperation, compromise and the common good," made no mention of budget deficits or the national debt, which continues to grow.

As a candidate, Trump had predicted that he'd balance the nation's budget and get rid of the national debt "fairly quickly."

Instead, deficit spending has accelerated, from $584.7 billion in fiscal 2016 to $665.8 billion in fiscal 2017. The Congressional Budget Office estimates this fiscal year's deficit at $897 billion, up from $779 billion the previous year. The deficits are expected to continue growing, topping $1 trillion by fiscal 2022.

Unexpected events complicated his path to a balanced budget, the president said.

(The White House referred questions about the funding figures to the Federal Emergency Management Agency, which could not be reached for comment Wednesday evening.)

Defense spending also drove up the deficit, he said.

"We had to rebuild our military. Look, that's more important than balancing the budget, which I can always do at the right time. And we had to rebuild many other things," he said.

"With the Democrats, when we had to rebuild the military, then we had to give them money for their projects in a similar amount," he said. "And in many cases it's like throwing money out the window. Otherwise you can't get it approved."

In a written statement requested by the Democrat-Gazette, House Budget Committee Chairman John Yarmuth, D-Ky., said Republican tax cuts are to blame for the soaring deficits.

"A balanced budget has always been one of the Republican party's greatest cons, and it's obvious the President is neither sincere nor does he understand the devastating consequences it would have for our economy and our families. He also fails to acknowledge that it was his own tax giveaway to millionaires and big corporations that added $1.9 trillion to our deficits, worsening our deficit outlook significantly," he said.

Members of the Regional Reporters Association were invited to meet Wednesday with Trump and ask him questions of their choosing.

Initially, the White House had classified Trump's comments as "off the record," but the president readily agreed to be quoted.

Among other things, he denounced the North American Free Trade Agreement and praised its replacement, the United States-Mexico-Canada Agreement.

The new agreement, once it gets congressional approval, will be far better, he said.

"It's going to be great," he predicted.

Trump also called for increasing the number of legal immigrants allowed into the U.S. He made a similar appeal during Tuesday's address.

Immigrants can help to keep the economy strong, he said.

"That was really a lot of bad luck," Trump said. "It was dry, you had 80-mile-an-hour winds, it was a very flammable area."

Asked about Americans being held in Syria by the regime of President Bashar Assad, Trump said he's aware of their plight and will work to bring them home.

One of them, Majd Kamalmaz, is a University of Arkansas at Little Rock alumnus. He was detained two years ago in Damascus. His family hasn't heard from him since.

On Tuesday, Kamalmaz's son, Khalid, was U.S. Rep. French Hill's guest at the State of the Union address.

During Wednesday's interview, Trump highlighted his past efforts to free Americans held overseas, suggesting that his successes in that area surpass his losses.

Late Wednesday, Hill said he was "incredibly grateful that President Trump has acknowledged our detained Americans in Syria, which includes Majd Kamalmaz. I asked for the president's help in bringing Majd safely home because of his strong record of securing the release of Americans held in dangerous places. This is welcome news, and I will continue working with the president and the State Department to do everything possible to ensure Majd is brought back home to his family in the United States."

Discovering that a reporter in Wednesday's group was from Arkansas, Trump heaped praise on the state -- "What a great place!" -- and its two U.S. senators.

"Tom Cotton is a great guy. He's a great senator and a friend of mine. I just spoke to him two minutes ago," Trump said.

In an interview afterward, Cotton said the conversation had focused on the previous night's State of the Union address. "He was in good spirits. I told him he should be in good spirits. It was a good speech, and it highlighted a lot of the accomplishments over the past two years," Cotton said.

Asked about his rapport with Cotton, Trump said: "We just hit it off from day one. I met his parents, I really liked them, you know, when I was campaigning."

That was during a trip to Hot Springs in 2015, when Trump spoke at a fundraising dinner for the Republican Party of Arkansas.

Asked if he'd be coming to Arkansas again, Trump said he plans to visit and campaign for Cotton, who is up for re-election in 2020.

Trump also wanted to know when the state's senior senator -- John Boozman -- would be up for re-election. (It will be in 2022.)

"You have two great senators," he said. "John Boozman's been fantastic, too."

Doyle Webb, chairman of the Republican Party of Arkansas, said Trump is welcome to visit.

"We would be more than happy to have the president in the state of Arkansas," he said. "We would be glad to receive him and show him a good time."

Cotton agreed. "Campaign season is a little far away, but any presidential visit is a special thing for the state of Arkansas," he said.