Roads, not tax cuts, higher on some Arkansas Republicans' lists 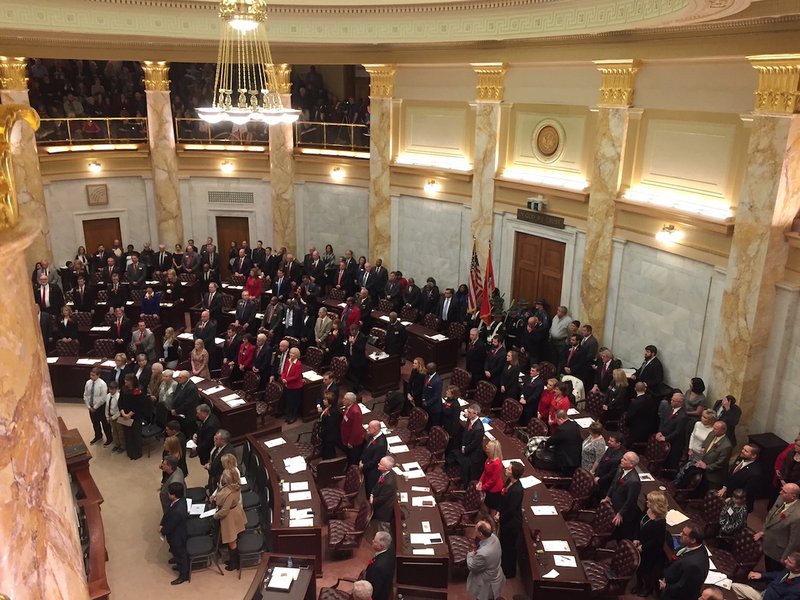 FILE - The Arkansas House of Representatives convenes Monday, Jan. 9, 2017, at the state Capitol in Little Rock during the 91st General Assembly.

A cadre of state House Republicans, such as Rep. Michelle Gray of Melbourne and Jana Della Rosa of Rogers, said Thursday that they're undecided about legislation that would implement Gov. Asa Hutchinson's plan to cut the state's top individual income tax rate, at least in part because of the lack of a highway funding plan.

But the Republican governor said Thursday afternoon that he expects to announce a highway funding plan Monday.

Hutchinson's tax-cut plan is projected by state officials to reduce revenue by about $97 million a year, after it's fully implemented. The plan would cut the top rate from 6.9 percent to 5.9 percent over two years.

A day after Senate Bill 211, the tax-cut proposal, cleared the Senate and headed to the House, Gray said, "I don't feel that my district wants us to vote on another tax cut when we haven't addressed highways.

"I need to see a highway plan. I need to see the governor come out and say this is what we are going to do to address highways and infrastructure," she said in an interview.

"As far as the tax [cut] plan itself, I am OK with it," Gray said. "I am just plain and simple holding out until I see a plan for highways. We have cut taxes for the low income [and] the middle income. I think my district is fine with us doing it for this [upper-] income bracket.

"It is just I am getting emails, text calls, 'Why are we cutting taxes when we need to fund highways? Why can't we use that money? What are we doing?'"

"The Republicans don't oppose the tax cut. It's just a negotiating thing where we have other important issues that we want to make sure get discussed as well before we just go passing a $97 million tax cut," she said, noting she is seeking state funding for voting equipment.

"In the last two sessions I have been here, and we are doing it again this time, everything the governor wants ... we roll through right at the beginning of the [regular] session and then the rest of us are kind of left with 'Well, now I have got nothing to bargain with.' We have no bargaining power anymore and I just think we are putting all our cards on the table right now."

Gray and Della Rosa aren't the only members to express concerns.

Rep. Charlene Fite, R-Van Buren, said in an email to the Arkansas Democrat-Gazette, "I'll be voting against the tax cut unless I'm sure that we can find additional money to fund our senior centers."

Earlier Thursday, she asked the Joint Budget Committee to approve her proposed amendment to increase the spending authority from $5 million to $8 million for senior citizens in Senate Bill 102 -- the appropriation for the Department of Human Services' Aging, Adult and Behavioral Services Division.

"We have had conversations with many of you, including our [committee chairmen] as well as folks with the governor's office," Fite told the committee. "At this time, the funding for this has not been secured and we continue to be hopeful. We are exploring a number of options for this. If we are successful in securing the funds or a portion of it, this increase [in spending authority] is necessary to have the authority to spend the money."

State Budget Administrator Duncan Baird told lawmakers, "This is the first time I have seen this so I wasn't really prepared to come down here" and take a stand on the proposal.

Eventually, the committee co-chairman, Sen. Larry Teague, D-Nashville, asked Fite to come back next week to allow Baird to provide more information about it.

House Republican leader Marcus Richmond of Harvey said it is going to be a "hard road" to win the required 75 votes to approve Hutchinson's income tax legislation in the House "unless we see something that can pass as a highway bill."

On Thursday morning, Richmond said there were about 17 to 18 House Republicans who were undecided about the income tax measure.

Thursday night, he said the vote count "is very dynamic and changing," referring to the governor calling lawmakers seeking their support.

"I understand that highway funding is a top priority for many legislators, and it is a top priority for me as well," the governor said in a written statement. "The maintenance and repair of our highways and roads is an urgent matter. I know that many members want to see details of a highway plan and we are continuing to finalize the legislation. We expect to have that announcement on Monday."

Department of Transportation officials have estimated long-term highway funding needs at more than $400 million a year.

Hutchinson has said he prefers that lawmakers refer to voters a plan to raise more money for highways. He also favors permanently extending the half-percent sales tax for highways, approved by voters in 2012 for 10 years.

House Speaker Matthew Shepherd, R-El Dorado, told reporters, "I would like to think that in the next few days that we could be pretty close to having a good idea of where we are going to go on highways.

"It's an ongoing discussion," he said. "I have mentioned that we need to transfer some [general] revenue toward highways. I think that's an important component of it. But there is a lot of different ideas. There is a lot of different proposals out there. But I think we are having a good discussion. I feel like we are getting close to being able to roll something out."

In a special session in 2016, the Legislature enacted Hutchinson's plan to use surplus general revenue and state treasury earnings to raise about $50 million a year. The state funds were to match $200 million a year in federal highway funds.

House Democratic leader Charles Blake of Little Rock said, "We are hoping we can avoid a huge number of revenue transfers" to highways. If there are those transfers, House Democrats want to protect funding for public schools and higher education institutions, he said.

Asked what the governor's vote count shows about the prospects for the income tax cut bill in the House, Davis said, "We are confident."

Shepherd said, "We are trying to figure out where the votes are at. As we know with the supermajority [of votes needed], it is a pretty heavy lift," he said.

"There are some members who have some concerns. Some members want to focus more on highways. We are still in the process of trying to make sure we are all on the same page. I'm still fairly optimistic that we'll be able to pass a tax cut," the speaker said.

Blake, the House Democratic leader, said at least 21 of the 24 House Democrats are planning to vote against the tax legislation because most of the total cut will go to people making at least $456,000 a year in taxable income. He said he would like for the state to create an earned income tax credit for low-income people.

If enacted, the governor's tax-cut bill would be the third reduction in individual tax rates since Hutchinson became governor in January 2015. The others reduced lower- and middle-income taxes.

The current top rate of 6.9 percent applies to people with at least $79,300 a year in 2018 taxable income. The Department of Finance and Administration expects that figure to "move to approximately $80,500" when adjusted for inflation this fall, agency spokesman Scott Hardin said.

About 579,000 taxpayers would receive a tax cut under SB211, the state Department of Finance and Administration estimated.