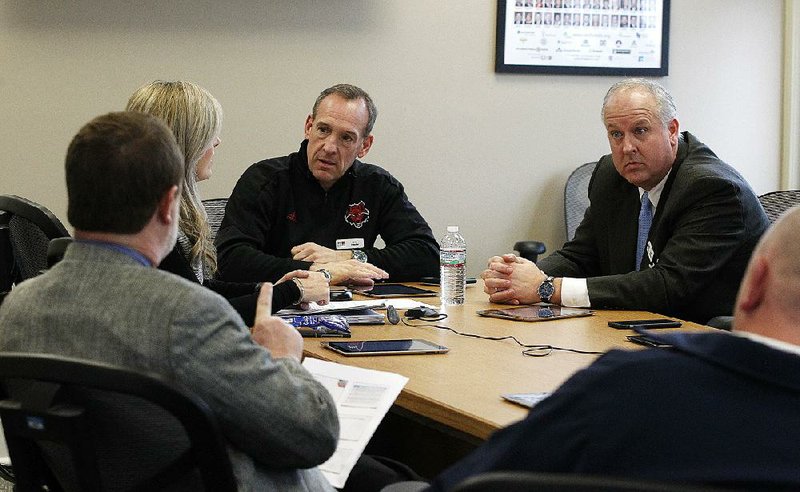 Arkansas Health Insurance Marketplace Finance Director Tony Beeler (from left) and Director Angela Lowther discuss a plan to reduce the number of workers who help people sign up for health coverage at Wednesday’s board meeting in Little Rock with marketplace board members Greg Hatcher and Mark Meadors.

Dissolving the agency responsible for Arkansas’ health insurance exchange likely will require a vote of its board, the agency’s interim director said Friday.

According to marketplace records, attorneys with both firms, Wright Lindsey Jennings and Gill Ragon Owen, noted that the marketplace was incorporated by its board in 2013 under the Arkansas Nonprofit Corporation Act of 1993.

The law allows a nonprofit corporation to be dissolved by its board or a court order, the attorneys said.

Christopher Travis of Gill Ragon Owen also noted in a letter dated Friday that the secretary of state can dissolve a corporation if it fails to pay taxes or meet certain other requirements.

Travis wrote that SB113, if enacted, could violate the state constitution, which prohibits private property from being taken for public use without “just compensation.”

“This would be a novel use of the takings clause and would, of course, require much further thought and research,” Travis wrote, adding that the information in the letter is “preliminary and subject to refinement.”

According to a marketplace handout distributed at Friday’s board meeting, Wright Lindsey Jennings noted that the board would need to take action on the dissolution by March 15, when the board would be abolished under SB113.

At that point, the Insurance Department would have to “commence a Court proceeding” to dissolve the marketplace, according to the handout.

Bell said he wanted to bring the legal opinions and other matters related to the potential transition to the board’s attention on Friday, although he said it was premature for the board to take action since SB113 has yet to be signed into law.

The bill passed the Senate on Monday in a 32-0 vote, with one senator voting “present,” and is expected to go before the House next week.

Bell said after the meeting that he doesn’t expect the board to resist the will of the Legislature.

“My sense from talking with the board is that they’re volunteers who did this because they feel like it’s a good thing for the state to do it, for them to do it, and I just get the sense that they’re tired,” he said.

SB113’s lead sponsor, Sen. Jason Rapert, said the language in the bill is sufficient to carry out the recommendation of a legislative panel formed to explore options for the marketplace’s future.

“AHIM’s going away, partner, whether they vote to dissolve themselves or not,” Rapert, R-Conway, said. “If they want to have a hollow, empty shell of a nonprofit over there, that’s up to them.”

Created by the Legislature in 2013, the marketplace certifies the health plans sold in the state through healthcare.gov, promotes enrollment in the plans and helps consumers sign up.

Insurance Commissioner Allen Kerr has said his department could handle those duties at a lower cost and would be able to eliminate the portion of a fee charged to insurance companies that supports the marketplace’s operations.

Bell, a former state legislator who was hired under a contract calling for him to work up to three months, initially focused on promoting an alternative plan that would preserve the marketplace’s independence, but he admitted defeat Wednesday after SB113 cleared the House Committee on Insurance and Commerce.

He said Wednesday that he didn’t “see a significant benefit” to him staying on as interim director through the transition to the Insurance Department.

But in a closed session during the meeting Friday, “the board indicated to me that they felt like I can provide a benefit during that time,” Bell said.

“Given the legal advice we’ve picked up over the last couple days, this is gong to be a fairly complex matter with some negotiations that need to take place, so as long as I can be useful, I’ll hang around,” he said.

The board went into the closed session for about 30 minutes for what Chairman Mike Castleberry said was a discussion of the termination of the agency’s staff, but didn’t take any action afterward.

The staff consists of Bell; the previous director, Angela Lowther, who gave notice on Jan. 24 that she would step down Feb. 21; and eight other employees.

Act 1500 of 2013, which created the marketplace “as a political subdivision” of the state, requires it to follow the state Freedom of Information Act, which requires most meetings to be open to the public.

The law allows closed sessions “for the purpose of considering employment, appointment, promotion, demotion, disciplining, or resignation of any public officer or employee.”

Three of the board’s nine voting members are appointed by the governor, who can replace them at any time. The leaders of the House and Senate also appoint three members each who serve six-year terms. Kerr and Department of Human Services Director Cindy Gillepsie are nonvoting members.

Kerr said that transferring responsibility for the exchange to his department will require Gov. Asa Hutchinson, who has said he supports SB113, to send a letter to federal officials notifying them of the change.

Bell said he will work with Kerr on the transfer of some of the marketplace’s contracts to the Insurance Department. Castleberry, an executive with Healthscope Benefits in Little Rock, said he hopes all the marketplace’s business with vendors will be resolved “equitably and quickly.”

“We sure don’t want to leave anybody unpaid,” he said. 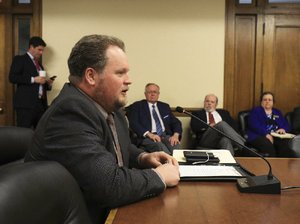 Photo by Staton Breidenthal
Nate Bell, interim director of the Arkansas Health Insurance Marketplace, is shown in this photo. 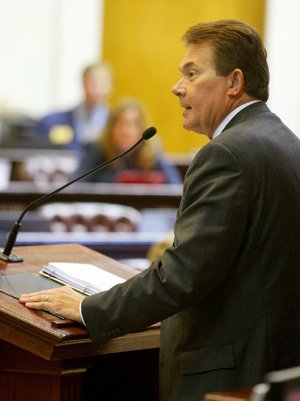 Rep. Allen Kerr, R-Little Rock, speaks on the house floor for his bill to create an Arkansas Veteran's Home task force which passed Friday afternoon at the State Capitol.
ADVERTISEMENT