Keep hands off Mueller’s work, he’s told by Democrat by Compiled by Democrat-Gazette staff from wire reports | February 9, 2019 at 4:30 a.m. 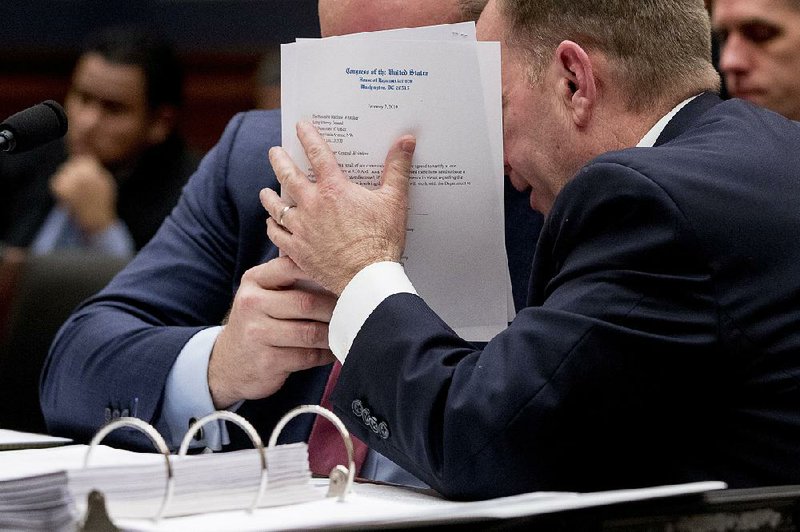 Matthew Whitaker (left) hides his face as he speaks with an aide Friday during his appearance before the House Judiciary Committee in a hearing that quickly became contentious.

WASHINGTON -- Matthew Whitaker, in his first and likely last appearance before Congress as acting attorney general, sparred for hours Friday with Democrats who sternly warned him not to impede special counsel Robert Mueller's investigation of Russian interference in the 2016 presidential campaign.

Whitaker, who took command of the Justice Department in November and is likely to leave the job next week with the expected confirmation of William Barr to serve as attorney general, told members of the House Judiciary Committee that he had not influenced Mueller's inquiry in any way and had not spoken to President Donald Trump about the investigation since his appointment.

In a series of exchanges with Democrats who questioned his credentials, judgment and integrity, Whitaker refused to disagree with the president's characterization of Mueller's investigation as a "witch hunt."

"It would be inappropriate for me to talk about an ongoing investigation," Whitaker said several times when asked whether he thought Mueller's work matched that description.

Generally, senior law enforcement officials have denied that the investigation is a witch hunt, and Democrats responded aggressively after Whitaker's refusal to do the same.

Rep. Hakeem Jeffries, D-N.Y., called the special counsel's work an important national-security investigation, saying, "The fact that people suggest otherwise comes dangerously close to providing aid and comfort to the enemy." Jeffries then urged Whitaker not to try to steer the case in his remaining days on the job.

"Keep your hands off the Mueller investigation," Jeffries said.

From the hearing's opening minutes, Whitaker was pressed by Democrats to explain his role in overseeing Mueller's investigation of Russian interference in the 2016 campaign.

"We're all trying to figure out: Who are you, where did you come from and how the heck did you become the head of the Department of Justice," Jeffries said. When Whitaker tried to respond, Jeffries interrupted: "Mr. Whitaker, that was a statement, not a question. I assume you know the difference."

The hearing quickly became contentious, as the committee's chairman, Rep. Jerrold Nadler, D-N.Y., used his opening statement to blast Whitaker for refusing to recuse himself from overseeing the Russia investigation despite the recommendation of Justice Department ethics officials that he step aside because of his past public comments criticizing the inquiry.

The panel's ranking Republican, Rep. Doug Collins of Georgia, in turn accused Nadler of engaging in "character assassination" and "political theater" and of wasting time by obtaining authority to subpoena Whitaker. Collins then forced an unsuccessful roll-call vote on whether to immediately adjourn the hearing.

Democrats received no new information about the status of the Mueller investigation as Whitaker repeatedly refused to discuss conversations with the president or answer questions that he thought might reveal details.

"There has been no change in the overall management of the special counsel investigation," Whitaker said in his prepared remarks. "I have and will continue to manage this investigation in a manner that is consistent with the governing regulations." 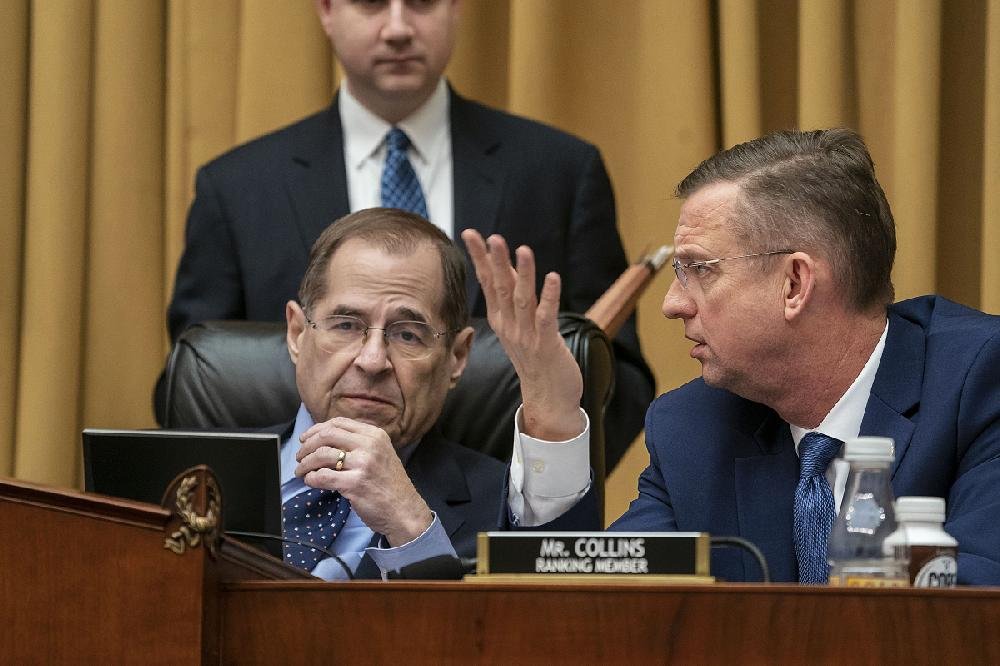 Nadler repeatedly pressed Whitaker to explain what he has been told about the special counsel investigation, as well as what he has told others.

"I have not talked to the president of the United States about the special counsel's investigation," Whitaker said, adding that he also hasn't talked to White House officials about the inquiry. Whitaker would not say when or how often he has been briefed on that investigation.

As Nadler kept insisting that Whitaker say whether he had approved investigative steps taken by Mueller, the acting attorney general tried to dodge the question.

"Mr. Chairman, I see that your five minutes is up," Whitaker said, prompting laughter in the hearing room. In congressional hearings, committee chairmen control the time for questions, not other lawmakers or the witnesses.

Under intense questioning about his interactions with Trump, Whitaker was asked about a media report that the president once berated him after Trump's former lawyer Michael Cohen pleaded guilty and implicated the president.

Rep. David Cicilline, D-R.I., asked whether the report was true. Whitaker at first seemed to demur, noting that Trump had said on Twitter that he did not lash out.

But Cicilline, saying he did not have confidence in the veracity of what Trump tweets, pressed Whitaker to answer under oath about whether the president had lashed out or otherwise expressed dissatisfaction over the Cohen case's developments.

But under questioning from Rep. Val Demings, D-Fla., Whitaker declined to say whether he had ever talked with Trump about the Cohen case or the federal prosecutors in Manhattan, N.Y., who handled it.

"I am not going to discuss my private conversations with the president of the United States, no matter what the question is," Whitaker said.

At one point, Rep. Sheila Jackson Lee, D-Texas, snapped at Whitaker when he made a casual remark about the time in the hearing.

"Mr. Attorney General, we're not joking here, and your humor is not acceptable," said Jackson Lee.

"That position that I mentioned last week in a press conference was my position as acting attorney general," Whitaker said.

He also revealed new details about his discussions to serve as a White House attorney, potentially putting him opposite the Justice Department in handling the response to the Russia investigation. He said he talked about the position with then-White House Counsel Donald McGahn's chief of staff, but that they mainly discussed Whitaker's background and experience and steered clear of topics specific to Mueller's inquiry.

Whitaker also addressed a question that has long been a curiosity of Democrats: who funded the nonprofit that paid him more than $1.2 million before he started working for the Justice Department. Rep. Eric Swalwell, D-Calif., asked whether the Foundation for Accountability and Civic Trust, which described itself as a watchdog nonprofit dedicated to exposing unethical conduct by public officials, had a foreign donor supporting it.

"I don't actually know the answer to that," Whitaker said. He added that he did not believe so, adding that "Our main donor was a group that was a U.S. entity." That entity, he said later, was a group called Donors Trust.

On Thursday, Whitaker had said he would not appear before the committee as scheduled unless committee Democrats gave him assurances he wouldn't be subpoenaed.

Earlier Thursday evening, Nadler sent a letter to Whitaker that provided no such promise, saying only that "there will be no need for a subpoena" if Whitaker answered lawmakers' questions. "To the extent that you believe you are unable to fully respond to any specific question, we are prepared to handle your concerns on a case-by-case basis, both during and after tomorrow's hearing," Nadler wrote.

Information for this article was contributed by Devlin Barrett, Matt Zapotosky and Karoun Demirjian of The Washington Post; by Eric Tucker, Mary Clare Jalonick, Chad Day and Jonathan Lemire of The Associated Press; and by Charlie Savage, Nicholas Fandos and Katie Benner of The New York Times.