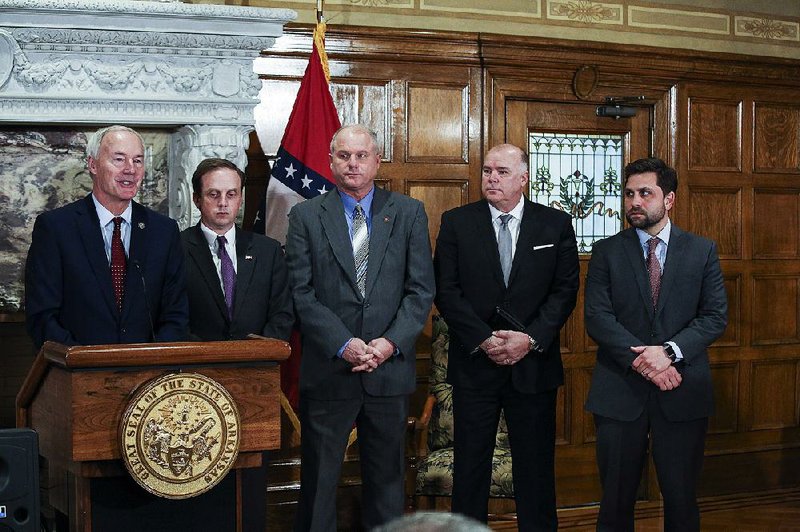 FILE - Gov. Asa Hutchinson (left) is joined by House Speaker Matthew Shepherd on Jan. 30 as he announces his “5.9 plan” for cutting income-tax rates.

But the day before, at 11 a.m. Monday, Hutchinson will hold a news conference to discuss details of a long-awaited, long-term highway plan. The announcement will be made in the governor's conference room at the state Capitol, his office said Friday.

This week is also the deadline for filing proposed constitutional amendments. And the sponsor of the governor's reorganization plan says he'll file a complete bill in about a week.

Jett said he hopes the emergence of the highway funding proposal will help persuade some reluctant lawmakers to vote for the tax plan on the House floor this week. Some representatives have been hesitant to embrace the tax cut in the absence of a plan to raise more money for highway construction and maintenance.

State officials project that Hutchinson's tax cut plan will reduce state revenue by about $97 million a year, after it's fully implemented. Some have questioned why the Legislature would cut taxes and then turn around and raise other taxes.

Jett said he expects the income tax legislation -- Senate Bill 211 by Sen. Jonathan Dismang, R-Searcy -- to move through his committee in "good shape."

Jett is the House sponsor for the bill.

"If we can get the highway plan nailed down this weekend, this will go a long way to free up the few remaining votes we need to have," he said.

SB211 needs 75 votes in the 100-member House (three-fourths) to pass. It would increase rates on about 213,000 taxpayers in the upper-income tax table. However, state officials said those taxpayers won't pay overall higher taxes under what Hutchinson calls his "5.9 plan."

The House consists of 76 Republicans and 24 Democrats.

But as far as a highway-funding plan, House Speaker Matthew Shepherd, R-El Dorado, said Friday afternoon that "there is no deal yet.

"I'm still optimistic. We're continuing to work," he said. "We'll try to continue to work through the weekend to find consensus. There is not a plan that I'm on board yet."

Shepherd said it's important that the final proposal involve transferring some existing state revenue to highways before lawmakers consider the possibility of raising taxes.

Under Hutchinson's highway plan enacted by the Legislature in 2016, the state largely taps surplus general revenue and state treasury interest earnings to raise about $50 million a year to match federal funds of $200 million a year.

Hutchinson has said he prefers referring a highway funding plan to voters.

He also wants to include in that plan a permanent extension of the half-cent sales tax for highways that voters passed in 2012 and that expires in 2023.

The governor hasn't spelled out how large of a highway funding plan he favors. State Department of Transportation officials have estimated their long-term funding needs at about $478 million a year.

"I don't think the details are really firm yet," he said late Friday.

"I think we have to lead with the tax cuts before we take up the highway funding issue, and there is just some that kind of got it backwards," he said. "I don't want to have to go back this weekend to my constituents and say, 'I just approved a tax increase for highways, but there is a tax cut coming.'

"You want to lead strategically with the tax cuts first," Lowery said. "I think everyone understands we have got to do something with highway funding."

House Republican leader Marcus Richmond of Harvey said Thursday, "We are going to provide a tax cut and then we are going to turn around and possibly increase taxes ... and it is not good optics as far as people are concerned and you get some blowback on that.

"I get emails saying, 'Don't cut taxes, fix our highways.' ... These are some real people in my district," he said in an interview.

"At this point, I still support the governor's tax cut because I think we need to do that and then move on. That way we will know what the revenue situation is, and we can move on and decide how best to adjust the other. At the same time, I don't think we should leave until we got our [highway plan]. We have kicked that down the road too many times, and the cost is never going to go down. It is going to keep growing," Richmond said.

Richmond said he's not expecting "a lot of support from our Democratic colleagues" on Hutchinson's income tax cut legislation "so, you got to have a pretty solid group of supporters to get past that 75-vote threshold, so just a couple of people will shoot it down."

"I haven't reviewed it, but I am looking at it," he said. "I need more information."

Perry said he wants to learn more about the latest tax plan, compared with the previous version.

SB211 fell two votes short of the 27 required for approval in the 35-member Senate on Tuesday. But then it cleared the chamber in a 28-5 vote Wednesday, with affirmative votes from two Democrats and a Republican who didn't vote on the bill Tuesday.

Hutchinson unveiled his latest proposal Jan. 31. It is his third version since February 2018 of a plan to cut the top individual income tax rate.

The previous proposal was projected to reduce revenue by nearly $192 million after being fully implemented. But it ran into a snag several weeks ago after officials concluded that roughly 200,000 taxpayers would pay more than $30 million more in income taxes.

If enacted, an income tax cut approved this year would be the third since Hutchinson took office in 2015.

The current top rate of 6.9 percent applies to people with at least $79,300 a year in 2018 taxable income. The Department of Finance and Administration expects that figure to "move to approximately $80,500" when adjusted for inflation this fall, agency spokesman Scott Hardin said.

About 579,000 taxpayers would receive a tax cut under SB211, the state Department of Finance and Administration estimated.

In 2015, the Legislature passed Hutchinson's plan to cut rates for people earning between $21,000 and $75,000 a year in taxable income. State officials projected that tax cut would reduce revenue by about $100 million a year.

In 2017, the Legislature approved Hutchinson's plan to cut the rates for people earning up to $21,000 a year in taxable income. State officials forecast that cut would trim tax revenue by $50 million a year. The tax cut took effect on Jan. 1 of this year.

The deadline for state lawmakers to file constitutional amendments is Wednesday.

So far, only four proposed constitutional amendments have been introduced.

"It is rules or caps," he said referring to the proposals. "Right now, there is probably a little bit more support for caps [on certain lawsuit damages] because it is simpler and easier to understand. It's something that is done in many other states. I don't think that's final yet, but I would be surprised if one of those does not make the ballot."

The Senate and House State Agencies and Governmental Affairs Committees decide which proposals their chambers consider.

"We'll just have to open the Pandora's box on Wednesday and see what's there," said Senate committee chairman Ron Caldwell, R-Wynne, who said he's only heard about a few proposals.

The other proposals pertain to elections, sovereign immunity and legislative sessions.

Rep. Andy Davis, R-Little Rock, said that a week from Monday is the earliest he expects to file the 1,500-plus-page bill that would implement Hutchinson's plan to reduce the number of state agencies that report to him from 42 to 15.

Davis already has filed 16 separate bills that will be included in the consolidated bill for review by the public and lawmakers.

The House and Senate State Agencies and Governmental Affairs Committees have been reviewing the bills since the session started Jan. 14.

Amy Fecher, the state chief transformation officer, said, "We will be seeing huge efficiencies in facilities" under the governor's transformation plans and the legislation would give the state the option to put the state police headquarters elsewhere in central Arkansas, such as in North Little Rock.

That later led Sen. Will Bond, D-Little Rock, to ask if there is a particular plan to move the state police headquarters.

Fecher replied, "No, there is not."

The calendar of public events of the 92nd General Assembly for Monday, the 29th day of the 2019 regular session. 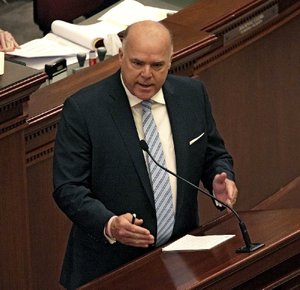 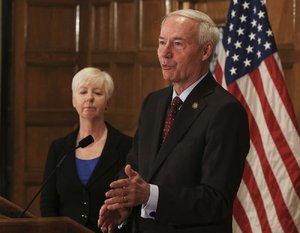 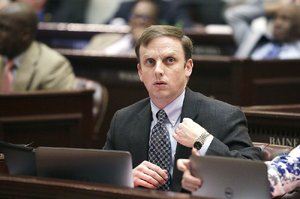 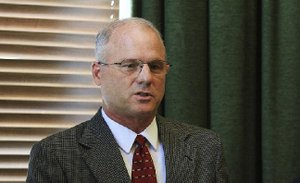 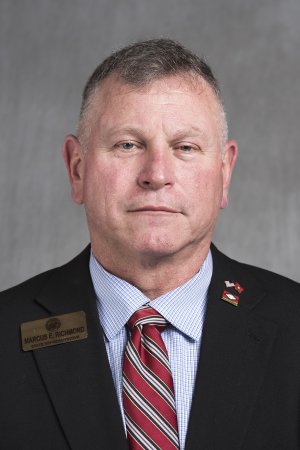 Photo by Special to the Democrat-Gazette
House Republican leader Marcus Richmond of Harvey is shown in this file photo.