WATCH YOUR LANGUAGE! Even the words we use about laughing are fun 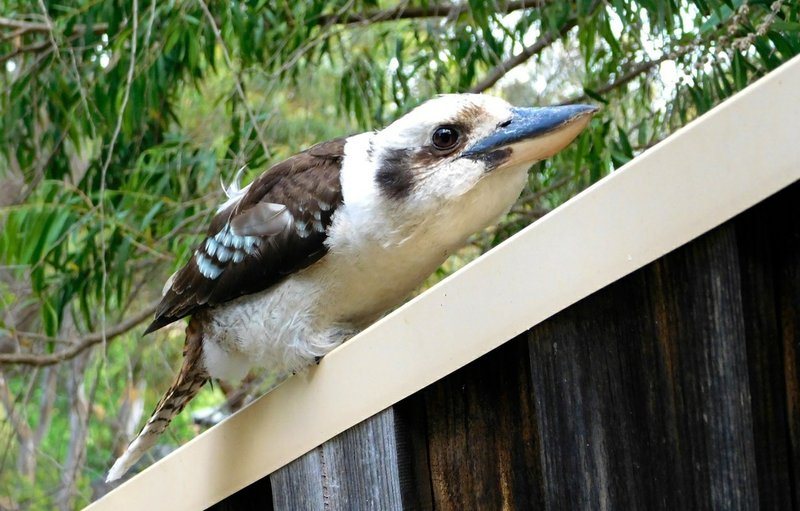 This is a Kookaburra. (Pexels)

Laughter is an important part of life, and I get as much practice as I can.

The American Heritage Dictionary says the word "laugh" is imitative, or meant to sound like what it describes. (Think of "buzz" and "clang.") Its roots include an Old English word, hliehhan. I won't pretend to know how to pronounce any Old English word, but apparently that first sound would be breathy, so it must sound something like "ha-ha."

"Laughter" is spelled a lot like "daughter," but, because this is English, the two are pronounced differently.

"Laugh" is a broad word but still has many synonyms.

You "giggle" or "titter" if you're a bit shy or nervous.

A "chuckle" is a quick, quiet laugh. I was surprised to read that, because I thought a chuckle was more of a goofy laugh.

A "guffaw" is a loud, punctuated burst of laughter. This bothers me because I laugh like this all the time, but I'm not fond of the word "guffaw."

When you laugh extra hard, you "crack up," "break up" or "roar." A particularly good joke might split your sides, but, if you're lucky, not literally.

A disturbing number of synonyms for "laugh" add a quality of derision. You're not being kind when you "cackle," "hee-haw," "snicker" or "chortle" at someone.

Cackling is what chickens do, and hee-haw is the sound of a donkey. Snickering shows disrespect. I'm not sure what a chortle sounds like, though people seem to chortle in books a lot. English writer Lewis Carroll created the word "chortle" in 1871 in Through the Looking-Glass, combining "chuckle" and "snort."

Those are common ways to name laughter. I found a few more words related to laughter that cracked me up.

The adjective "abderian" describes excessive laughter. The word alludes to Democritus, "the laughing philosopher," who was a native of Abdera. He was among the first to develop the atomic theory of the universe. I liked this guy until I found out his nickname came from his hobby of publicly mocking people.

"Risibility" is one's ability or inclination to laugh. This trait should be included on resumes.

"Gelotoscopy" is like palm reading for your laugh. Apparently gelotoscopy explains what your laugh says about your character or your future. Snickerers beware.

Laughter is in many of our sayings.

He laughed all the way to the bank.

This would be a little disconcerting to witness. The phrase comes from a person making money in a way that others doubted would succeed. This made me think of the inventor of Chia Pets.

She'll be laughing out of the other side of her mouth.

This means that she'll humbly learn her view was wrong. I can't be sure which is the humble side of the mouth.

This report card is no laughing matter.

Laughter is the best medicine.

This means if you're ailing in any way, laughter will help you feel better. I believe that.

When you laugh up your sleeve, you're discreet. But, unless your shirt is soundproof, you're going to get caught.

He who laughs last laughs longest (or best.)

I figured the guy who takes the longest to understand the joke laughs last. Instead, the expression is similar to "slow and steady wins the race." You may take a while to get to the laughter, but when you get there, it will last.

Laugh and the world laughs with you.

In journalism school, they teach us not to confuse laughing with talking.

Wrong: "We feel guilty that we carved our initials in the table," he laughed.

I don't know the science involved, but it's not easy to laugh out words.

Better: "We feel guilty that we carved our initials in the table," he said, laughing.

They also tell us not to write a photo caption that says people are "sharing a laugh." When I see this, I imagine one man laughing then telling the woman nearby that her turn to laugh is next. Laughter is free; we don't need to share it.

One last thing. The kookaburra, a big Australian bird, supposedly makes a sound like donkey laughter. Click here to watch a YouTube video of actual, not at all donkey-ish kookaburras hooting.