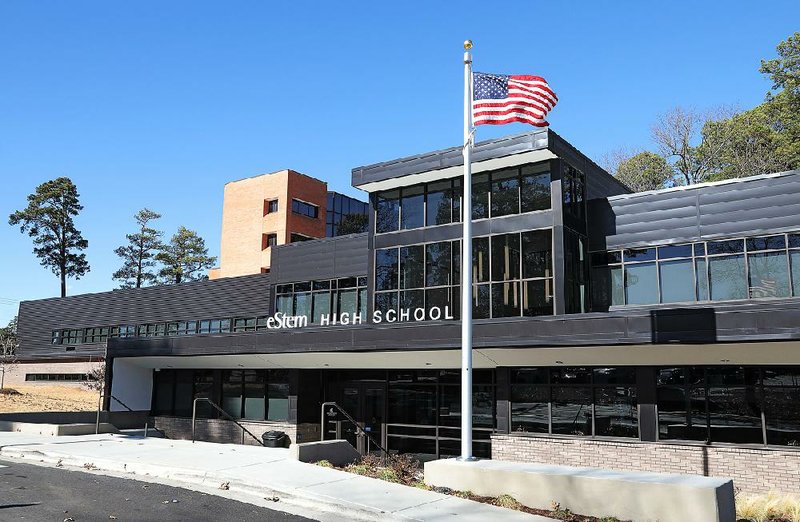 The remodeled and expanded Larson Hall on the campus of the University of Arkansas at Little Rock is now an eStem Public Charter High School.

University of Arkansas at Little Rock leaders plan to approach eStem Public Charter High School leaders this week with another idea for alleviating lunchtime crowds at the university's student center.

For a year and a half, eStem Public Charter Schools has operated a high school on the south end of the university's campus. School leaders have called it an "experiment" that they anticipated would benefit the high school's science, technology, engineering and math-oriented students.

But university leaders have questioned whether their students are benefiting from the arrangement.

Since the high school's first semester, there's been tension over the presence of eStem students on the university's campus, and late last month university student leaders began circulating a petition urging UALR administrators to address the situation.

The problems, university students say, include a "high school atmosphere" on campus. The petition had 1,200 signatures as of Wednesday.

The high school students are confined to the high school and various spots in UALR's Donaghey Student Center, where they eat lunch.

UALR Chancellor Andrew Rogerson told the Arkansas Democrat-Gazette on Friday afternoon that he has an alternate site on campus that he believes could accommodate eStem's three lunchtime rotations of roughly 175 students.

He declined to name the site, saying he had yet to mention the suggestion to students or reach an agreement with eStem officials on using it. It is near the eStem school, Rogerson said, adding that it would not need to be renovated, is not an entire building and is not empty.

Records requests for communications with eStem officials regarding the high school's campus did not yield any documents about other buildings. Officials recently scrapped hopes of renovating University Plaza, the university-owned shopping center on the south part of the campus, as a place for eStem students to eat lunches, after the officials learned what it would cost to modify the site to meet fire codes.

After saying just more than a week ago that he believed the arrangement between the university and eStem was "failing in its current form," Rogerson said Friday that he was optimistic about reaching a short-term agreement to accommodate eStem students for lunchtime and after school for the next two school years.

"The campus knows we are trying to find a place to put them, which is going to keep them [eStem students] out of the student center," Rogerson said. "And that's for the benefit of both institutions. It's not that we're trying to get rid of eStem. It's just too many people trying to eat in a facility that cannot handle my students and their students."

John Bacon, chief executive officer of eStem Public Charter Schools, could not be reached by email or phone Friday.

Finding space on campus for the high school students coincides with enrollment drops at the university, which is attempting to boost its enrollment to 15,000 students by 2022.

UALR's enrollment was 10,525 students last fall, down 15 percent from five years earlier. As of Oct. 1, eStem had 506 students enrolled.

Records show that Rogerson believed in December 2017 that the schools' leaders were "close to ironing out the issues" of having the high school students on the university campus and potentially in more university buildings. He suggested creating a task force to study how to make the arrangement between the schools mutually beneficial, and a loose form of that task force has met periodically since then to discuss that, Rogerson said.

The eStem students eat in open areas of the Donaghey Student Center, including near outside food vendors and sets of tables in other wings of the student center.

When approached, some eStem students said they have little interaction with university students. They said they don't feel that they're a bother and that the university students aren't a bother, either. Some younger high schoolers can be loud and have less self-control, they said, and they understood how that could annoy some people.

University students said the presence of eStem students disrupts the collegiate atmosphere on campus. But the situation is better this year than previously, they said, now that the high school students aren't using the university students' dining hall.

University students need a designated spot to "chill" now that the student center is full for a few hours each day, they said.

Under the lease agreement, the annual rent of $1 is due to the university on or before Sept. 1.

The term of the lease agreement is unclear. At the time of the agreement in 2016, the parties agreed to a 30-year term with four consecutive five-year renewal options. The document states that it "shall be for an initial period of thirty (30) years ... and ending on August 31, 2036." A 30-year agreement would end in 2046.

As the lessor in the agreement, the university is responsible for water, sewer taxes, electricity, gas and all other utilities consumed on the property, as well as telephone, cable and Internet access.

The termination provision of the lease agreement -- subject to the rights of the Walton foundation -- stipulates that eStem or a successor tenant may terminate the lease at any time with 30 days' written notice.