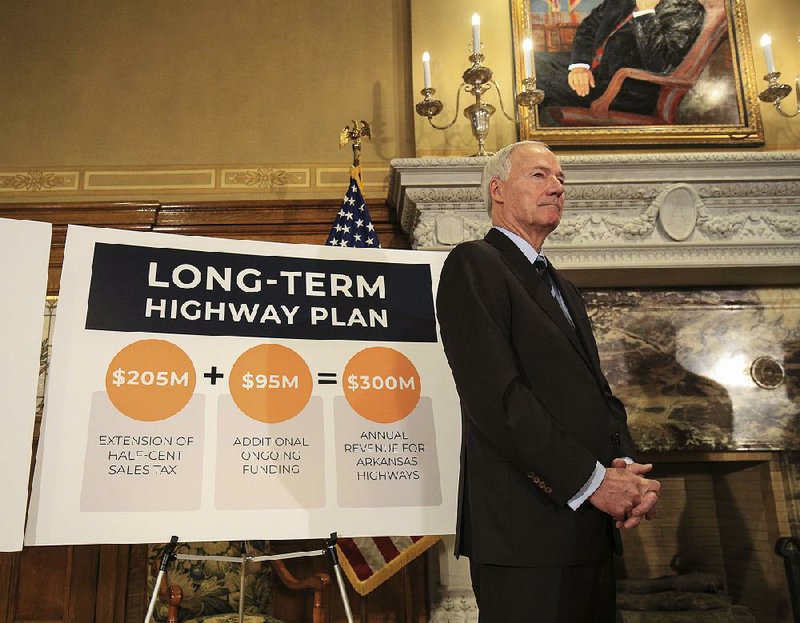 FILE - Gov. Asa Hutchinson listens Feb. 11, 2019 during a news conference at the state Capitol where he unveiled his highway plan. Legislative leaders were commenting about the proposal that would permanently extend a half-percent sales tax, increase fuel taxes and tap casino revenue.

Counties and cities also would receive about $114 million a year for their roads under this long-term highway funding plan.

The new wholesale sales tax on motor fuels would increase the tax on gas by 3 cents per gallon and on diesel by 6 cents per gallon. The new tax would be indexed, meaning it would grow by no more than 0.10 of a cent a year. The tax would require a simple majority vote for approval in the 100-member House and 35-member Senate, Hutchinson said.

"All the indications are that [tax increase] is absorbable and that is reasonable for the increased needs that we have in terms of highways," the Republican governor said.

"Even with these increased user fees, Arkansas middle and low income [people] will have net tax reductions this year as a result of $150 million per year tax reductions that we have already enacted [in 2015 and 2017] ... and then as a result also of the $60 million reduction this year that will go into effect on the grocery tax [from 1.5 percent to 0.125 percent]," he said.

The new wholesale sales tax on gas and diesel would raise about $58 million a year more for state highways, Hutchinson said. He spoke at a news conference with House and Senate legislative leaders and officials for the Good Roads Foundation and Arkansas Trucking Association at his side. The tax also would raise $26 million for cities and counties.

The governor also proposed dedicating $35 million at least a year from casino tax revenue and restricted reserve funds or other general revenue toward highways.

The plan also includes increasing registration fees for hybrid and electric vehicles to raise about $1.9 million a year, he said.

Hutchinson also wants lawmakers to refer a proposed constitutional amendment to voters in the 2020 general election to permanently extend the half-cent sales tax for highways. That tax was first approved by voters in 2012 and began in 2013 for a 10-year period. It would raise about $205 million a year for state highways and about $88 million for cities and counties.

"Every since the legislative session began, everybody has been asking me what is the governor's plan, what is my plan for a new long-term highway funding program for the state," Hutchinson said. "The more important question is, is what type of plan we can agree upon together, and that's what we have been working hard to do over the last few weeks and months."

The $300 million plan is the single largest highway plan in the state's history and it would allow the Department of Transportation to maintain roads and highways and also allocate additional funds for new lane construction, he said.

The plan "is the top dollar amount that in my judgment the people of Arkansas can afford," Hutchinson said. "There is a limit on how much we should spend and can spend because wherever we set a spending program someone has to pay for it.

"What guides me is the worker in a rural part of Arkansas that must drive 30 miles to work and back every day in their vehicle and put gas in the car. What guides my thinking is that farmer that has to get his products to market and is driving on a difficult road that is not properly maintained," Hutchinson said.

"This plan achieves the right balance. It is affordable. It is prudent for our budget and it is reasonable," he said.

But the state director for the Americans for Prosperity group, Ryan Norris, said, "The governor should focus on reforms that would rein in unaccountable government spending, such as the turnback funding arrangement, instead of increasing a tax that will hit the poorest drivers the hardest.

"It also doesn't make sense to negate the welcomed income tax relief to hard-working taxpayers. Gov. Hutchinson and legislators deserve credit for cutting taxes but they shouldn't turn around and take Arkansans' new-found money every time they put their car in drive," Norris said in a written statement.

Shannon Newton, president of the Arkansas Trucking Association, said, "We look forward to continuing to invest in Arkansas highways, so that [truck drivers' ] workplaces can be safe, so the roads can be well maintained for our equipment and so we can be better, more efficiently and reliably deliver our customers freight on time.

"We are very proud of this plan and we look forward to working with all the leadership and all the groups that are here today in ushering [the plan] through the General Assembly," she said.

Part of Hutchinson's plan counts on the state's gambling industry growing. In November, voters approved constitutional Amendment 100, which authorizes four casinos in state -- two at the racetracks in Hot Springs and West Memphis, which now offer electronic games of skill, and two more that would be built in Pope and Jefferson counties. The state Racing Commission will be in charge of licensing and monitoring casinos.

Hutchinson said the state will receive an estimated $31.2 million a year in general revenue from the gambling industry. The projection is less than what the state has been collecting because Amendment 100 dropped the tax rate.

"But that does not account for the growth that will happen when the casinos are in place and so the additional revenue that will come in through the casino investment will allow that money to flow to the [Transportation Department]," he said.

"The advantage of that is that, one, it is going to gradually increase ... and secondly, it is a guaranteed amount and, in the short years, we will make sure and guarantee that is $35 million a year. That is a guarantee from our restricted reserve fund, as well as whatever other sources we need to make sure that that commitment is made. But that protects the general revenue side because it is a new funding source that we didn't have before the voters put it in last year," Hutchinson said.

Under the old tax rate, the state collected $64.3 million in general revenue from Oaklawn Racing and Gaming in Hot Springs and Southland Gaming and Racing in West Memphis through their electronic games of skills in fiscal 2018, according to the state Department of Finance and Administration. Fiscal 2018 ended June 30, 2018.

In August, finance department officials projected the state would receive $36 million a year less in general revenue in both fiscal 2020 and fiscal 2021 and then $14.5 million less in fiscal year 2022 under Amendment 100.

Hutchinson said previous estimates were calculated before the announcement of expansions at Oaklawn and Southland involving hundreds of millions of dollars.

"So, there is a fresh look at it and there is a comfort level with this, based upon what we see over the long term as the growth in casino revenue," he said.

Hutchinson's proposed long-term highway funding plan is designed not to jeopardize general revenue that is critical for public schools, colleges and universities, and other state needs such as public safety, he said. State government's two largest sources of general revenue are individual income taxes and sales and use taxes.

Referring to Hutchinson's plan to cut the state's top individual income tax rate from 6.9 percent to 5.9 percent over a two-year period, Senate President Pro Tempore Jim Hendren, R-Sulphur Springs, said, "We realized that we can't be competitive in Arkansas with the highest tax rate of surrounding states."

"But we also stand here today, realizing we can't be competitive if our highways are falling apart, so we have to address both and I am proud ... that we are doing that," Hendren said.

House Speaker Matthew Shepherd, R-El Dorado, said, "This was a process that took time, even through the weekend, to reach a point that we felt we were comfortable that we had a plan that could garner the support that we needed on both ends of the Capitol.

"For me, with regard to the idea of potentially referring out the half-cent sales tax ... I thought it was important to show the people of Arkansas that we have tried to do some things differently, so I appreciate the governor's willingness to work with me and others with regard to the $35 million that provides us a good base of support from the funds that we already have available and then with the gaming revenue, the possibility of growing that amount over time is very attractive," he said.

"I think this will allow us to pick up a few more votes on the tax cut proposal," the speaker said.

Shepherd said the governor's income tax legislation will be considered in the House Revenue and Taxation Committee this morning and he expects the House to consider the bill later this week.

"We got to get our tax bill passed," Hutchinson said. "I want that passed and addressed this week."

State officials project it would reduce revenue by $97 million a year after it is fully implemented. The bill requires a three-fourths vote for approval because it would increase income tax rates on some taxpayers, but no taxpayers would be hit with a tax increase, according to state officials.

Before the governor's announcement Monday, House Democrats held a news conference to promote legislation to create a tax credit for low-income and middle-income taxpayers.

House Democratic leader Charles Blake, D-Little Rock, said HB1418 would reduce revenue by $78 million a year and he hopes the bill is presented to the House tax committee today.

But House Revenue and Taxation Committee Chairman Joe Jett, R-Success, said he doesn't expect the committee to consider McCullough's legislation today because the finance department hasn't provided a fiscal impact statement on it yet. He said he plans to let McCullough present the bill to the committee as soon as possible after the statement is completed.

During a meeting of the Legislative Black Caucus, Hutchinson's highway funding plan drew some criticism from several Democrats.

Rep. Megan Godfrey, D-Springdale, said in an interview, "There's a lot about the plan that we like.

"I'm glad the governor is making an investment in infrastructure, and I think it has a good balance," she said.

"We do want to ensure that it does what it says it does," leaving any services that depend on general revenue unharmed, Godfrey added.