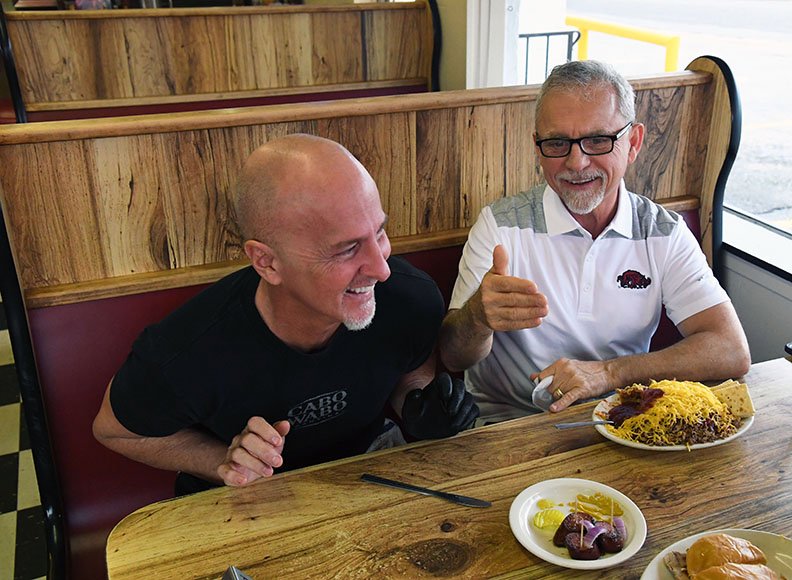 The Sentinel-Record/Grace Brown OLD FRIENDS: Roger Scott, right, a popular morning DJ with 103.7 The Buzz, shares a laugh with his old friend, Scott McClard, at McClard's restaurant Tuesday as Scott discusses his role in the recently released feature film, "Antiquities." The Arkansas set film has made the rounds of film festivals across the country and is now available to buy or rent.

Fans of morning talk radio may recognize a familiar face, or at least voice, of one of the eccentric characters inhabiting the set of Antiquities, the Arkansas-shot film which made the rounds of festivals around the country and is now available to buy or rent.

Roger Scott, who was born and raised in Hot Springs, is best known as part of the morning crew on 103.7 The Buzz out of Little Rock, but he has now added movie star to his resume with a role in the feature-length directorial debut of Benton native Daniel Campbell, a longtime friend.

Campbell had previously directed three short films, The Discontentment of Ed Telfair in 2013, The Orderly in 2011 and a short version of Antiquities in 2009. All three won awards at the Little Rock Film Festival.

Scott — who had a small role in the 2013 film and a major part in the Antiquities short — said he was "scared to death" Campbell would use someone else. The director had teased him he was in talks with comedian Ron White and actor Bradley Cooper for the part, but ultimately "he fought for me to do it," Scott said.

While Scott said he ad-libbed a lot in the original short, he "stuck to the script" for the movie.

"I was afraid to do any ad-libbing. He entrusted me with it and I was terrified of messing up. I studied hard every single day and memorized my lines. People have asked me if there are any outtakes with me but I didn't have any. Not to brag, but I was too intimidated by all these other actors to screw up," he said, laughing.

While Scott did not get to share the screen with Steenburgen, who plays a psychiatrist whose only scenes are with West, he said he worked with everyone else.

"I knew they were all professionals who make their living on this stuff and have been all over the place so I wanted to do well," he said.

Scott said the movie is "about a fella who comes back to town to find out about his father, who died in an automobile accident. His father worked at an antique mall so he goes there to try to find out more about him. The story centers around him basically trying to find himself and he meets a girl."

"I work in the mall. My mother owns the mall and is married to another fella I went to school with who is the same age as me so I'm bitter and just a jerk to everyone around."

Scott said the work that goes on behind the camera was incredible.

"Good night, those people work hard," he said. "The key grip. The best boy. Everybody had a job and they do it well. It took everybody to do what they did."

Scott met Campbell when both were working in sales at Magic 105.

"He started talking about doing movies. He left for a couple of weeks once and went to Memphis to shoot a film. I basically covered for him for a month," Scott said.

Scott said it took about 10 years after the original short came out to raise the funds for the new version. He said it was shown at multiple film festivals last year and then was released theatrically at "some big markets" to qualify for awards, including New York, Los Angeles, Seattle, Dallas and "about a dozen cities" for a week.

Scott said he has watched the movie "about half a dozen times now" including several times in Little Rock.

"I thought I was going to be the worst part of it," he said. "I was afraid I was going to be horrible, but it got great reviews. Watching it I can't help but notice how great and powerful everyone else is in it. I am able to separate myself from it."