Trump cool to border deal; plan pays for fencing, not a wall 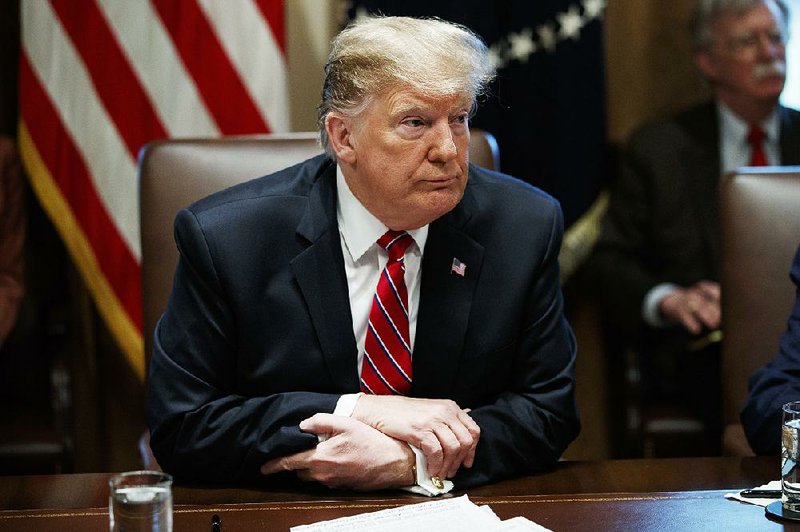 Despite his unhappiness with a congressional compromise plan with less funding for a border barrier, “I don’t think you’re going to see a shutdown,” President Donald Trump said Tuesday, adding that he was “using other methods” to build a wall.

WASHINGTON -- President Donald Trump said Tuesday that he was "not happy" about the bipartisan border security compromise negotiated by congressional leaders, but he gave no indication whether he would sign it before the midnight Friday deadline and avoid another government shutdown.

In his first comments since learning details of the deal, Trump said he would have to study it more before deciding what to do. The compromise includes $1.375 billion for new fencing along the border, far short of the $5.7 billion he demanded for a wall -- and less even than the deal that he rejected in December, triggering a 35-day partial government shutdown.

"Am I happy at first glance?" he said, responding to reporters at the beginning of a Cabinet meeting. "I just got to see it. The answer is no, I'm not. I'm not happy."

But he said he was "using other methods" to build the wall and played down the chances of another government shutdown. "I don't think you're going to see a shutdown," he said.

The measure, brokered by senior members of both parties from both chambers of Congress on Monday night, will be taken up as early as today by the House, which is controlled by Democrats, followed by the Senate, which is run by Republicans.

Top Republicans Mitch McConnell in the Senate and Kevin McCarthy in the House both claimed victory, bragging about Democratic concessions on new border barriers and a late-stage battle over the ability of federal authorities to arrest and detain foreigners living illegally in the U.S.

"You've got to remember where Nancy Pelosi was. She has said, 'No money for a wall.' That's not the case," McCarthy said on CNBC Tuesday morning. "The Democrats have now agreed to more than 55 miles of new barrier."

McConnell spoke with Trump by telephone Tuesday and urged him to accept the compromise.

"I hope he'll sign it," McConnell told reporters afterward. "I think he got a pretty good deal." He did not rule out overriding a veto if Trump turned against the compromise.

U.S. Rep. Bruce Westerman said he'd like to see a deal reached and signed into law.

"Shutdowns should not be bargaining chips or political threats, which is why I've always advocated for a return to regular order and passage of clean appropriations bills in a timely manner," the Republican from Hot Springs said in a written statement.

"I'm anxious to see what border security provisions this agreement in principle contains, and I hope Congress can put well-crafted legislation on the president's desk quickly, ending this threat of shutdown once and for all," Westerman said.

In a written statement, U.S. Rep. Steve Womack welcomed the apparent end of the impasse.

"I'm pleased there is general agreement on funding the rest of government. I look forward to seeing the details, talking with our border security experts, and finding a solution to avoid another costly shutdown," the Republican from Rogers said.

A spokesman for U.S. Rep. French Hill, a Republican from Little Rock, said the congressman would refrain from commenting on the agreement until he's seen the text of the proposal.

A spokesman for U.S. Sen. John Boozman said the Republican from Rogers is reserving judgment "until he has had a chance to review the text of the actual bill."

GOP leaders want to avoid another shutdown, after the last one forced 800,000 federal workers to go without pay for more than a month and cut into an array of crucial services from airport screenings to food safety inspections. Polls suggest that the public blames Trump more than Democrats for the shutdown.

The shutdown ended when Trump reopened the government with a short-term spending bill that provided no new wall money but gave Congress three weeks to come up with a deal.

Trump on Tuesday told reporters that he was still thinking about declaring a national emergency to bypass Congress and finance wall construction on his own authority, a move that McConnell has warned him against and that would almost surely be challenged in court.

But Trump seemed to be setting the stage for eventually supporting the compromise and avoiding an emergency declaration by emphasizing that he was already building the wall and was "moving things around" in the budget from "far less important areas" to finance it even without Congress.

No new walls have been built or financed by Congress in regard to the prototypes that the Trump administration unveiled in October 2017. Projects to replace or repair about 40 miles of existing barriers have been started or completed since 2017.

Construction of the first extension of the current barriers, 14 miles of a levee wall in the Rio Grande Valley sector, is set to begin this month, but a butterfly center has asked a judge to block the construction because the barrier would bisect its property.

In a motion filed late Monday, National Butterfly Center director Marianna Trevino Wright says heavy machinery has been driving through the property for a week, including a road grader accompanied by a U.S. Customs and Border Protection vehicle. Wright alleged that someone had cut the lock on a center fence and replaced it with a lock belonging to Customs and Border Protection.

The butterfly center and its governing body, the North American Butterfly Association, asked in the motion to ban government agents from "taking any action" on center property "in furtherance of the construction of a border wall."

The Department of Homeland Security did not respond to a request for comment Tuesday. But government lawyers filed paperwork saying they would respond to the butterfly center's request by Feb. 22.

In California, the 9th U.S. Circuit Court of Appeals rejected arguments in a similar case Monday.

California officials and environmental groups said the Trump administration exceeded its powers by waiving environmental rules to speed up construction of prototypes and replacement of the U.S.-Mexico border wall.

The 2-1 opinion upheld a lower court decision that found that the Illegal Immigration Reform and Immigrant Responsibility Act of 1996 allows the Department of Homeland Security to avoid lengthy environmental reviews to speed construction of border barriers.

The one dissenting judge said the case should have been thrown out because such appeals belong before the Supreme Court.

PUT IN A POSITIVE LIGHT

Republicans have repeatedly referred to the deal as a "big down payment" on a border wall and softened on the notion of transferring funding within the government to build more barriers.

McConnell said he had no objection to the president using whatever "tools" were available, and Sen. Lamar Alexander, R-Tenn., offered a specific proposal: the use of $800 million in drug interdiction funding to shore up border security in areas used by narcotics traffickers.

The agreement includes a provision that could give the Trump administration broad discretion to increase the number of slots to shelter detained migrants.

On its face, Monday's agreement, which still requires passage by both houses of Congress and approval by the president, authorizes the Department of Homeland Security to fund about 40,000 detention "beds," many of them in facilities run by for-profit companies and Immigration and Customs Enforcement itself near the border in Texas, Arizona and California.

In background briefings on the deal, House Democratic aides described the language as a "glide path" from the current level of 49,000 detention beds back down to levels of 35,000 or lower as seen under President Barack Obama's administration.

But a summary of the provisions drafted by Republican staff members on the Senate Appropriations Committee presents a different picture. The document, provided by an aide to a senator who was reviewing the compromise, places the average number of beds funded under the deal at a much higher number -- 45,274, including 2,500 slots for families.

And that number could rise to as many as 58,500 beds, Republican aides claimed in their internal communications. That is because federal Cabinet departments have some latitude in how they use funds.

Republicans put the deal in the best light as they sought the president's approval.

"The notion that Congress shouldn't spend more than one dollar on new border barriers, and the idea that we should impose a hard, statutory cap on ICE detainees in the interior of the country which would require the release of criminals into the United States" were rejected, McConnell said in a statement Tuesday.

Democrats played down the Republican notion that the deal gave expansive leeway to the Department of Homeland Security to move funding around to increase detention facilities.

"The only way the Trump administration will be able to ratchet up the number of detention beds is if they choose to steal funding that Congress has directed to other [Homeland Security] components for important Homeland Security activities," said Evan Hollander, a spokesman for the House Appropriations Committee Democrats. "Transferring funds away from national security is a reckless course that will make the country less safe."

Under the complex funding formula in the agreement, officials at the Department of Homeland Security, the parent department of Immigration and Customs Enforcement, would have "reprogramming authority" to transfer as much as $750 million from other Homeland Security programs into the detention program.

"In short, there is more than enough flexibility for ICE to respond to any forthcoming surges in illegal immigrations and apprehensions," the document's authors wrote.

Two Democratic aides with direct knowledge of the deal said the Republican memo was accurate in theory, but added that such a drastic expansion in the number of beds was unlikely because it would require taking funds from other important programs in the Department of Homeland Security, such as the Federal Emergency Management Agency's disaster relief funds. 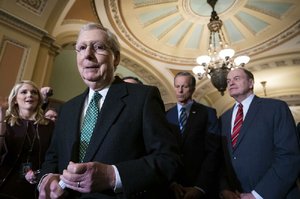 Photo by AP/J. SCOTT APPLEWHITE
Senate Majority Leader Mitch McConnell said Tuesday that he urged President Donald Trump in a phone call to accept the compromise plan on border security. McConnell did not rule out overriding a veto if Trump rejected it.