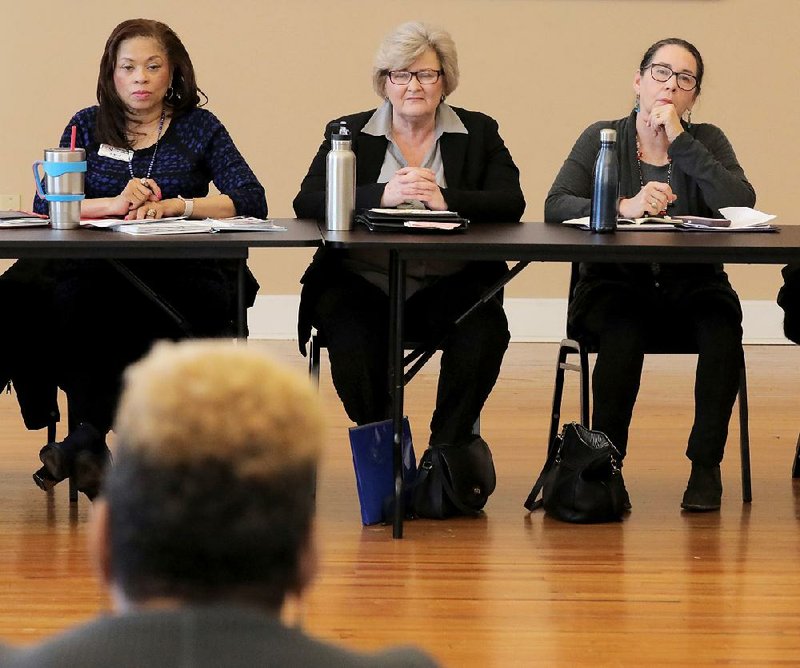 Little Rock City Director Capi Peck (right) talks Wednesday about an expansion of an effort to reduce homelessness in parts of the city during a meeting of the Arkansas Homeless Coalition. Others at the table are (from left) Sybil Ward, coordinator of community health at the Jefferson Comprehensive Care Systems Medical Center, and Homeless Coalition president Sandra Wilson. The meeting was held at the Willie L. Hinton Community Resource Center on West 12th Street in Little Rock.

An effort to reduce street homelessness by 25 percent in downtown and northeast Little Rock has expanded to include areas from the River Market District to the state Capitol and south to Roosevelt Road, slightly more than three months after the initiative was announced.

Little Rock in November announced a partnership with the Institute of Global Homelessness to cut street homelessness in Ward 1 by 25 percent. The goal was later expanded to include Wards 2 and 3, City Director Capi Peck, who represents Ward 4, said Wednesday.

Peck said a group of officials and service providers arrived at the decision recently after reviewing "where most [homeless] camps are located and where most feeding areas are located, and what we felt like we could grapple with."

Peck presented an update on the effort to February's meeting Wednesday of the Arkansas Homeless Coalition. The advocates and homelessness service providers meet monthly.

Molly Seeley, the institute's program manager for the project, said in a phone interview that adjusting goals after talking to more community members is common for what her group calls "vanguard cities," the municipalities around the world that are participating in the program.

"They were feeling like that kind of focus was going to be able to lift more folks [out of homelessness] more effectively," Seeley said.

This type of partnership is the first step the institute is taking to end street homelessness in 150 cities globally by 2030. The institute provides guidance and connects participants with resources.

"It'll be hard because these things are always hard, and homelessness is never simple. But the dedication is there," Seeley said of the goal.

Officials say they are hopeful that the plan can be fulfilled. Peck said the first step will be to review the data from the January count of the homeless, then to figure out the best steps to move forward.

The city is working toward the goal at a time when the unsheltered homeless population is rising nationally. In the most recent U.S. Department of Housing and Urban Development report to Congress on homelessness, the number of unsheltered people was up by 4,300.

In the Little Rock metropolitan area, 55 percent of the 990 homeless people counted in 2017 were living in the woods or on the streets. The numbers from January's count aren't available yet.

"There's been a lot of division within the coalition in the past, but in the past, I would say, 12 months, there's been so much collaboration," Peck said. "... And I think that division is slowly fading and that people have a real commitment to address the unsheltered. I feel very optimistic about it."

Peck went to Chicago in the spring of 2018 with City Manager Bruce Moore to learn more about the institute's program. Officials from the Institute of Global Homelessness visited Little Rock in November to tell service providers about the plan. Little Rock was the eighth city to join the initiative.

There are 10 participating cities across the world so far, and all have agreed to reduce or end street homelessness -- whether citywide, in a certain population or in part of the city, according to the institute's website.

Homeless Coalition President Sandra Wilson said that as long as organizers for the city's push stay in contact with coalition members, the initiative will be successful. Wilson is an ex officio member of the "vanguard city" steering committee.

The coalition has been working in smaller groups on issues such as transportation, health care, employment and shelter needs for the homeless. Members helped push to get 1,000 free bus passes for the homeless, a program that started this month.

"I feel hopeful with this being something we can work together as long as we keep this coordinated," Wilson said.