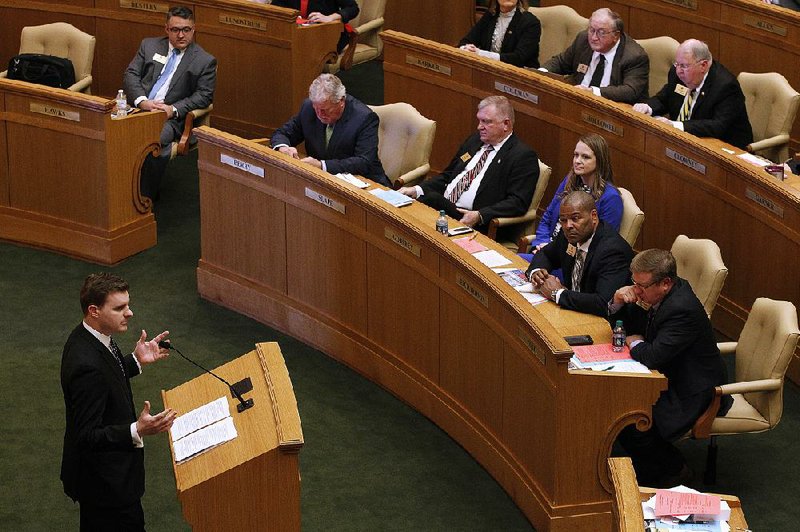 Wednesday was the deadline for lawmakers to introduce proposed state constitutional amendments. It’s also the day that the House adopted a resolution calling for a national convention to consider amendments to the U.S. Constitution. Senate Joint Resolution 3 was introduced by Rep. Austin McCollum, R-Bentonville. The national convention would consider proposals to impose budget restraints and term limits on Congress.

Thirty-one proposed amendments to the Arkansas Constitution were filed Wednesday by lawmakers right before a deadline to do so.

The proposals join more than a dozen others filed during the first month of the session.

The Legislature now may pick up to three of the proposals to place on the general election ballot in 2020.

While the possibilities before lawmakers cover a broad range of topics -- from an end to unpaid prison labor to the qualification of judges -- many of the amendments overlap in their purpose, their titles together reading like a shopping list of legislative wishes.

Among the amendments filed Wednesday were seven dealing with term limits; six to amend the process for amending the constitution; five regarding highways; three proposing some form of tort reform; and two addressing how often lawmakers meet in Little Rock.

The Legislature has repeatedly tried, dating back almost two decades, to enact caps for lawsuit damages.

A plan to fund highways -- possibly through a half-percent sales-tax renewal touted by Gov. Asa Hutchinson -- is also likely to be one of the three amendments referred by the Legislature, Hendren said.

"The third one, I don't know, there's a lot of things out there," he added.

Hours before the 5 p.m. Wednesday deadline, two Democrats held a late-morning news conference to raise awareness for their proposed amendment to strike six words from the state constitution's slavery ban: "except as a punishment for crime."

Rep. Vivian Flowers, D-Pine Bluff, said Arkansas is one of two states, the other being Alabama, that continue to work inmates without pay in state prisons, which she called a modern-day form of slavery.

"There can be no exceptions for slavery," Flowers said.

While Flowers made a point of saying her proposal was not intended as a slight toward the Department of Correction -- which she said was merely acting according to its budget and state law -- a spokesman for the state prison system said the amendment would be untenable "without a substantial increase in funding."

The spokesman, Solomon Graves, said that inmates assigned to work-release programs before their release from prison are paid salaries by their employers, and that prisoners who are not paid for labor inside the prisons earn "marketable experience" they can use to later find jobs.

Other proposals filed at the deadline were devoid of detail; they are known as "shell" proposals.

Shell bills are filed before legislative filing deadlines with a stated purpose in their titles, but without detailed text in the body of the legislation. They can be amended later, after the deadline, to include the proposed changes to current law.

For example, one shell amendment, filed by state Sen. Mark Johnson, R-Little Rock, simply states that its purpose is to "amend the Arkansas Casino Gaming Amendment of 2018." Other shell amendments filed Wednesday dealt with the election of political party candidates, taxes on personal property, and the biennial fiscal sessions of the Legislature.

Johnson was one of several lawmakers to propose changing the process through which the constitution itself can be changed or for the people to propose initiated acts.

In addition to legislatively referred constitutional amendments, residents may gather signatures to place their own proposed amendments or laws on the ballot. The number of amendments to the constitution, now numbering more than 100, has prompted calls by some to change the process. The state constitution dates to 1874.

Johnson's proposal would increase the threshold for voters to approve an amendment from a majority to 60 percent. If a majority of voters voted for an amendment, but it fell short of the 60 percent threshold, the amendment could still become part of the constitution if it were ratified by three-quarters of the quorum courts in Arkansas' 75 counties.