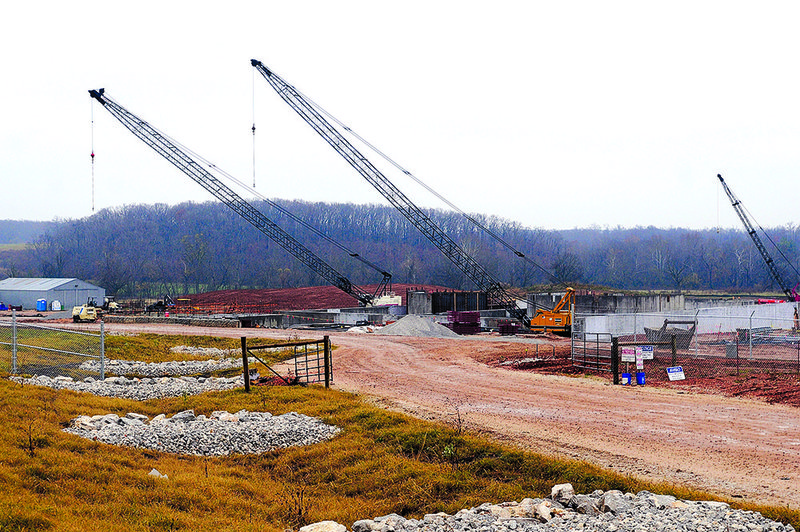 BENTONVILLE -- Much of the 9 miles of pipe between the regional wastewater plant and the city needs to be repaired or replaced less than a decade after being installed.

The estimated cost to fix the problem is $38 million, according to officials.

"That's a big number," said Mike Bender, public works director. "That's a monster. We have to figure out how to kill it."

Officials aren't sure who's going to have to pay for it but are looking at who might be legally responsible.

The Northwest Arkansas Conservation Authority hired ACE Pipe Cleaning to assess 47,084 feet of sewer pipe in February 2018 after three cracks were found and one pipe collapsed between March 2016 and June 2018, according to Mike Bender, public works director.

The authority hired Fayetteville-based RJN Group in August to review the assessment and provide recommendations.

Bender went over the firm's preliminary report with City Council members during a Committee of the Whole meeting Monday. The authority's board heard the report in January.

The geotechnical review, which will provide more information about water and soil conditions, is anticipated to be completed by the end of next week and could affect the report's final results and recommendations, Bender said.

The assessment looked at the pipe's overall condition as well as the degree to which its shape changed from its original structure.

"It's like if you take the cardboard out of your paper towel roll and squish it," Bender said.

There is 15,227 feet -- nearly 3 miles -- of pipeline that has more than 7.5 percent degree change and needs immediate replacement, which is estimated to cost $16.8 million, according to the report.

"I don't have confidence in any of that line, not even the 1,700 feet," Bender told council members. There are some sections with more than 17 percent change, he said.

A phone number to Hobas' office in Houston kept ringing without giving an option to leave a message. An email sent to the company wasn't returned before 5 p.m.

The pipe was installed from April 2009 to June 2010, and the wastewater plant began operating in November 2010.

Construction of the line was about $10 million. That doesn't include the engineering services, which are included in the $38 million estimate to repair and replace the line, Bender said.

The authority owns the pipes and has all of the contracts and documents related to the pipes and their installation, Bender said Wednesday. The city is working on getting those documents and working with the authority to research warranties as well as other aspects like insurance and contract specifications.

Jon Terlouw, council member, asked what the authority's responsibility is for this situation.

"The problem is that any responsibility that NACA has comes back to the city," Spence said. "NACA is merely a pass-through entity, and 97 percent of NACA is the city of Bentonville."

The authority has 10 Northwest Arkansas cities on its board but only three paying customers: Bentonville, Tontitown, and the newest customer, Elm Springs, joined in 2017.

Chad Goss, council member, asked about the urgency to find a short-term solution.

"The urgency for me is that we can't do it fast enough," Bender said, mentioning parts of the pipes with more than 17 percent deflected. "It could collapse at any minute."

The short-term solution is communicating with the plant as it monitors the flow and taking action should a failure occur, Bender said.

"Basically, if we aren't able to find someone legally to pin this on, we're looking at needing to come up with $38 million?" Aubrey Patterson, council member, asked.

A few people responded with "yes."

Bentonville isn't the only city that's had issues with Hobas Pipes.

Hobas Pipes was one of three entities officials in Franklin, Tenn., filed a lawsuit against last summer after part of the city's sewer system broke in 2017, according to news reports.

The city is suing the pipe company for a breach of warranty and negligent misrepresentation. The case is still open, according to a clerk at the Williamson County Chancery Court where the suit was filed.

The Northwest Arkansas Conservation Authority has 10 cities on its board and only three paying customers: Bentonville, Elm Springs and Tontitown. All member cities paid a share to help establish the authority, but the construction costs of the plant, lines to it and treatment costs are paid by cities using the plant. The 10 member cities are Bentonville, Bethel Heights, Cave Springs, Centerton, Elm Springs, Highfill, Lowell, Springdale, Rogers and Tontitown.