There's a lot of grit and grime in Tim Sutton's would-be elegiac opioid drama Donnybrook, which plays like River-period Springsteen with all the hope and decency bled out.

Jarhead Earl (Jamie Bell, best known for his turn as an 11-year-old working-class ballet dancer in 1999's Billy Elliot) is a desperate man. A former Marine with addict wife Tammy (Dara Tiller) and young children Scout (Rhyan Elizabeth Hanavan) and Moses (Alexander Washburn), he crossed a personal Rubicon. He's decided the last best hope for him and his family ever attaining anything in this land of hope and dreams is for him to enter and win the Donnybrook, a myth-infused off-the-grid bare-knuckle death match that the rough and suicidal ante up for with the hope of winning $100,000.

Rating: R, for disturbing violent and sexual content, drug use, language, and some graphic nudity

And Jarhead looks tough and pestilent enough to give it a go -- Bell's a terrier of a man, scrappy and insolent with the lethal economy of a trained killer. But he's also undersized, and no match for sociopathic Chainsaw Angus (Frank Grillo), who beats Earl senseless a few minutes into the movie. That's what you get when you try to come between your wife and her drug dealer.

The virtues of the film are evident from the start: Sutton establishes an otherworldly atmosphere while nailing just enough specific details to locate us in a recognizable reality -- an upstate New York removed from the suburb gentility in which the first half of the other recent prescription drug horror film, Ben Is Back, is set. It's creepy but it might remind you of a lot of places removed from America's urban centers. (Think of Debra Granik's Winter's Bone or the Renaud brothers' devastating 2017 documentary Meth Storm: Arkansas U.S.A.)

While the characters are largely tropes, they're compellingly played. Bell's performance is contained and convincing; Earl is a tool with a singular purpose. Grillo's Angus is a revelation, a remarkably charismatic villain who, like Anton Chigurh in No Country for Old Men, is a force of pure sadistic nihilism. More complicated is Angus' sister Delia (Margaret Qualley), who oscillates between femme fatale and a victim of Stockholm syndrome.

Yet as visceral as it is in its strongest points, Donnybrook, based on a novel by Frank Bill, can't withstand too much scrutiny. Jarhead is the nominal hero, so we're supposed to empathize with his decision to grab a shotgun and knock over the local pawn shop, breaking the proprietor's nose in the process, because he only steals enough to cover his $1,000 entry fee. And we're supposed to accept that the local sheriff (James Badge Dale) would advise the pawn shop owner to get over it because, well, there are worse things than a vet trying to win a fight to help out his family.

Sutton is at this point a better director than writer, and while one might assume that a lot of dialogue comes directly from Bill's book, that doesn't excuse its on-the-nose risibility.

While the movie works in a modest genre thriller sort of way (though the last half-hour is anticlimactic), if we're to judge a movie by how well a director succeeds at accomplishing what he set out to accomplish, then Donnybrook is at best a demonstration of Sutton's technical abilities.

It aims higher than Alex Pettyfer's Back Roads, from last year, but I'm not sure it says anything more profound about forgotten Americans. Donnybrook is OK as long as you take it for what it is instead of what it pretends to be.

Bell and Qualley do solid work; Grillo has the potential to be something special. But they all need better taste in scripts. 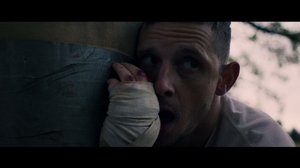 Jarhead Earl (Jamie Bell) sees only one chance to save his family in the grim thriller Donnybrook — he liter- ally has to fight for them.