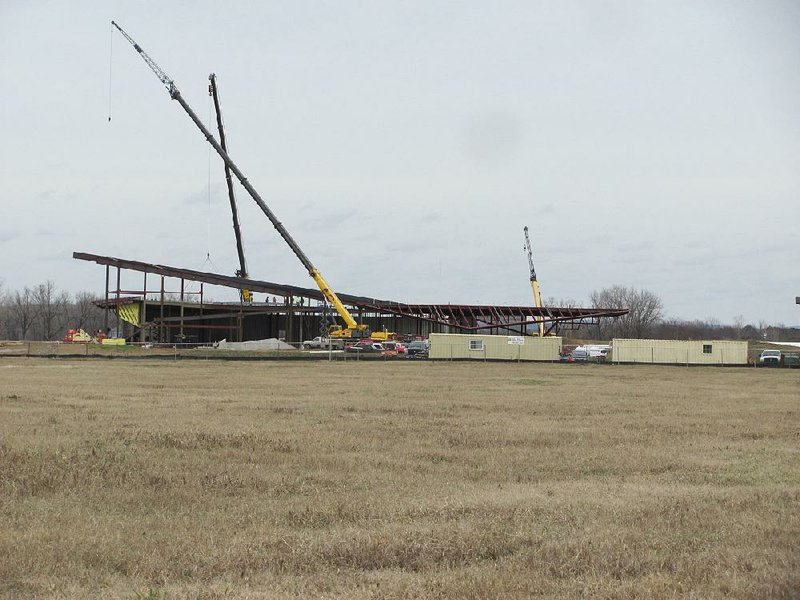 Construction crews work Thursday on the steel framing of the 50,000-square-foot U.S. Marshals Museum in Fort Smith. Officials have pushed back the opening date of the museum until next year. ( Dave Hughes)

FORT SMITH -- Officials at the U.S. Marshals Museum are pushing back the opening date of the museum until next year.

Patrick Weeks, the museum president, told about 40 people at a community meeting Wednesday night that he couldn't make plans to begin production of the exhibit experience for the 50,000-square-foot museum until he knew whether Fort Smith voters would approve a temporary 1 percent sales tax to pay for finishing the facility's interior.

He said construction of the building on the banks of the Arkansas River did not get underway until July when it was certain that the museum had the $19.1 million to pay for it. The same goes for the exhibit experience.

"As with the building, we won't push go on production of that experience unless we can righteously say where that money is coming from to pay for it," Weeks said.

The special election on the nine-month tax is March 12 with early voting starting March 5. If it passes, the tax is expected to generate $15.5 million over nine months. Once the financing stream is established, Weeks said, the schedule for the museum experience can be drawn up and put into motion.

More rainy days than normal have slowed the work, as well, he said.

Weeks said the museum building will be dedicated Sept. 24. Museum officials had planned to open the museum that day in observance of the 230th anniversary of President George Washington's establishment of the oldest federal law enforcement agency in the country.

"So, we are into 2020 with the grand opening of a fully functional museum," he said.

A man at the meeting said he didn't have any children and seldom went downtown near where the museum is. He asked what was in it for him to pay the extra tax.

Museum Foundation President Jim Dunn said some people won't see a direct benefit from the museum, but the community as a whole will profit from having 125,000 people a year travel to Fort Smith to visit the museum.

Museum officials have said the museum will have an annual economic impact of $15 million to $22 million.

Responding to another question, Weeks said it will cost $2.5 million to operate the museum for a year. Admission fees, retail sales, food and beverages, facilities rentals and other income will pull in $1.9 million.

The remaining operating revenue, $600,000, will be obtained through fundraising, which Weeks said most museums must undertake to pay the bills. Dunn said the museum will have a full-time marketing director who will oversee fundraising.

To use taxpayer money for the museum, Fort Smith city directors voted to establish a public facilities board that would buy and own the museum property and building. The board would lease it to the museum officials who would run the museum.

Fort Smith city government would have no role in the museum other than providing the tax money, if the tax is approved, and appointing members of the facilities board.

"The nonprofit corporation [the museum] will pay all costs of operating the Marshals Museum with the city and public facilities board having no liability for such costs," the ordinance said.

Museum officials said the museum will pay the cost of the special election.

Dunn said the initial five members of the board will be Fort Smith residents appointed to staggered terms by Mayor George McGill. Replacement members will be appointed by city directors.

One thing the museum staff has to deal with every day is the disbelief that this will be only a nine-month tax, Dunn said.

"It is a nine-month tax that passed," he said. "It is written into the ordinance itself, and there will be no extension or replacement tax. It will end."