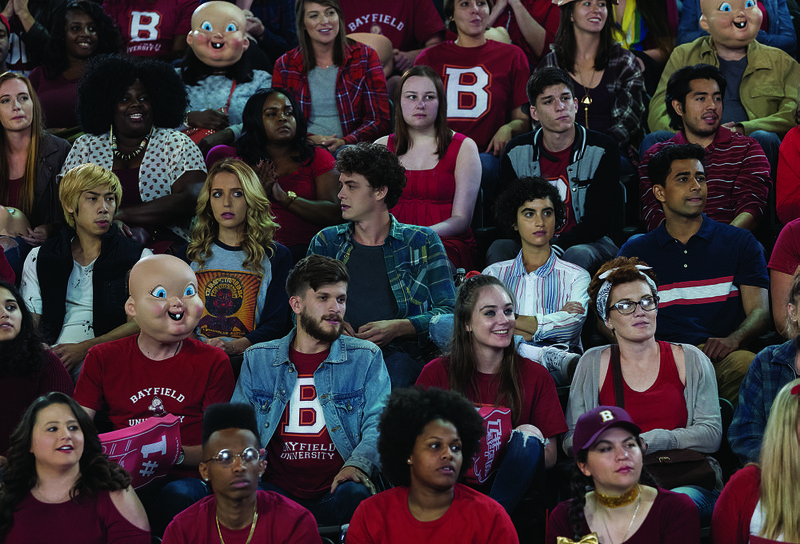 Smack in the middle of the campus crowd, Flower (Jessica Rothe) and her boyfriend Carter (Israel Broussard) find themselves caught in a endless loop that’s apparently a feature (not a bug) of the horror comedy Happy Death Day 2 U.

In some other dimension, Christopher Landon's Happy Death Day and Happy Death Day 2U might offer something more than a tired setup and diminishing jolts and giggles. Because our heroine Tree (Jessica Rothe) keeps waking up after having been brutally murdered the night before, there's little sense of danger.

If you know that you really are bound to repeat the same day the way Bill Murray did in Groundhog Day, it's hard to get frightened despite repeated jump scares. Worse, the attempts at humor seem to come from Landon getting bored with the premise. If he has stopped taking the idea seriously, why should we?

Landon's opening hints that he might be trying to make something more substantial out of the second installment. The Universal logo splits across the screen, and the new movie begins with Ryan Phan (Phi Vu) waking up in his car because he has been "sexiled" by his lucky roommate Carter (Israel Broussard), who happens to be Tree's boyfriend.

If you've endured the first film, you already know that. This time around Landon bothers to explain why his characters are stuck in a loop. Ryan and his pals Dre (Sarah Yarkin) and Samar Ghosh (Suraj Sharma) have invented a device they've dubbed "Sisyphus" or "Sisy," and it allows the users to open up other dimensions. (Obviously, they haven't seen Spider-Man: Into the Spider-Verse because opening doorways into other dimensions leads to trouble.)

As "Sisyphus" implies, the students, like the character in Greek mythology, are forced to re-enact the same grueling moments repeatedly. Landon's science and mythology are pretty sketchy. Apparently the film's Bayfield University has less than rewarding coursework.

As the students mangle history, science and literature, one wonders why the Louisiana Board of Regents has allowed the school to stay open. Their mascot, the Babies, is a sure sign nobody at the school, especially their Dean (Steve Zissis), has thought anything through clearly.

For a guy running an institution of higher learning, this Dean makes Animal House's Dean Wormer seem like a management prodigy. Somehow, he can't grasp that a student (Rachel Matthews) with a lousy accent and white cane isn't French or blind.

Humor and horror aren't his strong suits, but when Landon branches out into sentimentality, he handles that dangerous stuff in a fulsome, awkward manner as well. As Tree wrestles with the fact that dimension-hopping can kill some of her loved ones and spare others, it's hard to share her dilemma. The characters are so thin, they're impossible to miss.

A tedious coda suggests Landon is preparing a third installment. Perhaps his characters will do us a favor and close the loop before he gets too far. 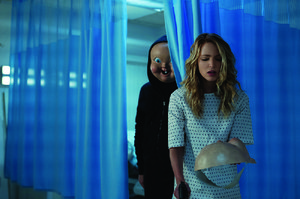