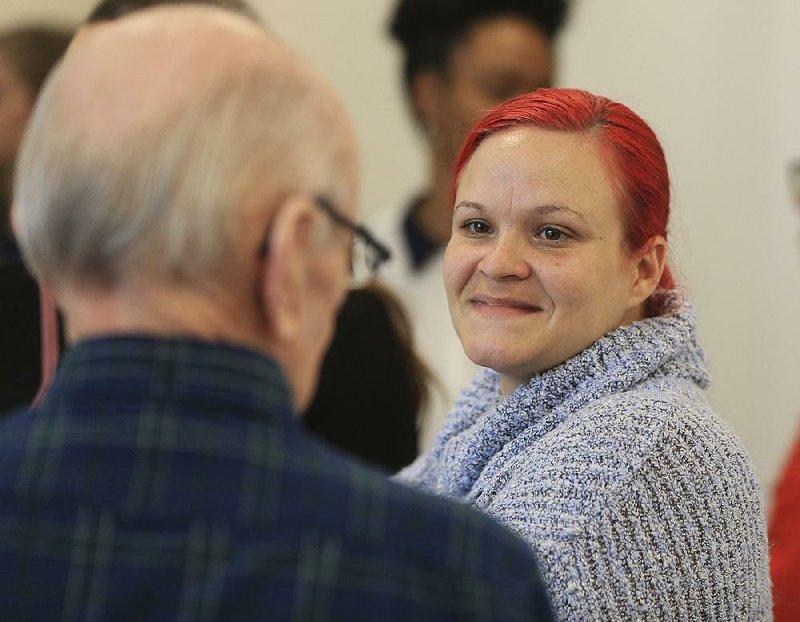 Our House resident Heather Meadors talks Thursday with Don Steely after a news conference to announce a partnership with Cities for Financial Empowerment Fund, Bank On Arkansas+ and First Security Bank to get Our House clients enrolled in bank accounts. Meadors was one of the first to take advantage of the program and get a bank account.

When Heather Meadors first went to Our House, a Little Rock homeless shelter, she was fresh out of prison and unsure how to move forward, but now she has a job, a bank account and is starting to chip away at her debt.

Meadors, 30, is a part of the first group of 11 people participating in Our House's new partnership that will give 150 homeless and near-homeless people in central Arkansas bank accounts and financial literacy training during 2019.

Officials announced the program Thursday. It kicked off a couple of weeks ago, and Our House received $50,000 to spend on the program during 2019 from Cities for Financial Empowerment Fund. The New York group works with municipalities to "improve the financial stability of low and moderate income households," according to its website.

The group chose the Our House initiative as one of six pilot programs of this type to fund this year. Our House provides job training and other help for the homeless and near homeless.

"I have been in trouble with banks before, and I needed a second chance," Meadors said.

She got out of prison in August after serving time for drug-related offenses and aggravated assault. She went to a halfway house until September, when she found Our House.

She's in training there to be an administrative assistant.

Meadors said one of the most helpful parts of the program is the one-on-one counseling.

"Before, I would just spend everything I had," she said.

But now she has a spreadsheet that she uses to plan her finances -- how much she can spend on gas, car payments and paying off her fines.

"We always set our sights higher," said Ben Goodwin, executive director for Our House. "Our goal is not just to find someone a home, but to provide them financial stability."

Our House clients who participate in the program are starting their accounts at First Security Bank with guidance and support from Bank On Arkansas+. The statewide coalition of banks, financial leaders, nonprofits and government agencies aims to help people attain affordable banking.

Staff members from First Security Bank are providing financial counseling to Our House clients like Meadors, Goodwin said. Bank employees go to Our House every Monday to teach financial literacy classes and get the process of opening a bank account started.

On Wednesdays, clients go to the bank to open accounts and get debit cards. The accounts can help repair credit, said Abby Hughes Holsclaw, a representative for Bank On Arkansas+.

Holsclaw said people in Arkansas who don't have a regular bank can spend hundreds of dollars more per year on financial services than people who have a bank.

"That helps create a game-changer and a difference-maker in the city of Little Rock," Scott said. 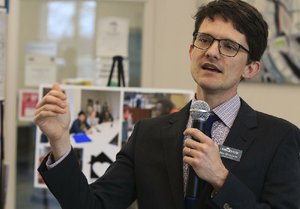 CORRECTION: The bank accounts given to the homeless in Little Rock through a program at Our House don’t allow overdrafts. An earlier version of this story incorrectly stated that the bank accounts have overdraft protection.