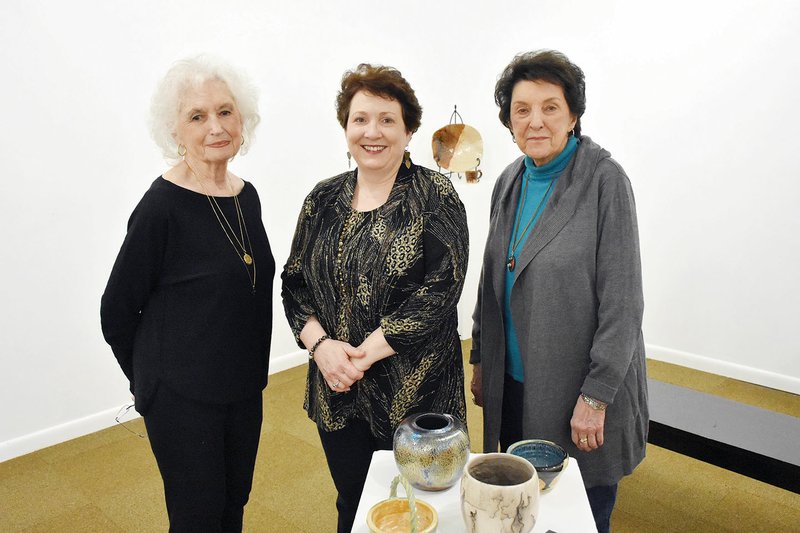 The River Valley Arts Center will present the 12th annual Beaux Arts Awards ceremony March 2. Among those to be inducted are, from left, Toni Bachman, Mary Clark and Paula Sanders Steel. The honorees are shown here in a gallery at the arts center where works are currently on display by student potters, who have taken classes from River Valley Arts Center Artist-in-Residence Winston Taylor, who designed the award that is given to the honorees. ( Staci Vandagriff)

RUSSELLVILLE — The arts will take center stage March 2 when the River Valley Arts Center inducts five recipients into the Beaux Arts Academy. Inductees will be honored during an awards banquet set for 6-9 p.m. at the Lake Point Conference Center.

“Dedicated to the advancement of all art forms, the annual awards are presented to encourage excellence in art and recognize and honor all the many enormously talented area artists and supporters,” said Tanya Hendrix, director of the River Valley Arts Center. She said recipients might be selected for a body of work or for years of continuous service, or for an individual extraordinary accomplishment.

Following is a brief look at this year’s honorees:

When told she would be honored this year, Bachman’s reaction was, “No, no, no. I am not an artist,” she said.

“But then I learned it was the Lifetime Achievement Award. I have spent a lifetime supporting this arts center, so that’s OK. I have served on the board of directors at three different times. In fact, I was a member of the organizing group,” Bachman said.

“Little by little, we have built this arts center into what it is today,” she said. “I want this arts center to have value to the community. When people think of Russellville, I want them to think of the River Valley Arts Center first.

Born in Allentown, Pennsylvania, Bachman has lived in Russellville since 1965. She is a registered nurse and was director of nursing at Legacy Heights Nursing Home, retiring in 2013 after 32 years of service.

Additionally, Bachman is a member of Central Presbyterian Church, where she has been a deacon and an elder, and a member of the Lions Club. She also supports The Center for the Arts at Russellville High School and the Arkansas Symphony Orchestra.

John Gale, associate professor of film at the University of Central Arkansas in Conway, will present Bachman with her award.

“I have known Toni for several years through my connection with the River Valley Arts Center,” said Gale, who was at Arkansas Tech University for 21 years before accepting his job at UCA. “Toni is clearly deserving of this recognition. She has been a leader in our arts community for many years. She gives her time to the Arts Center and to other community endeavors, freely and unconditionally. Because of her dedication to the arts, the River Valley’s quality of life is greatly enhanced. Ms. Bachman is a leader in both word and action.”

Patron of the Arts Award

Mary Clark will receive the Patron of the Arts Award.

A native of Russellville, Clark is director of marketing and public relations at the University of Arkansas Community College at Morrilton.

“I am extremely honored and humbled to be receiving this award,” said Clark, who was a member of the River Valley Arts Center Board of Directors from 2005 through 2018.

“It’s humbling to be chosen by board members that I’ve served with for a number of years. I am passionate about the arts. It’s nice to be recognized as a supporter … a patron … of the arts,” she said.

“My mother exposed me to the arts at an early age,” Clark said. “I took 12 years of dance and began piano lessons when I was in fourth grade. I played trumpet in the band from sixth through 12th grade … never first chair, however. I loved the camaraderie of it.

“Looking back, all of that has made me appreciate all of the arts.”

Clark also serves on the Russellville Symphony Guild Board of Directors, which raises money to bring the Arkansas Symphony Orchestra to Russellville for both a community concert and a children’s concert, as well as to fund music scholarships for Arkansas Tech students and symphony quartet visits to local elementary schools.

TV and film actress Natalie Canerday of Russellville will present Clark with her award.

“Mary Clark is one of my lifelong friends, and I am so honored to present her award,” said Canerday, who recently appeared in HBO’s Season 3 of True Detective and in the films Sweet Inspirations, playing now on Pure Flix, and To the Stars, which just debuted at the Sundance Film Festival. “She deserves it more than anybody I can think of because she truly is a patron of the arts.

“She has spent countless hours for decades to promote and help our arts center and our annual symphony performance, as well as our Downtown Art Walk. She even encourages and promotes our visual artists — all while holding down a real job. I am in awe of Mary Clark and am so proud to call her my friend.”

Schultze is the theater teacher and thespian-troupe director at Russellville High School, and Stahl is the technical director at The Center for the Arts, which is housed on the high school campus.

“I consider being a recipient of the Beaux Arts Award as one of the top honors of my professional career. It is always inspiring to know that the place I have come to love and call home sees my work as a significant contribution to our arts community,” Schultze said.

“My first musical with the Russellville School District was in 2007. Prior to that, I have performed and directed shows in Virginia, California and Georgia,” she said.

“Restarting the musical program in the Russellville School District has been a thrilling experience,” Schultze said. “Our first few years, we performed in the old Gardner Auditorium. Making the jump from Gardner Auditorium to The Center for the Arts in 2012 was a gigantic moment for our program. Having Daniel Stahl join our department was another leap toward a professional-quality program.

“Our students have been invited to perform at the prestigious International Thespian Festival every summer since we started attending in 2008. The students in our district are talented beyond measure in both performances and in their academic pursuits. Graduates of the Cyclone Theatre program have gone on to work as professional actors, directors and producers, as well as doctors, lawyers and community leaders. I love what I do and have been blessed in this journey with amazing Russellville students and teachers.”

Stahl said he began theater at Arkansas Tech University in Russellville in 1997.

“From there, I started a production company, Black Hat Productions Inc., and produced several dinner-theater shows in Russellville. In 2002, I started work at Clarksville High School as the theater teacher and fine-arts-center director. I also began working my summers with the Arkansas River Valley Arts Center as the technical director for more than 10 productions,” Stahl said.

“In 2011, I moved from Clarksville to the Russellville School District as the technical director for The Center for the Arts. I also began teaching a stagecraft class for high school students,” he said.

“Working with Stephanie Schultze these past eight years, we have developed the theater program into one of the best in our state. In the past 20 years, I’ve been involved in over 65 shows, with no plans to slow down anytime soon,” Stahl said.

“And now, to receive a prestigious award such as the Beaux Arts Award for performance is a humbling accomplishment. As a ‘techie,’ I don’t seek the spotlight, so as such, some of the hard work goes unnoticed. This award is a reaffirmation that what we do ‘in the dark’ makes a difference, too,” he said.

Dustin Jackson, oral communications and theater teacher at Russellville Junior High School, will present the awards to Schultze and Stahl.

“Stephanie Schultze and Daniel Stahl are both mentors and role models for creating and maintaining a successful educational arts program,” Jackson said.

“Mrs. Schultze was my wife’s theater teacher in eighth through 12th grades and one of my mentor teachers in college. She has directed masterpieces onstage in Russellville for going on

13 years, and she continues to awe audiences and sometimes even joins in the performance, like in her last role of Lady Augusta Bracknell in The Importance of Being Earnest,” Jackson said.

“Daniel Stahl has been my mentor in the technical aspects of theater, and I have logged somewhere around 150 hours in the theater per year for the past five years,” Jackson said. “Mr. Stahl has a gift of taking a directorial vision or design and creating the

‘mise-en-scene’ (the arrangement of scenery and stage properties in a play) that gives the script a unique life on our stage. I have learned everything I know about sound, lighting and set design from working alongside Mr. Stahl.

“Our theater program has a wealth of educational opportunities because these two are a part of the Russellville School District.”

Paula Sanders Steel will receive the award for Visual Arts.

“I feel very honored and grateful for this award,” she said. “I was very surprised. I have made art all my life but did not go back to school until I was 50. I received my Bachelor of Arts degree in art from Cameron University in Lawton, Oklahoma.

“I moved away from Danville and was gone for years, but retired and moved back in 2002. It’s my hometown. … I love it.”

Steel is a daughter of the late Omer and Ethel Sanders, who founded the Yell County Telephone Co., now known as Arkwest Communications and operated by Steel’s brother Todd Sanders.

She is a member of the Arkansas League of Artists and the River Valley Arts Center. Her work hangs at Gallery 307 in Russellville, the RVAC in Russellville and her own Gallery in Danville, formerly Running Deer Retreat.

Russellville artist Jeannie Stone will present the award to Steel.

“The first time I met Paula is when she welcomed me into her home for a weeklong painting retreat. I was new to painting and unsure if I belonged,” Stone said.

“Paula and her lovely daughter, Jeananne, who ran the kitchen during the retreat, put me right at ease with wine, nibbles and plenty of encouragement,” Stone said. “You see, Paula knows the secret of art is not to hoard it, nor to clamor over each other to earn our prize in competition, not to feign superiority. Paula uses art to bring us together and carry us home. In her quiet and gracious way, Paula is an artist who creates masterpieces, whether she uses paints and brushes or not.

“I own a Paula Steele painting of an empty boat resting on the edge of a lake. That painting spoke to me when I saw it at a local gallery. It still speaks to me of peace and beauty. Paula can’t help but infuse herself in

Guests at the Beaux Arts Awards banquet will be served a plated dinner of maple bourbon pork loin, roasted potatoes, baby carrots, cheesecake and a beverage.

“This is a black-tie event … at least a suit and tie and your Sunday-best,” she said.

Individual tickets to the 12th annual event are available for $50 from 10 a.m. to