Couple mentor others through life groups 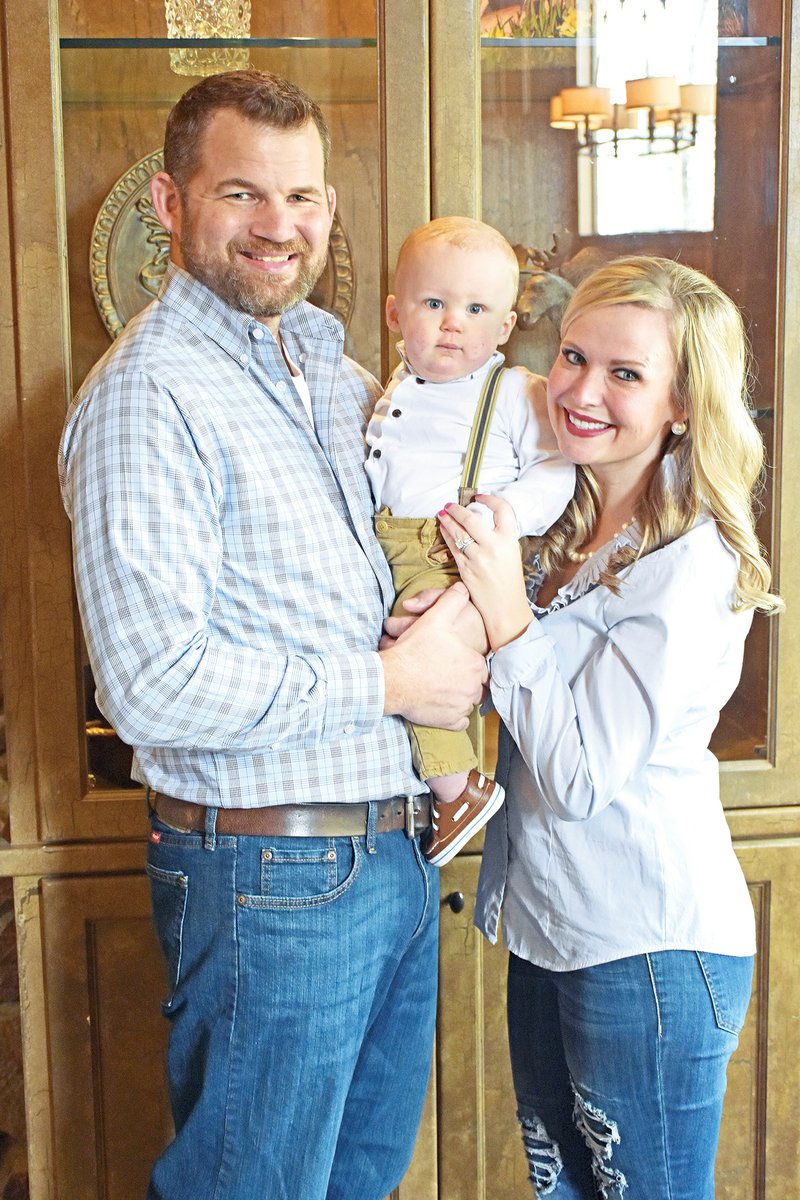 LITTLE ROCK — The very first date Ashley Porterfield and her now husband, William Porterfield, went on was to a mutual friend’s wedding.

“We sat in the back, one of the back pews of the church,” Ashley said. “It took him five years to propose after that, so I don’t know if it scared him, helped us or hurt us, but we dated for five years, and then he proposed.”

The couple were later married at the Lindsey Resort in Heber Springs on the Little Red River. They will celebrate six years of marriage this May and have a 10-month-old son, Mason.

“Initially, I thought she was, and still is, the most beautiful woman on the planet,” William said. “Once we started dating, her charisma and fun-loving personality won me over for good.”

Ashley and William are members of New Life Church in Bryant and lead a life group that focuses on “bringing Jesus into the center of your life.” The group, which starts today, will meet biweekly to discuss all aspects of life and how to keep Jesus the focus.

“When you get out of college, start working and get married, you have a tendency to get isolated, and I think this fills a need for people who live in a community with each other,” William said.

“I think we have a tendency to look at church, God and worship as something we do on Sundays, and then we go on with our life, and that’s not how it works. We need to keep God in the middle of our friendships, marriage, career and finances,” he said.

“We wanted to do a study that is not intimidating to people, but something that anyone can benefit from,” Ashley said. “At the end of the day, the main goal of having a life group is to build friendships and have community with other people.”

The Porterfields, who live in Little Rock, have been members of NLC since 2008, when they started attending the Greater Little Rock campus in Maumelle. Tracy Shelton, one of the Life Group pastors for NLC, has known the couple for two years.

“They have a real heart for the people,” Shelton said. “They have a lot of leadership skills — we knew they would be a big asset. They are kind of like our right-hand people. They help us a lot, and they are extremely gifted, especially in their leadership abilities.

“They have a real heart for people. They love on people and help people, which is what we do in our life groups.”

Shelton said a couple of years ago, the church started a pilot program that included several couples — including the Porterfields — and the group was designed to develop leaders.

“They came out of that pilot program,” Shelton said. “Plus, they help us organize other life-group events, like our life-group launches, two or three times a year. They help my wife, Marianne, and I organize events like that.”

William, 38, is originally from Queen City, Texas, and moved to Arkansas after receiving an academic scholarship to the University of Central Arkansas in Conway. He graduated with a management information systems degree in 2003.

Ashley, 34, is originally from Muncie, Indiana. She graduated from Ball State University in 2007 with a bachelor’s degree in business administration. She moved to Arkansas after college. The two work together in the real estate business. Williams is a broker and contractor and helps people buy and sell homes, as well renovate properties. He is currently working on building a barndominium that is up the street from his home. Inside, the barndominium is half shop building and half house. Once the structure is completed, the Porterfields will move into it and sell their current house.

“Leading and being part of a life group has strengthened our own marriage by giving us an outlet to serve together,” Ashley said. “We have a common interest and goal to help other couples grow closer as we get into the word, build authentic friendships and provide support, while navigating through life’s many challenges.”

She said the couple decided to be life-group leaders for NLC after seeing the need for it.

“Saline County is saturated with young families,” Ashley said. “We saw there was a need, those who wanted to get plugged in and do life with one another, to have a sense of community with other like-minded individuals.”

Last year, Ashley said that another life group they led had read The Purpose Driven Life: What on Earth Am I Here For? by Rick Warren, but this year, the group is focusing on various topics, such as finances, marriage, parenting teens, friendship and serving.

“We are looking at all different aspects of life,” she said, “and going back to see what the word says about those.”

She said the group is not limited to members of NLC.

“We pull mostly from church, but if someone in the community is interested, they are welcome,” she said.

“We have had friends that are leading a group, and they started out with eight,” William said. “Then she invited her neighbor, someone she met at a park, and now they are up to 20 people in their group.”

William said NLC in Saline County averages about 2,000 people on Sundays. He said it is unreasonable for the pastor to reach all 2,000, and that is why the life groups are so important.

“Life groups are the heartbeat of the church,” he said.

“I would describe the Porterfields as very Christ-centered,” Shelton said. “They are very committed to following the Lord, and they are servant-oriented, and they serve a lot of ways at our church. … They are very valuable to us. We love them.”

William said one of the reasons he first started going to NLC was to be a part of the softball team. He now serves as an usher once a month, and Ashley assists with the connect cards, which is what first-time guests fill out — “anything we can use to reach people,” he said.

“NLC is very real,” Ashley said of the church. “It is real people who can come and just be themselves and be welcomed as they are.

“That was what was attractive to me.”

William said he and his wife have a successful marriage because they put God in the center of their marriage.

“We communicate with each other, and we are both very quick to forgive,” he said. “We also are convinced that we are doing the best we can in any given moment.

“That, alone, eliminates 99 percent of the annoyances that come up in the course of the day.”