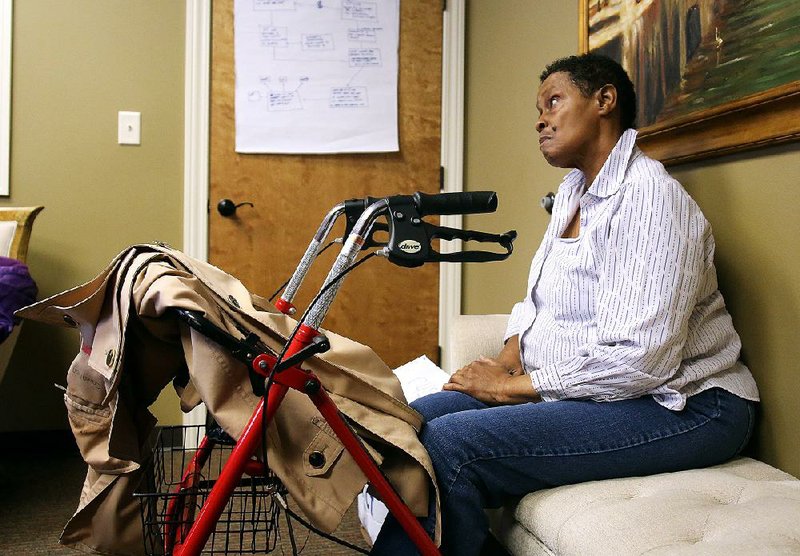 Gail Crosby sits in a waiting room Thursday at Inspiration Day Treatment Inc. in Little Rock. Since July, she has had to switch therapists four times because of issues related to billing for her care. ( Arkansas Democrat-Gazette / Thomas Metthe)

Arkansans who rely on Medicaid are struggling to get mental health care because of changes that state officials made to billing and that have forced some providers to turn away patients and offer fewer services.

The Department of Human Services is enforcing a litany of Medicaid-billing changes, causing long waits to get service, frequent changes in therapists and difficulties in scheduling appointments to get care.

“They end up falling through the cracks,” Dianne Skaggs, the executive director of the Mental Health Council, said about the mentally ill patients.

Providers said they think the changes came as part of Gov. Asa Hutchinson’s agenda to save state money through cuts to Medicaid. But officials deny that. Paula Stone, deputy director of the Division of Medical Services, said the officials are trying to save money through fewer hospitalizations and better outpatient care.

Also in July, officials began preventing providers from billing Medicaid for certain services in the same day – such as group therapy and individual therapy. Additionally, they disallowed patients who have both Medicare and Medicaid from using Medicaid as a secondary insurance.

The two programs cover different services. Medicare is a federal program, providing insurance for Americans 65 or older. Medicaid is state-run insurance backed by the federal and state governments to cover low-income Arkansans.

People who are mentally ill and on both plans are the most vulnerable members of society, Skaggs said.

Most providers said they didn’t know until August about the ban on billing for some multiple services performed in the same day and the ban on using Medicaid as secondary insurance. Birch Tree Communities Inc. didn’t find out until as late as November. The providers were delivering services that Human Services would not let them bill to Medicaid, and they had to shoulder the cost of those services.

As a result, providers have had to let some employees go to save money. Some nonprofits, such as Birch Tree, are looking at accepting fewer Medicaid patients. For all of the providers, it has meant that patients — 101,000 Arkansans — who used at least one Medicaid mental health service in the past fiscal year, have been affected.

Gail Crosby, 66, has Medicaid and Medicare, which help provide treatment of her schizoaffective disorder. The illness can cause her to hear voices and makes it difficult for her to function without treatment.

Since the Medicaid-billing changes in July, Crosby has had to switch therapists at least four times at Inspiration Day Treatment Inc. Every time she sees a new therapist, she has to build a new relationship with the person, which delays her treatment.

Sometimes the changes leave her so upset that she won’t talk to anyone, Crosby said.

“Some days I do get depressed about it and upset and cry about it, but I just have to roll with the punches,” Crosby said.

Crosby, who lives in Little Rock, has to keep switching therapists because officials at Inspiration are unable to bill for Medicaid, which means they have to bill her care to Medicare, requiring her to see either a licensed clinical social worker or a psychologist.

Both of those professions are limited in Arkansas. Skaggs gathered data that show Arkansas has 1,674 licensed clinical social workers in the state. Such workers are concentrated in urban areas. Poorer counties don’t have as many. Pike and Scott counties don’t have any.

In surrounding states, the number of licensed clinical social workers varies. Oklahoma has about 1,700, Missouri has 5,748, Louisiana has 4,039 and Mississippi has 954.

Because there are so few such workers in Arkansas, Inspiration employees have trouble aligning Medicare-certified therapists with clients on Medicare and Medicaid, said Ro Garcia, the chief operating officer. That means that multiple patients, such as Crosby, had to switch therapists to ensure that they all saw the type of professionals that would allow Inspiration to bill Medicare.

Crosby said the constant change greatly affected her life, and she believes officials don’t care about people on Medicaid and Medicare.

“It’s the way you get treated,” Crosby said. “Sometimes you feel like you’re a secondary citizen.”

The upheaval makes Crosby fear for her health. She said she hasn’t stayed in a mental hospital for three years, a big personal achievement. But with the current uncertainties, she worries that she won’t be able to keep it up.

“Because I’m scared I’m going to end up in the hospital any day,” Crosby said.

Shaunte McClain — who sits on Inspiration’s Peer Council, a group of people with mental illnesses who provide feedback on care — has heard firsthand about the effects of the changes. It’s throwing her friends’ lives into chaos, she said.

Skaggs said not allowing providers to bill Medicaid for more than one service in the same day can end up being detrimental to some patients. She used a mentally ill 6-year-old as an example.

In that case, providers would deliberately try to schedule more than one service in a day because for each appointment the child has, the parent has to take off work and the child has to miss school.

“You tell me an employer that’s going to let that parent off. Let’s say they work in some retail. They’re not going to let them off three days, three different times, every other week,” Skaggs said.

Garcia said he thinks the state is cutting Medicaid services to save money.

“Because again, who’s going to speak up for these folks?” Garcia said. “Nobody. The providers are. Well, then they’re just going to say the providers are in it for the money. Well, come look at our books. Look at the mental health centers’ books. They’re not making a ton of money. They’re struggling to get by. So why would you do that?”

All of Arkansas’ large nonprofit mental health providers have been hit hard by the changes. Collectively, the Community Mental Health Centers, which handle cases for people who are largely uninsured or have Medicaid or Medicare, have run a deficit of $5 million since the changes took place, Skaggs said.

Keathley said Birch Tree has left positions vacant that he would have filled if the organization had the money. He’s also combined a director position.

When he starts eliminating employees, it will mean that he’s had to start discharging patients, not because they’re better but because there wouldn’t be enough professionals to care for them, he said.

His organization had a deficit of $519,884 through December.

Because of the rule keeping providers from billing for some Medicaid services provided in the same day, that means that for Birch Tree, when people can’t schedule multiple appointments in one week, the company either has to pay for the services or the people just don’t get treatment.

Some providers think they’re being punished because of the kickback scandal surrounding Preferred Family Healthcare, a Missouri-based nonprofit that once was the largest recipient of state Medicaid payments for mental health care.

“Preferred Family Healthcare obviously did the wrong thing, but there’s way more providers in the state that are doing the right thing and have always done the right thing,” Garcia said.

Garcia said Inspiration would have closed if Chief Executive Officer Carol Witham hadn’t put in $325,000 of her own money since July.

“You know, we hear the governor tout how much money we have in the bank, the state,” Garcia said. “Well, OK, let’s use some of it on mental health. You know we have all this surplus that we’re so proud of. Well, some of that’s come from the mental health cuts you’ve put in place since July.”

Montana’s state government caused an uproar last summer when officials moved to drastically reduce Medicaid reimbursements for mental health care. The state eventually lessened the amount of the cuts, but some providers said the damage was done.

Snow worries that when states reduce Medicaid to save money, it makes it harder for people to access mental health care.

“And sadly we know what happens to people with mental health problems who don’t get treatment,” Snow said. “They end up in the emergency room or on the streets.”

Stone, with the Human Services Department, said there are costs associated with transitioning to any new business model, but she doesn’t view the changes as cuts to Medicaid. She said the department is offering new services, so it transitioned to new rates.

In August, Stone told the Arkansas Democrat-Gazette that she partially credited the switch to the Outpatient Behavioral Health System for reducing spending on mental health services.

In a January interview, Stone said the department did this by improving care.

“The real way to save money if you want to save money in the mental health field is access and efficiencies and coordination of services,” Stone said.

Stone heralded the move to the Outpatient Behavioral Health System. It allows providers to charge Medicaid for daily rates rather than pay by the service.

If providers use services under this daily rate category, then the Medicaid and Medicare rule changes that don’t allow providers to bill for some services provided in the same day and don’t let them use Medicaid as a secondary insurance won’t affect them, Stone said.

Skaggs said children usually require the most services in one day, and the daily rate doesn’t adequately serve them. Community Mental Health Centers were reluctant to use partial hospitalization, one of the new services, because — as in the case of Ouachita Behavioral Health & Wellness — the state department delayed the Medicaid payment for months.

Susan Smith, clinical director of Ouachita, said her center began offering the service in September but only started getting paid for it this month. She said partial hospitalization is a great tool for people who are trying to avoid a stay in a psychiatric hospital, but the system needs to work out some initial kinks. It can sometimes take as many as two weeks to get people enrolled in partial hospitalization.

The rules blocking Medicaid as a secondary insurance to Medicare and billings for certain multiple services in one day have been in place for years, said Patricia Gann, assistant director of the Human Services’ Division of Behavioral Health Services.

When the department transitioned to a more advanced billing system, that allowed it to detect the breaking of the rules, and the department quit letting providers bill for multiple services in a day or billing Medicaid as a secondary insurance.

But a spokesman for the federal Centers for Medicare and Medicaid Services said Medicaid is required to be a payer of last resort.

Skaggs said she worries that the system changes will mean patients don’t get services.

“All of these people we’re talking about, these seriously emotionally disturbed people will [eventually] be served,” Stanley said. “You will not deny them service because they will get served in hospital emergency rooms and in jails and by the police all over the state.”

When people don’t get the initial services they need, the needs only increase. More serious treatment costs more, Skaggs said.

“This is going to crumble,” Garcia said. 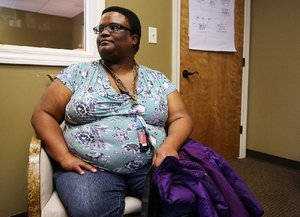 Photo by Thomas Metthe
Shaunte McClain is a member of Inspiration’s Peer Council, a group of people with mental illnesses who provide feedback on care. 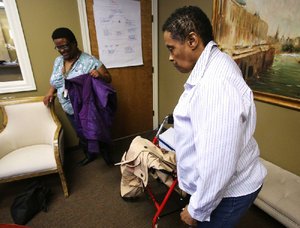 Photo by Thomas Metthe
Shaunte McClain (left) and Gail Crosby leave Inspiration Day Treatment Inc. offices Thursday in Little Rock. McClain says her friends’ lives have been thrown into chaos, and Crosby fears she may “end up in the hospital any day.”