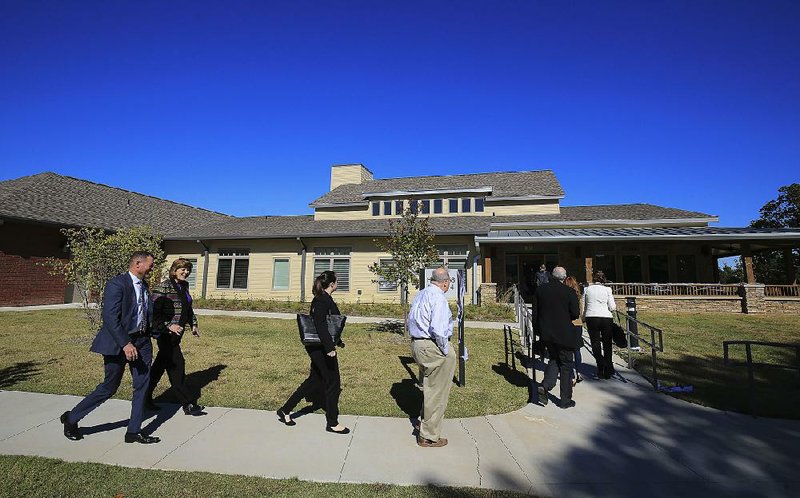 The Arkansas State Veterans Home at North Little Rock is shown in this file photo.

Regulators cited Arkansas' new state-run nursing home for veterans last month for the most severe level of violations, related to the verbal and possible physical abuse of clients at the facility.

However, the Arkansas Department of Veterans Affairs intends to appeal the findings, saying in a statement that they may have been "tainted."

Federal regulators intend to fine the facility more than $96,000 for the infractions at a time when the facility has struggled to make ends meet and hire and retain its staff.

Inspectors reported that the facility allowed a nursing assistant to continue working after the facility administrator determined that she had verbally abused a resident in September, according to a violation report, obtained through a public-records request.

The same nursing assistant was accused of physical abuse last month after a veteran was found with bruises on his face, but the facility failed to report the incident to the Office of Long Term Care as required by law, the report states.

Surveyors also faulted the facility for allowing a veteran with Alzheimer's disease to wander away from his cottage.

Facility leaders acknowledge the incident, but they plan to dispute the other findings. In a statement, the agency said it's taking the findings seriously, implementing new training and processes and adding staff to investigate the findings and monitor corrective actions.

The department has requested an "informal dispute resolution" with the Office of Long Term Care to discuss the abuse findings.

"In accordance with reporting instructions, [Arkansas State Veterans Home at North Little Rock] has asked for an Informal Dispute Resolution meeting with the Office of Long Term Care to review these findings as they have significant reason to believe the findings may have been tainted by misrepresentation of material facts and other irregularities," the statement said.

Asked to expound on the misrepresentation of facts and irregularities, a spokesman declined to elaborate because the matter is under appeal.

The Centers for Medicare and Medicaid Services reduces financial penalties by 35 percent if facilities waive their appeal rights. It's unclear if an informal dispute resolution amounts to an appeal under the center's rules, and a spokesman for the Office of Long Term Care didn't respond to a question on the matter Friday.

Additionally, the facility has uncovered 10 "events" that occurred between Dec. 21 and Jan. 1 that weren't reported to the nursing home regulators. The facility's administrator, Lindsey Clyburn, was asked to resign Dec. 31, but agency officials haven't said why.

"Within 24 hours of discovery, the appropriate notifications were made and all the incidents are under continuing investigation," the agency said in a statement. "As part of the investigation, subject matter experts from the Arkansas State Veterans Home-Fayetteville, multiple state agencies, the Arkansas Health Care Association and other consultants are assisting in accessing current practices and drafting Plans of Correction for discovered deficiencies."

Since Clyburn's ouster, the interim administrator has been Gina Chandler, who usually heads the agency's veteran service officer division.

Louthian, in an interview last week, said that several potential administrators were being interviewed Friday. He acknowledged the home's staffing struggles (10 nurses have resigned or been terminated since March), but he said they'd hired some good nurses recently that he expects to make a positive difference. The home has also recently created a new position, adding a nurse practitioner to boost patient care.

Louthian and agency officials couldn't say what the home's monthly financial deficit is because they say they don't have time, given the short staffing, to compile those reports. However, he expects to begin accepting more residents soon in hopes of beginning to break even later this year.

"The issue we've had surrounding management and workforce has kind of held us steady, and the census has been that 76-77 number for a few weeks if not a few months," Louthian said. "We've told the governor's office that we can add a couple of people a month for the rest of the fiscal year. If we can get up to [the] upper 80s, we'd be real close to breaking even."

The state-of-the-art facility was the first veterans home built from the ground up for that purpose in Arkansas. The Arkansas State Veterans Home in Fayetteville is in an old hospital.

The North Little Rock home, which opened in 2017, has a 96-resident capacity and uses a "small-home design." The facility consists of eight cottages that are designed to feel more like private homes and less like a traditional nursing home.

That approach is expensive and requires more staffing compared with institutional-style long-term care settings. The agency has also been underbudgeted, and it has requested $2.2 million in state rainy-day funds to make ends meet over the past two years.

According to the survey report, in October, several nursing assistants and nurses told investigators that a nursing assistant got into several verbal altercations with an elderly veteran on the night of Sept. 30. Everyone interviewed by state inspectors, except the accused nursing assistant, said the yelling amounted to verbal abuse.

Clyburn, who was still administrator, recommended firing the accused nursing assistant, according to the report, but that never happened. A home spokesman, citing the appeal, declined to say why Clyburn's recommendation wasn't followed.

Surveyors began investigating the same nursing assistant in January after the Office of Long Term Care received a complaint that she physically abused a resident.

The nursing assistant remains employed at the home, according to a spokesman.

The straying incident happened Jan. 8. A resident left his cottage without the knowledge of the nursing staff around 7:30 p.m. He was found roaming near the campus gate by a nursing assistant from another cottage on her dinner break, according to the report.

When she returned the veteran to his cottage, the staff was unaware he'd left. The report notes that the door alarm had been turned off.

"These findings are a salient event for the home and current leadership are taking swift action to correct practices and institute new processes to prevent future occurrences," the agency said in a statement.