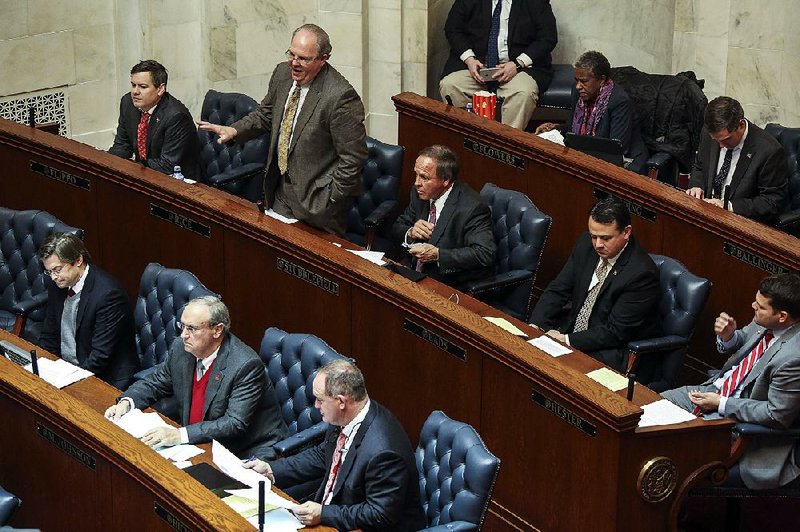 Senate leaders expect this week to begin considering the first part of the governor's state highway maintenance and construction plan.

Sen. Terry Rice, R-Waldron, on Thursday introduced Senate Bill 336, which would raise about $95 million annually for the Arkansas Department of Transportation with a new wholesale fuel tax; increased license fees on hybrid and electric cars; and an infusion of other state revenue, including casino gambling receipts.

Lawmakers also plan to continue discussions on the government reorganization bill that would reduce the number of state agencies that report to Gov. Asa Hutchinson from 42 to 15, but the sponsor of the measure said the complete bill won't be filed for several more weeks.

In addition, health committees from both chambers plan to begin considering bills that would tweak the scopes of practice for certain medical professionals.

SB336 was introduced with 21 Senate co-sponsors -- more than the 18 votes the bill needs for approval in the chamber -- but Rice and Senate President Pro Tempore Jim Hendren, R-Sulphur Springs, remain cautiously optimistic.

"I always hesitate to say something's easy," Hendren said. "There's always stuff you don't expect -- some reforms. That comes with oversight with the additional funding.

"With that many co-sponsors, it's pretty likely it moves through the Senate, but that doesn't mean that there won't be other reforms."

If approved, the highway bill would be the third major piece of the governor's legislative package to make it through the General Assembly during the current session. Hutchinson plans to sign into law this week bills that will cut Arkansas' top individual income-tax rate and raise the minimum teacher salary in Arkansas.

The tax-cut bill failed on the first Senate vote, but it passed a day later. On Thursday, the bill sailed through the 100-member House with 82 yes votes, in large part because of the highway plan, House leaders said last week.

Lawmakers have consistently said that highway maintenance is one of the chief issues they hear about from constituents and that the state couldn't afford to wait any longer for more funding.

Hutchinson included it as a pillar of his legislative package, unveiling the highway plan at a news conference last week.

The Republican governor's plan proposes raising about $414 million a year, $300 million of which would go to the state Department of Transportation. The other $114 million would go to counties and cities.

The largest chunk of money -- about $205 million -- would come from permanently extending the state's half-percent sales tax for highways. The tax was first approved by voters in 2012, but it is scheduled to sunset in 2023. Legislative leaders plan to refer a proposed constitutional amendment to voters in 2020 that would make that tax permanent.

The remaining $209 million would be raised by the mechanisms outlined in SB336.

The bill would create a new wholesale sales tax on motor fuel, increasing the tax on gas by 3 cents per gallon and diesel by 6 cents a gallon. The new tax would be indexed, meaning it would grow by no more than 0.10 of a cent a year. The tax is estimated to raise about $58 million for state highways.

The proposal also includes at least $35 million from casino tax revenue or other state funds, including a restricted reserve fund or general revenue.

The final $1.9 million would come from increasing registration fees for hybrid and electric vehicles, the governor said last week.

Hendren said he expects the Senate Revenue and Taxation Committee to consider SB336 on Wednesday with the possibility of a full Senate vote on Thursday.

Rice, the sponsor, said he'd have a better idea of the bill's schedule today.

"There's some things I want to go over before I decide," he said.

Rice said the bill and proposed amendment are investments in what constituents have been requesting for years.

"I've been on the governor for about three years to help with a highway program, and he has come through," Rice said. "I wasn't really interested in running the bill, but I'm running it. I'm always cautiously optimistic."

House Speaker Matthew Shepherd, R-El Dorado, said he'd like to see the highway plan begin making its way through the Senate this week with the momentum from passing the income-tax cuts.

"In light of this tax-cut vote, we see that there's some connection between the tax cut and the highway bill," Shepherd said. "Let's start moving [SB336] forward and hopefully we can get that passed and that will be another pretty significant issue that we will have under our belt."

Shepherd and Hendren said they both were satisfied with the pace of the session. Shepherd said he doesn't have an adjournment date in mind; Hendren said he'd like the session to adjourn before the 80-day mark, which is the first week of April.

Lawmakers still have to consider the more than 2,000-page government reorganization bill, dozens of proposed constitutional amendments, more tax changes and hundreds of other bills and resolutions that have been filed with more to come.

Rep. Andy Davis, R-Little Rock, said he hopes to file by March 8 the bill to reduce the number of Cabinet-level agencies to 15. The draft bill now is 2,200 pages, he said.

The Senate and House committees on State Agencies and Governmental Affairs have been reviewing 15 bills that would consolidate the 42 current agencies into 15. Davis plans to merge those bills into one.

The state Department of Finance and Administration estimates that the reorganization effort will save $15 million starting in fiscal 2021.

The deadline for filing constitutional amendments was Wednesday, and a variety of proposals poured in, including several tort reform measures and an amendment to dissolve the biennial fiscal sessions.

Legislative leaders said the Legislature hasn't developed a consensus on which three measures to refer to the 2020 ballot, but all expect the half-percent sales tax extension for highways to be included.

"I think many have merit, and they'll be considered," Hendren said. "Clearly, tort reform has been referred before and has been passed by the Legislature many times dating back to 2000. It's certainly one with support and in the mix."

Hendren also mentioned by name measures to allow a waiver of the state's sovereign immunity; term limits of elected officials; and tweaks to the initiated act process, but he also noted that he probably failed to mention some other proposals.

Hendren added that the ballot referrals probably won't be finalized until the end of the session.

A variety of bills have been filed limiting or expanding the scopes of practice for medical professionals such as optometrists, psychiatric technician nurses and athletic trainers.

Irvin said the bills can be time-consuming and are typically controversial. The hearings are being scheduled as special orders of business to give the public adequate notice that bills will be presented. 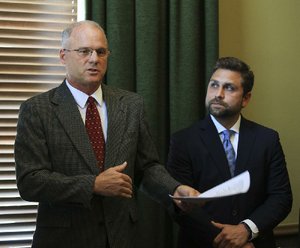 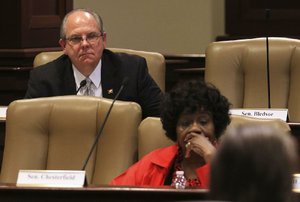 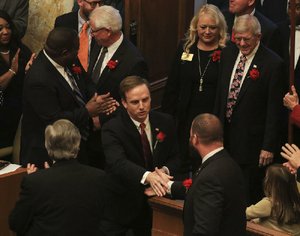 Photo by Staton Breidenthal
Speaker of the House Rep. Matthew Shepherd, R-El Dorado, greets members of the House Monday as he arrives in the House chamber to be sworn in on the first day of the legislative session.