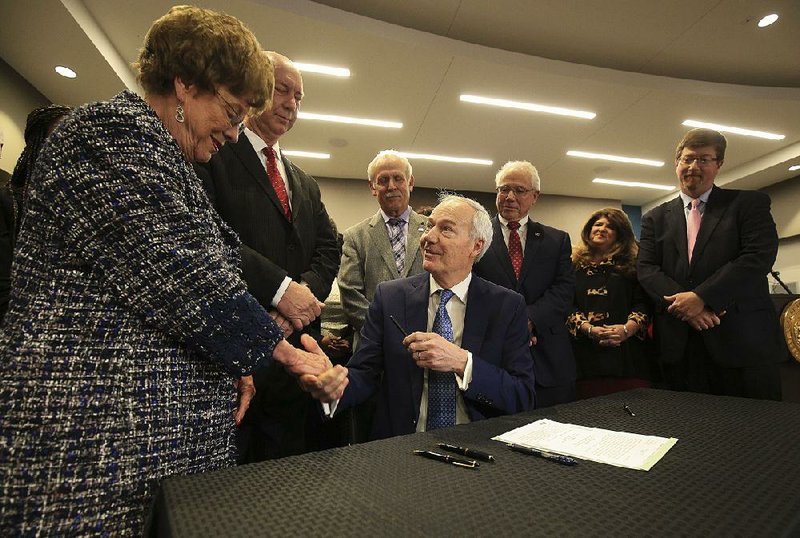 Gov. Asa Hutchinson hands a pen used to sign HB1145 into law Monday to Sen. Jane English (left), R-North Little Rock, one of the primary sponsors of the bill along with Rep. Bruce Cozart (second from left), R-Hot Springs, at the Department of Education in Little Rock. The law raises teacher salaries starting in July.

Teachers earning the minimum salary in Arkansas will receive $1,000 raises in each of the next four years after Gov. Asa Hutchinson signed the pay bumps into law Monday.

Under the legislation, a first-year teacher with a bachelor's degree must be paid a minimum of $32,800 next year and $36,000 by 2023. That same teacher now makes $31,800 a year. The increases will be reflected throughout the minimum salary schedule for teachers of all experience levels.

Boosting teacher pay was a pillar of Hutchinson's re-election campaign and his legislative agenda, and he said at the bill-signing ceremony on Monday that the new law sends a clear message.

"It reflects the priority of education here in Arkansas," the Republican governor said. "We talk about tax cuts. We talk about growth, but it is education that is the foundation. And that is our first priority."

Arkansas' bottom teacher salary ranks in the middle among states in the region, but once HB1145 is fully implemented, the state will have the highest minimum teacher salary among surrounding states unless any pass future increases.

The raises also continue a trend in the Natural State. Lawmakers have approved increases to the minimum salary in each of the past four years; those came after no increases from 2009-15.

While 168 school districts will be affected by HB1145, the remaining 67 districts already pay teachers above the minimum.

Most of the affected districts are located in rural or depressed areas, so the executive branch has identified $60 million to help those districts over the next four years.

The state Department of Education will promulgate rules to disburse those funds to school districts on an as-needed basis.

Education groups have universally praised the new law, but they've expressed some concerns -- primarily that school districts will still have to keep paying the increased salaries after that $60 million pot goes away in four years.

Those districts are also staring down ballooning costs for non-teacher employees affected by the rising minimum wage that Arkansans approved in November.

However, Hutchinson and legislative leaders have assured educators that the Legislature will ensure the raises remain adequately funded.

"It's going to be a great thing for teachers and future teachers," Cozart said. "We'll figure out what to do, and we're going to keep it funded -- completely funded."

Richard Abernathy, director of the Arkansas Association of Educational Administrators said the bill was a positive step.

"We're very proud that some of our teachers will be getting a well-deserved raise," Abernathy said. "We also appreciate the $60 million to help offset the costs."

"We appreciate Gov. Hutchinson and Rep. Cozart's leadership to prioritize teacher pay," she said. "This new law is a step in the right direction; however, it's just the first step in a much longer journey to ensure that our public schools have the resources our students deserve."

Nelson cautioned that school districts could request a waiver from the minimum salary standards. State Education Commissioner Johnny Key told lawmakers last week that it was highly unlikely that the state Board of Education would approve such a waiver.

One district -- the Helena-West Helena School District -- currently has a minimum salary waiver, according to the state Department of Education.

"For those that are entering the profession, this [is] a way that we can say we value what you do and the impact you'll have on our kids and on our future, and we want you to be compensated," he said. "That's what we are trying to communicate through this legislation."

Victoria Groves-Scott, dean of education at the University of Central Arkansas, said she hopes the new law will become a recruitment tool, saying that it could be particularly helpful in attracting students who are on the fence about their major.

"Money is always important, obviously," Groves-Scott said. "But a lot of the impact is that Arkansas is saying that teachers and education are important."