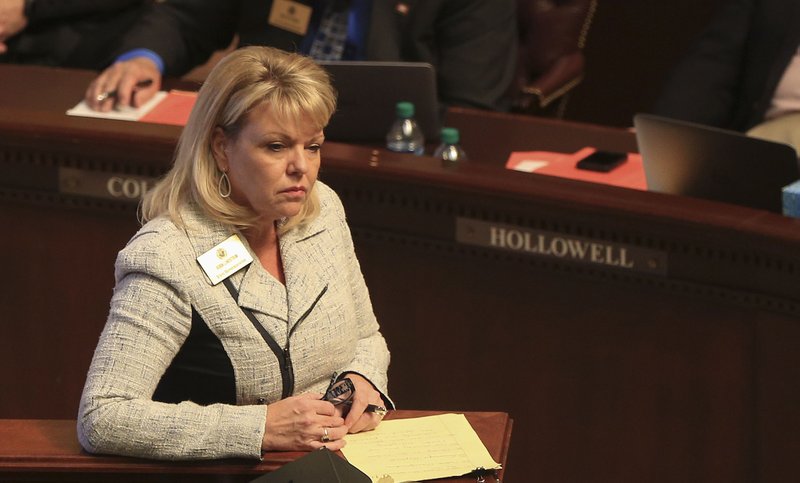 Rep. Robin Lundstrum is shown in this file photo.

A bill that would ban abortion after 18 weeks of pregnancy faced no resistance as it cleared the House Committee on Public Health, Welfare and Labor on Tuesday.

Rep. Robin Lundstrum, R-SElm Springs, the sponsor of House Bill 1439, held up a photograph of an 18-week-old fetus that appeared on the cover of Life magazine in 1965 and said the bill would make Arkansas law "catch up with science."

No one spoke against HB1439 on Tuesday. It cleared the committee in a voice vote, with no members dissenting, and now goes to the full House.

Also on Tuesday, Gov. Asa Hutchinson signed Senate Bill 149, which would ban abortion altogether, except to save the life of the mother, if the U.S. Supreme Court's 1973 decision in Roe v. Wade is overturned.

The new law was sponsored by Sen. Jason Rapert, R-Conway, and 47 House and Senate co-sponsors.

During Senate discussion of that measure, Rapert said, "It's time for the United States to redress and correct what many believe is a grave injustice and a crime against humanity which is being perpetuated by the decisions of Roe v. Wade."

North Dakota, South Dakota, Mississippi and Louisiana also have so-called trigger laws that would become effective if the landmark decision that legalized abortion nationwide is overturned.

Hutchinson spokesman J.R. Davis said the governor has not yet studied HB1439.

Arkansas in 2013 banned abortion after the 20th week of pregnancy after the Legislature overrode a veto by then-Gov. Mike Beebe, a Democrat.

That law was never challenged in court. Another 2013 measure that would have barred abortion after 12 weeks of pregnancy was struck down by a federal judge.

A federal judge has also blocked the state from enforcing a 2017 law barring a common second-trimester abortion procedure, known as dilation and evacuation. The state has appealed that ruling to the 8th U.S. Circuit Court of Appeals in St. Louis.

According to The Associated Press, Mississippi and Louisiana last year both enacted measures banning abortions at 15 weeks. Mississippi's ban has been blocked by a federal judge, and Louisiana's will only take effect if Mississippi's law is upheld, the AP reported.

Because of Arkansas' laws restricting access to abortion, such services are now limited to a total of three facilities in Fayetteville and Little Rock.