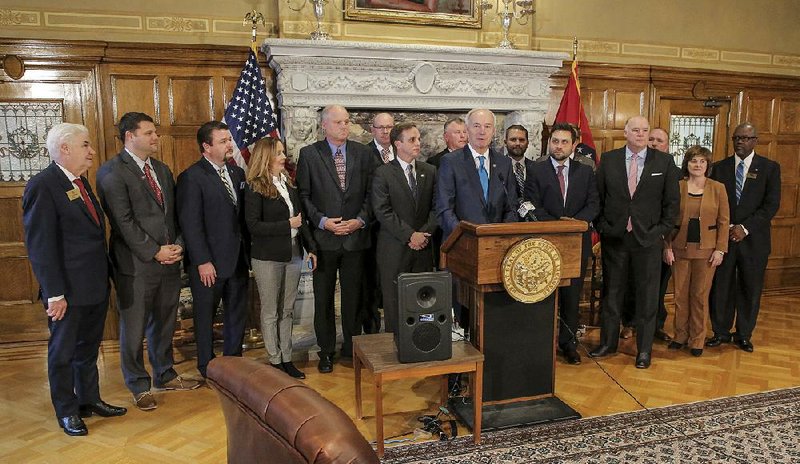 Gov. Asa Hutchinson (at lectern) stands with lawmakers Tuesday at the state Capitol after signing a bill to cut the state’s top income-tax rate.

Gov. Asa Hutchinson on Tuesday signed legislation that will enact his plan to cut the state's top individual income tax rate from 6.9 percent to 5.9 percent over a two-year period, starting Jan. 1 of next year.

State officials project that the law will reduce state revenue by about $97 million a year after it's fully implemented. It's Hutchinson's third individual income tax cut since becoming governor in 2015. The others reduced lower- and middle-income taxes.

Arkansas currently has a higher individual income tax rate than its neighbors.

Hutchinson said that whenever he can tell entrepreneurs from Washington state, Texas and other parts of the nation at a technology summit "that we just lowered our income tax rate in Arkansas to 5.9 percent, they recognize how important that is to the competitive nature of Arkansas and how this adds to our favorable climate for businesses to locate here as well as the right way to treat the citizens who live here.

"These are people that might have options down the road. They have options now. But if they sell their business, you can always relocate. We are a mobile society. This helps keep them ... capital, investment and talent here in the state of Arkansas," he said at a news conference.

Hutchinson said that a recent editorial in The Wall Street Journal about Arkansas' tax cuts has caught the attention of many business people across the nation.

He said SB211 "received incredible support in a bipartisan way from our General Assembly that allowed us to pass it with a three-fourths vote, and that is a heavy lift and it shows the strength of the support for this in the General Assembly and among Arkansans."

The legislation required a three-fourths vote for approval in the 35-member Senate and 100-member House because it increased individual income tax rates on some taxpayers, though it won't increase their overall income tax bills, according to state officials.

The bill cleared the Senate in a 28-5 vote on Feb. 6, after first falling two votes short of the 27 required for approval, and the House in a 82-14 vote on Thursday. The Senate consists of 26 Republicans and nine Democrats. The House has 76 Republicans and 24 Democrats.

"As we looked at all the different states, what you see here in Arkansas today I think will be an example to other states about how over a 6-year period, you can reduce taxes responsibly and do it in a way that does not put the budget at risk," said Senate President Pro Tempore Jim Hendren, R-Sulphur Springs. Hendren served as a co-chairman of the Arkansas Tax Reform and Relief Legislative Task Force.

Some Democratic legislators who opposed the legislation said that money spent on tax cuts should instead be spent on other needs, such as more funding for pre-kindergarten programs and reducing the waiting list for services for developmentally disabled clients.

The law also cuts the number of rates in the upper-income tax table from six to four in 2020 and then to three in 2021.

The current top rate of 6.9 percent applies to people with at least $79,300 a year in 2018 taxable income. The Department of Finance and Administration expects that figure to "move to approximately $80,500" when adjusted for inflation this fall, according to agency spokesman Scott Hardin.

In the middle-income tax table, SB211 creates a top tax rate of 5.9 percent, rather than the current 6 percent, that will apply to the portion of income that is at least $37,500.

About 579,000 taxpayers will receive a tax cut under SB211, the state Department of Finance and Administration estimated.

Arkansas has the highest top marginal individual income tax rate among surrounding states, according to the Tax Foundation. Texas and Tennessee have no income tax; Oklahoma's top rate is 5 percent; Louisiana's is 6 percent; Missouri's is 5.9 percent; and Mississippi's is 5 percent.

In 2015, the Legislature enacted Hutchinson's plan to cut individual income tax rates for people with between $21,000 and $75,000 a year in taxable income. State officials projected that cut would reduce revenue by about $100 million a year.

In 2017, the Legislature approved his plan to cut the individual income tax rates for people with up to $21,000 a year in taxable income. State officials forecast that cut would trim revenue by $50 million a year. The tax cut took effect on Jan. 1 of this year.

Asked if he is considering other tax cuts for this year's regular session, Hutchinson said the Tax Reform and Tax Relief Legislative Task Force has other recommendations.

"But the first priority that I have, the next priority, is to get our highway [funding] bill passed," he said. "I think everybody wants to make sure that passes next before we consider additional steps that might have been recommended."

Hendren said bills are being drafted to implement the task force's other recommendations, including authorizing the state to collect sales taxes on Internet sales from out-of-state sellers that don't have physical presences in the state.

"There were some corporate reforms that the task force recommended that I think are important to make Arkansas competitive at the corporate level as well as the individual level," he said. "There are a lot of reforms left to do. We'll see some tax bills coming. Some involve some further cuts on down the road, and some [offset] the Internet sales tax."

Hendren said these bills probably will be filed after the highway funding bill passes.

"These other tax cuts are important to do, but we've got to see the whole budget picture as to how quickly they can be phased in," Hutchinson said. "I am committed to looking at the Internet sales tax as part of it and combined with that some additional corporate tax restructuring that will allow us to be more competitive. These are the priorities recommended by the task force, and I share those priorities, so the question is exactly what triggers those, and that's what there will be discussions on as they draft the bill."

Asked whether the state should begin taxing vaping and e-cigarettes as a possible way to raise money for a cancer center, Hutchinson said he applauds legislative leaders and other lawmakers for working hard to support the University of Arkansas of Medical Sciences' bid to have a National Cancer Institute-designated Cancer Center at the Winthrop P. Rockefeller Cancer Institute.

The House and Senate have approved Senate Bill 151 by Sen. Missy Irvin, R-Mountain View, that would create the UAMS National Cancer Institute Designation Trust Fund, for money obtained from private grants or other sources.

"That takes a funding stream and I know that Sen. Hendren and Rep. Shepherd [are] looking for those and we'll see what that funding source will be," Hutchinson said. "But ... the vape tax, I am absolutely open to that because that's a problem for our youth. It's something that should be addressed in a regulatory fashion, and so I do support that." 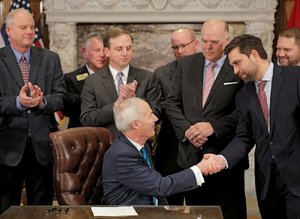 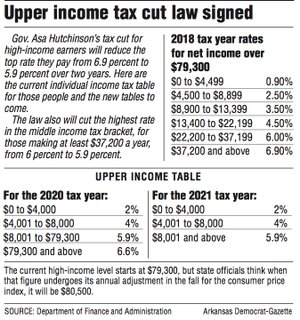