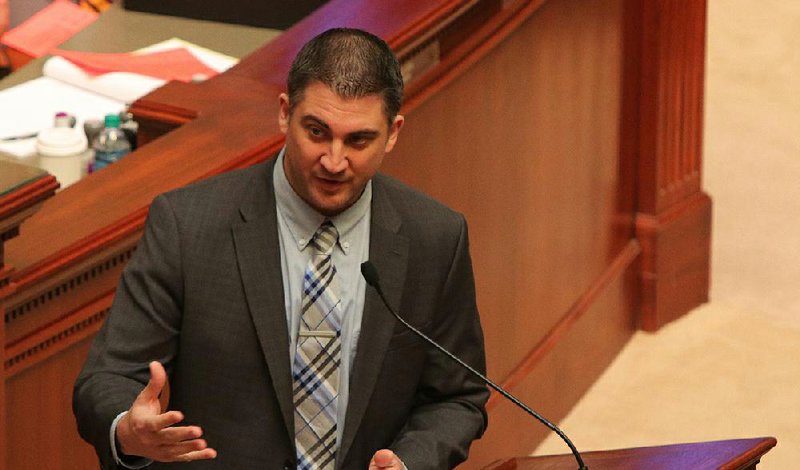 A bill aimed at greater oversight of adoptions, particularly among the Marshallese population in Northwest Arkansas, also would make it a felony to coerce an expectant mother to give up her baby for adoption.

House Bill 1488 by Rep. Clint Penzo, R-Springdale, won the support of the House Committee on Aging, Children and Youth, Legislative and Military Affairs on Wednesday morning.

The bill would create the offense of "unlawful solicitation for the relinquishment of parental rights." It would be a felony punishable by six to 30 years in prison to threaten, use physical force or otherwise coerce a parent to give an as-yet unborn child up for adoption.

The bulk of the bill would increase requirements on private attorneys who arrange adoptions. If HB1488 passes, attorneys arranging adoptions would have to report and account for expenses paid for the mother's care by the couple who seek adoption. The bill would also require the expectant mother and adoptive parents to have separate attorneys.

"There is currently an issue with kids being paid for," Penzo said. "What needs to be done is to make sure money being paid to the moms are for legitimate expenses."

Attorneys and other interested parties have asked for more precise language in the bill and raised "legitimate concerns" to address in an amendment later, Penzo said.

"The primary reason for this bill is transparency," said Josh Bryant, an attorney in Rogers who supports the measure. "As the law is now, a privately arranged adoption does not have any reporting on the arrangements made until it goes before a judge for the adoption to be approved and finalized. By that time, the money had already changed hands. The judge is left with the choice of signing the decree or not allowing the adoption."

Northwest Arkansas has the largest population of Marshallese in the United States outside of Hawaii, census figures show. Islander culture is supportive of adoptions and very adverse to abortion, advocates such as the Marshallese government's consulate in Springdale have said. The Marshallese government has supported similar measures for more oversight of Marshallese expectant mothers traveling to the U.S. to arrange adoptions for their children, mainly to ensure they know their rights and those rights are protected. For instance, a birth mother has up to 10 days after birth to decide not to go through with the adoption.

In the 2018 fiscal session of the Arkansas Legislature, the attorney general of the Republic of the Marshall Islands supported a bill by then-Rep. Jeff Williams, R-Springdale, requiring approval by the Marshallese government of any adoption of children of Marshall Islanders. The bill failed to pass.

The protections in the bill would apply to anyone expecting a child who is in Arkansas, Bryant said.

Concerns were raised at Wednesday's committee meeting, Bryant said. Lawmakers wanted clear protections for adoptive parents who are making a good-faith effort to arrange a legal adoption so they'll not be held liable if, unknown to them, someone attempts to coerce the birth mother.

Language in the bill will also be clarified to protect adoptive parents who have made legal arrangements with a surrogate mother, he said.