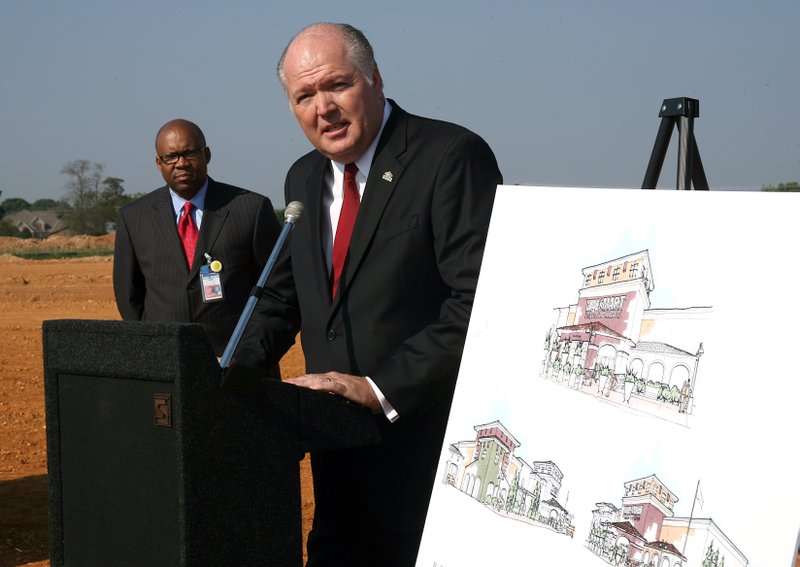 FILE — Don Frieson, senior vice President for the Central Division of Walmart (left) listens as Bill Schwyhart, partner in Pinnacle Investments, addresses an audience at the groundbreaking ceremony for the Walmart Neighborhood Market on Pinnacle Parkway in Rogers in this 2008 file photo.

The Chapter 7 trustee in the bankruptcy of Bill Schwyhart, former high-profile real estate developer in Northwest Arkansas, has notified creditors that a special counsel is investigating the Schwyharts' transactions.

In July, Schwyhart and his wife, Carolyn, filed for Chapter 7 bankruptcy protection in Texas, claiming more than $90 million in debt. The couple claim assets of a little more than $600,000, mostly in the form of individual retirement accounts, as well as vehicles, furnishings, collectibles and jewelry. They reported monthly income of $1,167 and monthly expenses of $6,475.

Earlier this month, an unsealed complaint to the discharge of the bankruptcy contends Schwyhart and his wife lied about or failed to disclose their ownership in various business entities to defraud creditors and hide information about their finances. The complaint, by creditor CHP LLC, a Northwest Arkansas-based investment group, and filed in mid-January, was initially placed under seal because it contained information gained from confidential agreements signed in 2013 between Schwyhart and others.

On Monday, Scott Seidel, the chapter 7 trustee in the Schwyhart bankruptcy, filed a single-sentence trustee's interim report that said: "The Trustee wishes to advise the Court, creditors and parties in interest that Special Counsel is investigating the debtors' transactions." Seidel was in court Wednesday and was unable to answer questions regarding the filing.

A phone message and email seeking comment on the trustee's filing sent to Texas attorney J. Seth Moore, who according to court documents represents the Schwyharts, were not returned Wednesday afternoon.

Professor Tim Tarvin of the University of Arkansas School of Law in Fayetteville, who teaches bankruptcy and nonprofit law, said there are many reasons to appoint a special council but that based on the filings so far, and the terse nature of the recent filing, it's possible the trustee has identified suspicious activities that warrant further independent investigation.

Tarvin said it's unusual to see a special counsel investigating a bankruptcy case and even more rare for that investigation to result in a criminal referral.

In 2018, there were 751,186 nonbusiness bankruptcies of all types, according to data reported by the Administrative Office of the United States Courts. In 2016, the most recent data available, there were 2,158 bankruptcy and bankruptcy-related criminal referrals, according to a report to Congress by the United States Department of Justice Executive Office for United States Trustees. The five most common allegations for criminal referrals were tax fraud, false oath or statement, concealment of assets, bankruptcy fraud scheme and identity theft.

He said if wrongdoing is uncovered, the investigation could result in a global objection to the discharge of the bankruptcy, an objection to the dischargeability of particular debts and/or a recommendation of a criminal referral by the bankruptcy court to the U.S. attorney. Tarvin said there are legal ways debtors can protect assets in a bankruptcy case so independent counsels can be used to investigate the claims and make sure they are legitimate.

"The critical question is, did they go too far?" Tarvin said.

CHP contends the Schwyharts shifted assets secured through the confidential settlement agreements through "a web" of various entities and used that money for living expenses and other spending but denied knowledge of them in their bankruptcy filing.

CHP also argued the Schwyharts deceived the court by not admitting they owned a 8,333-square-foot house in the Pinnacle Country Club development in Rogers where they lived for years until recently moving to Texas. CHP argues the couple lived in the house while claiming to be its caretaker for an unknown group while it was in fact owned by Pinnacle Villa LLC, an entity controlled by Bill Schwyhart.

According to the complaint, the Schwyharts also used funds from HGM Investments LLC to pay for their living expenses and other bills. The court documents allege HGM was infused with cash through TWG LLC, an entity controlled by Schwyhart's son Alex Schwyhart. The court documents say Bill Schwyhart said he believed his wife owned 100 percent of HGM, but when asked if the entity had a bank account, he answered "I don't know."

In the 50-page filing, CHP said the Schwyharts falsely contend the $490,000 in debt they claimed from HGM is the result of unpaid loans. CHP argues the funds were actually draws or distributions, noting that when asked if there was ever a promissory note to HGM, the Schwyharts replied they didn't know. CHP says a similar debt of $189,000 claimed as loans from Schwyhart Holdings LLC and $6,000 from Thornhart Ventures LLC were also draws or distributions.

During the Northwest Arkansas building boom, Schwyhart worked with late trucking magnate J.B. Hunt and Tim Graham on the Pinnacle Hills Promenade mall, which opened in 2006. After Hunt's death later that year, his widow, Johnelle Hunt, and Graham broke ties with Schwyhart.

Schwyhart and longtime business partner Robert Thornton formed Pinnacle Investments LLC after the split. Schwyhart was also one of the investors, along with J.B. Hunt, in the now-defunct chartered jet company Pinnacle Air LLC, which did business as Aspen JetRide, and filed for Chapter 7 bankruptcy in early 2009.

According to CHP's complaint, the confidential settlements detailed a deal with John P. Calamos of Naperville, Ill., and the chairman of financial company Calamos Asset Management. He became a partner with Schwyhart when Calamos' Ajax merged with Pinnacle Air.

According to the filing, in October 2013 Calamos entered into a confidential settlement agreement that transferred $9.7 million to Schwyhart and some business entities. A second confidential agreement entered into the very same day transferred $3 million to Hunt and Graham, and the rest went into accounts designated by Recipio Investments Strategic Fund I LLC. The agreement also noted Low Tide would convey the quitclaim deed conveying the property at 9 Clubhouse Drive to Recipio or its assignee. The filing argues Recipio, formed in Delaware in August 2011, was set up to funnel money back to Schwyhart.

"The Defendants' claims are just not credible," the filing reads. "The Defendants have failed to explain satisfactorily how they can be the plaintiffs in a lawsuit that results in a $9.75 million settlement payment and receive nothing."

CHP also contends the Schwyharts falsely list debts of $1 million to Big Horn Lodge Financing LLC and $10.7 million to J.B. Hunt LLC when all those claims were transferred to Recipio or an assignee under the 2013 confidentiality agreement. The debt of $4.5 million owed to Low Tide Holdings LLC is also false, CHP argues, because it was released as part of the confidential settlement. The Schwyharts also claim $11.3 million in debt to Calamos, but CHP says that debt was transferred to Recipio as part of the 2013 settlement with Calamos.

Some of the other primary claims against Schwyhart as part of his recent personal bankruptcy include Bank of America with $18 million; Springfield, Mo.-based Great Southern Bank with $14 million; and Pine Bluff-based Metropolitan National Bank with $5.1 million.