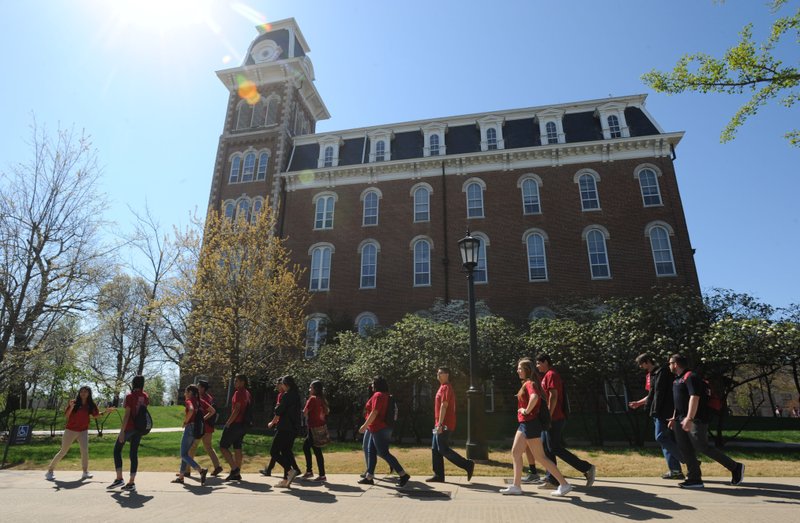 FAYETTEVILLE -- The University of Arkansas, Fayetteville contributed about $2.26 billion to the state's economy last year, according to a report from the university's Center for Business and Economic Research.

The $2.26 billion includes $714.4 million tied to one-time construction impacts, while about $1.55 billion is considered a recurring annual economic impact, the report states.

The report, released on Wednesday, comes during a legislative session as lawmakers decide how much funding to give various public entities. UA officials, joined by regional or state economic leaders, discussed the report at news conferences in Little Rock and Fayetteville.

The analysis factored in spending by students and visitors, in addition to direct and related effects of university spending.

"I think this is wonderful news, not just for the university, but also for the state that the university serves," Chancellor Joe Steinmetz said at the Arkansas Research and Technology Park.

In response to a question, Steinmetz said the report makes a case for UA to receive an increase in state appropriations.

For the 12-month period included in the study, fiscal 2018, the university received $166.8 million in state appropriations, according to the report, with that number including money for the Fayetteville campus, the Arkansas Agricultural Experimental Station and the Arkansas Archeological Survey.

The report stated that state appropriations were "leveraged 13.56 times."

"Put another way, each dollar appropriated by the state of Arkansas to the University generated an economic impact of $13.56," the report stated.

But an economist not associated with the study said in a phone interview the statement is "very misleading."

Saying a dollar in state funding yields more than $13 in economic impact "gives the credit for all of the somewhat inflated economic impact of the university to the state appropriations, which are a small fraction of the total revenues of the university," said Peter McHenry, an associate professor of economics and public policy at the College of William & Mary.

"I think our point here is that if you just express it in what the state provides in their support to us, this is how that would translate, and I think the other message is, if you gave us more, this [economic impact] number would get bigger," Steinmetz said, calling state appropriations "a major source of our funding."

The report released Wednesday listed in-state spending in fiscal year 2018 by the university of about $948.1 million, approximately 70.4 percent of the university's total spending.

The $948.1 million subtotal included $419.3 million in payroll, as listed in the report's section on direct in-state spending. Elsewhere in the report, a payroll of $388.6 million was listed for 4,841 faculty and staff "directly" employed by UA.

The direct in-state spending included $432.8 million in contract construction. The report stated that out of $497.1 million spent on facilities, 91.2 percent of the spending remained in Arkansas.

Mervin Jebaraj, director of the Center for Business and Economic Research, said indirect effects relate to hiring done by firms doing work for the university, while induced effects involve spending done in the community by workers.

The report described the university's business expenditures as having "directly supported 11,084 jobs in Arkansas and a total of 13,703 jobs through indirect and induced effects."

The report listed about $453.5 million in economic impact tied to student spending.

Out of the total $2.26 billion in statewide economic impact, $1.44 billion was said to contribute to Northwest Arkansas, the report stated. The report listed the construction impact as mostly going to the state outside of Northwest Arkansas.

Looking at the approximately $1.55 billion in recurring annual impact, about $1.37 billion was listed as contributing to the Northwest Arkansas economy.

Previously, the center examined UA's economic impacts for 2009 and 2014. In 2014, UA contributed $1.2 billion to the state's economy, including $975.6 million in recurring annual impact and the rest related to one-time construction, the center had concluded.

"A lot of universities have studies that are much like this. They follow methods that are very similar to this study's methods," said McHenry, who has researched such studies. He said estimates for visitor spending can be inflated because travel to a region can happen for varied reasons, not just because of a university's presence.

Dave Swenson, an Iowa State University economist, said in an email that "it looks to me that they took great care to measure the university's statewide and regional contributions properly."

Swenson has contributed to guidelines published by the Association of Public and Land-grant Universities for assessing economic impacts of universities. He said it seemed the report's "core indicators were done well with mostly defensible methods."

But the claim that "the university returns $13+ for every dollar of state spending is a bizarre assertion," he said.

He added: "I have advised universities to never use these phony and easily ridiculed indicators, but they seem to be addicted to them."

The complete report is available at: https://bit.ly/2GStAVf.