Fighting With My Family 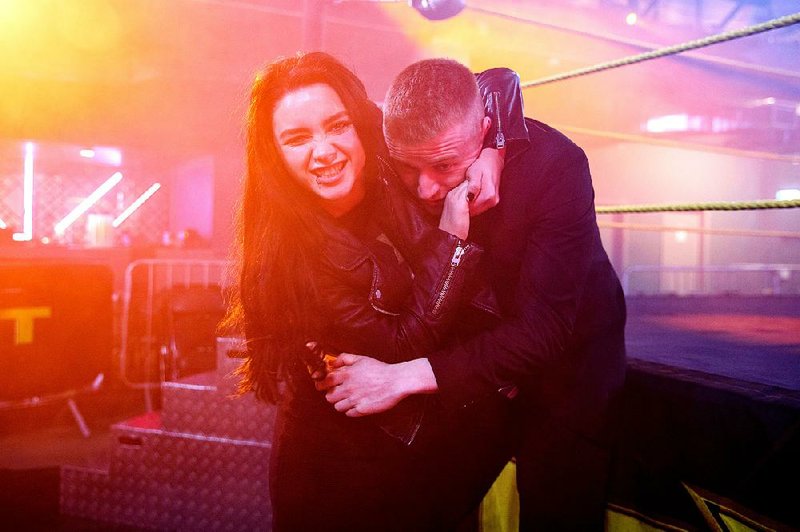 Florence Pugh, who plays WWE wrestler Paige, and Jack Lowden, who plays her aspiring wrestler brother Zak, horse around on the set of Stephen Merchant’s Fighting With My Family.

Wrestling fans -- and by "wrestling," I refer not to the Olympic sport, but the knee-boot-and-atomic-elbow-drop exhibition -- do not very much care for the word "fake." They prefer words like "scripted," to suggest while the outcome is very much determined ahead of time, the truth, such as it is, remains in the performance.

In this way, it must be said, there's little difference between a narrative in the WWE, as in any Hollywood presentation. The fact that it uses the idea of sport -- the single most spontaneous and unscripted element in pop culture, unless the fix is in -- to create its dramas is what feels an affront, but perhaps they have a point about the nature of narratives in general.

Fighting With My Family

Rating: PG-13, for crude and sexual material, language throughout, some violence and drug content

In any event, Stephen Merchant's film, about the rise, fall and rebirth of the WWE wrestler Paige (played here by Florence Pugh), a young woman from a wrestling-mad family in Norwich, England, plays very much like a WWE script: Sister and brother share a wrestling dream; only the sister is picked to train with the WWE in Florida; brother turns bitter, sister struggles to fit in; everyone suffers; she returns from a trip home with renewed commitment and quickly rises to the top of the industry.

Only, the climactic match, which puts a young, terrified Paige against the then-reigning Diva champion in front of a raucous crowd on live TV, becomes deeply confusing. We know the outcome, of course, as we know the outcome of most any sports-related film that sets up a championship match (one reason why films that buck that trend -- think The Bad News Bears, Slap Shot, and Rocky, all made in the '70s, at a time in this country where realness was discovered to have more bite than Hollywood hokum -- remain so revered today), so what's the difference? I guess in the subsequent Rocky films, as with, say, the lovably scrappy kids from Hickory High, the idea is even if we know the outcome, the characters themselves do not, a key distinction.

Here, Paige knew in advance that she would win the bout, even if she played it otherwise, which makes us rooting for her feel more than a little hollow. It also doesn't help that the film reads much of the time as yet another piece of WWE propaganda. It was produced by none other than Dwayne Johnson, the former WWE superstar turned action hero, who does a quick couple of turns as a very likable version of himself to spur the protagonist (seriously, all we're missing is Alice doing a double take and saying "You're ... the ... Rock!" for his cameo), and the film takes every opportunity to hype the organization as the gleaming star every would-be wrestler hopes to ride all the way to the top.

All of which seems a strange fit with the here-to-now unconventional Merchant, long the writing partner of Ricky Gervais, and co-creator of the original, British version of The Office and Extras among other things. Creating a film this pre-staged, as it were, serving dutiful dual purposes of telling Paige's story and acting as a PR bonanza for the WWE , seems a little out of his wheelhouse, and is more than a little disappointing. At scant moments, you can see a different and darker sort of film reach out a gnarled hand: Paige's trainer Hutch, an eternally harsh former WWE figure (Vince Vaughn) speaks of the lifestyle in the bleakest possible terms. (Indeed, even Paige herself was forced to retire young after a serious back injury.) Paige's brother, Zak (Jack Lowden), forced to watch his dream transformed into his sister's has few moments of self-immolation that feel less than fully staged, but for the most part, we are following the steady script of an all-too-well-known commodity. 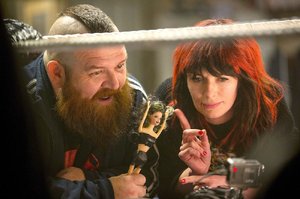 Ricky (Nick Frost) and Julia Knight (Lena Headey) head up a wrestling-obsessed family in Fighting With My Family, a comedy based on the true story of a WWE star.

Print Headline: Fighting With My Family