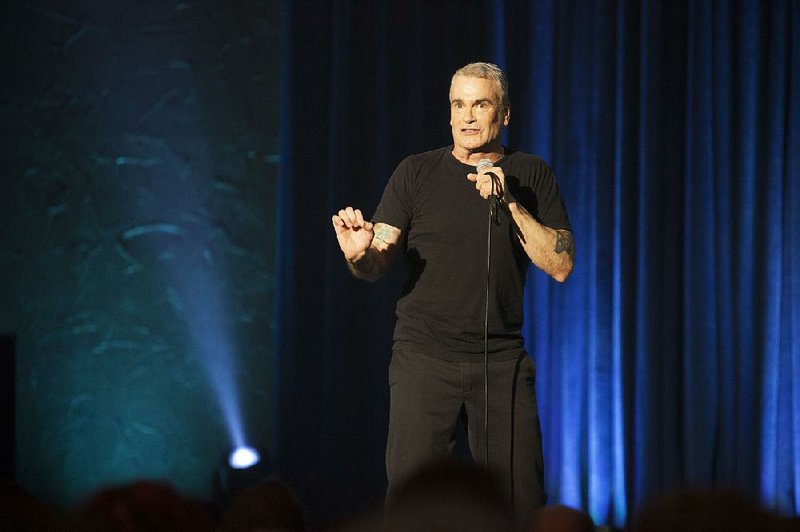 Meeting David Bowie, the cultural significance of RuPaul and what to do when someone tosses a deer head onstage.

These are just a few of the subjects tackled in Henry Rollins: Keep Talking, Pal, the Showtime stand-up special from the former punk singer released by Comedy Dynamics Network and that can be streamed at Amazon (with a Showtime trial), iTunes, Google Play, Microsoft Xbox, Vudu, Spectrum and Dish Network.

The 58-year-old Rollins has had an interesting life, which he mines for these performances.

He grew up in Washington and was part of the nascent punk rock scene there, performing in his first band, State of Alert. He joined California hardcore juggernaut Black Flag in 1981 and brought an unhinged, hard-wired ferocity to his performances on record and in concert (his vocals on the 1984 song "My War" still sound terrifying).

He formed the Rollins Band after Black Flag's breakup and was also starting to get small parts in films such as Michael Mann's Heat and David Lynch's Lost Highway, among others.

Since his Blag Flag days, Rollins, who publishes books of his poetry and essays through his 2.13.61 imprint, has performed "talking shows," where he would read from his diaries and tell stories. Nowadays, it seems he has left music behind to concentrate on other things. He has hosted an eponymous TV talk show on IFC and also hosted History Channel's 10 Things You Don't Know About.

He was a recurring character on Season Two of Sons of Anarchy and has a weekly radio show, Harmony in My Head, on KCRW in Los Angeles where he plays records from his extensive collection.

An unrepentant road dog, Rollins tours constantly, whether with his stand-up set or something different, like the slideshow from his travels he presented Oct. 7 at Rev Room in Little Rock.

"I live to be onstage," he says giddily at the beginning of Keep Talking ... and then recounts some of the weirder moments he has had in front of audiences, which is where the deer's head which showed up during a Rollins Band show in Michigan, comes in. The resulting story, about not being upstaged by an audience (or deer head) is hilariously gross.

There's also a funny bit about his election night 2016 show in Washington. He thought he'd bombed until he got offstage and learned the election results, which the audience was following on their phones during his set.

He delves into the #MeToo movement and praises the Marjory Stoneman Douglas High School students in Parkland, Fla., for their activism. He also talks about his friendship with drag queen RuPaul and a stint as a judge on RuPaul's Drag Race, a role he took, in typical fashion, way too seriously.

He is never funnier than when he is cracking on his own tough-guy image or poking fun of his age. He shares a hilarious bit about how he turns into a gushing fanboy any time he meets one of his musical heroes, like Iggy Pop or J Mascis from Dinosaur Jr.

You can still see the awe in his face when he recounts meeting David Bowie for the first time at a European music festival, one in which the Rollins Band had played a morning set to what he recalls was a mostly empty field. The story is both funny and a reminder of how powerful music can be.

"These people, their records ... they saved me," he says.

The special ends with a story from yet another show when his band opened for Ozzy Osbourne, and gives Rollins a chance to break out his dead-on impersonation of rock 'n' roll's aging Prince of Darkness (he also does a mean Iggy Pop).

The bit has everything that makes the better parts of Rollins' stand-up sets great -- self deprecation, rock 'n' roll, fandom and an insight into the stars we mythologize.