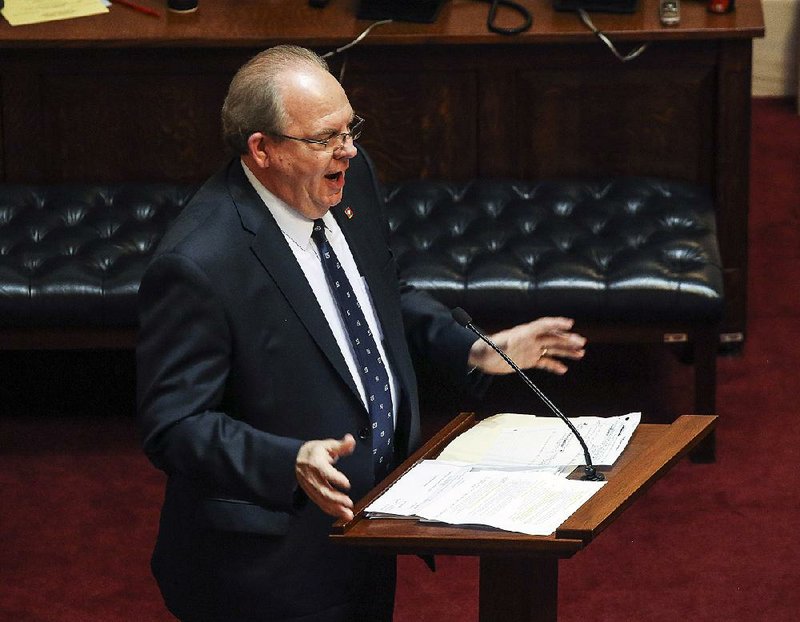 Sen. Terry Rice discusses his bill Thursday in the Senate before it was approved 27-8. Rice said he hoped the result “encourages some on the other end to step up.”

Legislation to enact Gov. Asa Hutchinson's plan to raise $95 million a year for the state Department of Transportation to spend on highways zipped through the Arkansas Senate on Thursday.

Senate Bill 336 by Sen. Terry Rice, R-Waldron, would levy a wholesale sales tax on gasoline and diesel fuel, increase registration fees on electric and hybrid vehicles, and transfer at least $35 million a year in casino revenue and other state funds to the agency.

The Senate's 27-8 vote sent the bill to the House. The legislation requires a simple majority vote in the 35-member Senate and 100-member House for approval.

"I'm pleased with the vote," Rice told reporters afterward. "It got three-fourths [vote], hope that encourages some on the other end to step up. Let's get this thing enacted."

The action came two days after the Republican governor signed Act 182 that would implement his plan to cut the state's top individual income tax rate from 6.9 percent to 5.9 percent over a two-year period. State officials project his income tax cut plan will reduce state tax revenue by $97 million a year after it's fully implemented.

SB336 is the first part of Hutchinson's two-part plan to eventually raise a total of $300 million a year more for the Department of Transportation.

The second part is for the Legislature to refer to voters a proposed constitutional amendment to make permanent the half-cent sales tax for highways that voters approved in November 2012 for a 10-year period starting in 2013.

"The Senate vote brings us one step closer to the passage of a much-needed highway plan," Hutchinson said in a written statement after the Senate approved SB336.

"The Senate passage certainly gives us momentum as the House begins consideration. I appreciate the hard work of Senator Rice and Senator [Jim] Hendren in gaining Senate support," the governor said. Hendren is the Senate president pro tempore and a Republican from Sulphur Springs.

"There is so much riding on this highway funding bill. We all depend on the maintenance of our roads for everything from families making a simple shopping trip to emergency vehicles to the big rigs that we rely on to keep our economy running," said Hutchinson, who unveiled his highway funding plan 12 days ago.

Rice's bill had 21 co-sponsors in the 35-member Senate, so there were only a few questions about it and no debate over it in the Senate on Thursday afternoon.

"We kicked the can down the road as far as we can," Rice told senators in urging them to vote for the legislation. 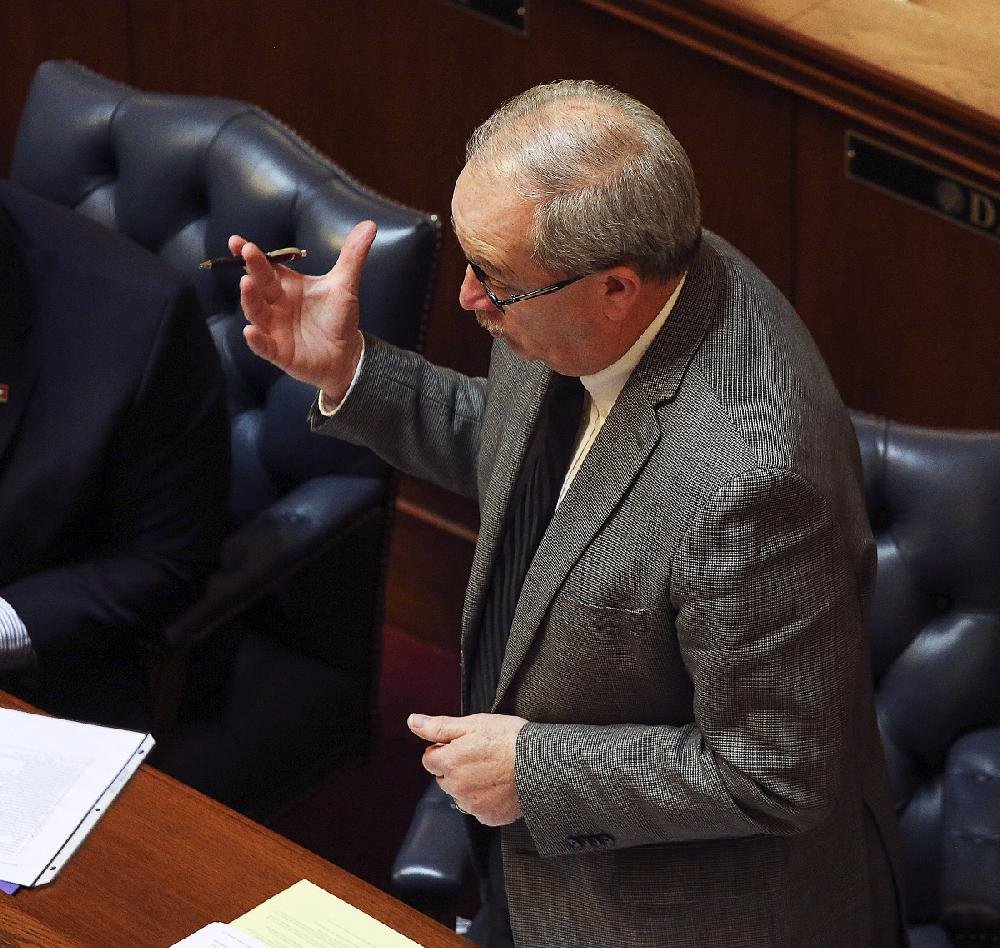 Sen. Kim Hammer, R-Benton, voiced misgivings Thursday with highway funding legislation and said he voted against Senate Bill 336 because it would raise the state gas tax.

But Sen. Kim Hammer, R-Benton, asked Rice, "Are we getting the cart before the horse?" referring to two bills proposed by Sen. Jonathan Dismang, R-Searcy, aimed at increasing the accountability of the Department of Transportation.

He said he isn't opposed to the legislation proposed by Dismang, but the measures could have been introduced earlier in this year's regular session, which started Jan. 14.

Dismang introduced his two bills Tuesday and both bills cleared the Senate Transportation, Technology and Legislative Affairs Committee on Thursday, according to the General Assembly's website.

"This is a big piece [of legislation] and we are planning to move it along," Rice said referring to his SB336.

In response to a question from Sen. Larry Teague, D-Nashville, Rice said he expects the increased highway funding provided under his bill would be distributed throughout the state.

Teague said his Senate district needs better roads and he hopes his district gets its share of the increased funds.

Afterward, Hammer said he voted against SB336 because it would increase the state's gas tax.

"I think we have two pieces of legislation coming down that indicts the Transportation Department that they need to be doing something better," he said, referring to the Dismang's two bills.

"I think the highways need to be addressed and need to be fixed, but ... maybe it needs to be a stair-stepped approach. Let's get the mechanisms in place. Let it be held accountable," Hammer said.

But Hammer said he plans to support referring a proposed constitutional amendment to voters that would make permanent the half-cent sales tax.

"I commend Sen. Dismang. I think what he is doing a great thing. It is just the tax package was already off and rolling and then the other pieces came up after the fact, so I think the timing shows that there is some problems that need to be addressed and before we give them everything, there needs to be more accountability," he said.

The Department of Transportation already is one of the most efficient highway departments in the nation and "we welcome the opportunity for what we think will be a confirmation of our efficiency," department spokesman Danny Straessle said Thursday night.

"'We already have programs in place that ensure our efficiency and some of those have been put in place by the Legislature," he said.

The department already presents its legislation to the Highway Commission, but the commission doesn't approve it, so requiring approval of legislation would make that a formal practice, said Straessle.

Across the state Capitol, in the House, House Revenue and Taxation Committee Chairman Joe Jett, R-Success, said he expects the committee to consider SB336 during its meeting Tuesday.

"The majority of the members indicated they are good with it," he said in an interview.

Rep. Mike Holcomb, R-Pine Bluff, is the House sponsor of SB336, which has 19 co-sponsors, including House Republican leader Marcus Richmond of Harvey. The House includes 76 Republicans and 24 Democrats.

House Speaker Matthew Shepherd, R-El Dorado, said in an interview that there's a good chance the legislation could get a vote on the House floor next Thursday.

He said he doesn't foresee any major issues clogging up the highway-funding proposal's passage.

"It's just like any other big bill," Shepherd said. "It's a matter of continuing to talk with members and answer questions. But I think generally, it's been well received at this point. So I'm very optimistic we'll be able to take care of both of those."

State Rep. Andy Davis, R-Little Rock, who is the House sponsor of Dismang's legislation, said he doesn't think it is going to be easy to win a majority of the votes in the 100-member House for approval of Rice's SB336.

"But I think they'll get the votes needed to pass [the bill]," he said.

But House Democratic leader Charles Blake of Little Rock said he's not sure how he's going to vote on SB336.

He said Republicans may have more problems getting representatives in their party to vote for this proposed gas tax increase and then later vote to refer the half-cent sales tax amendment to voters.