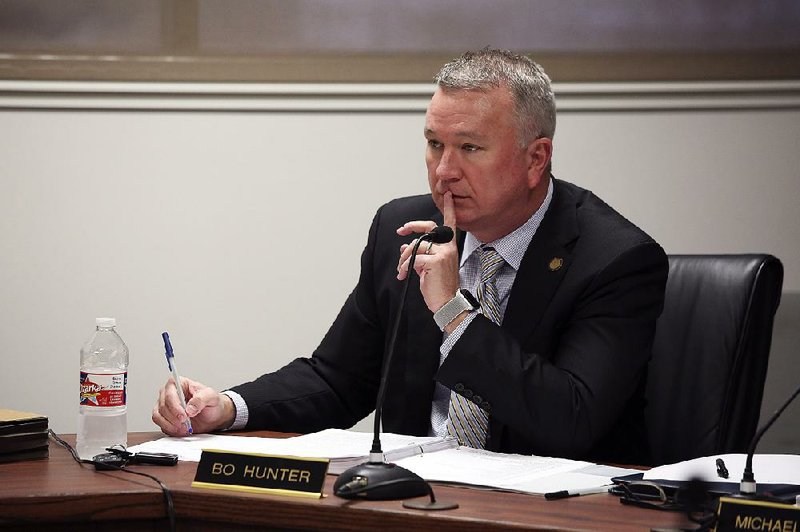 Bo Hunter, a member of the state Racing Commission, defended the rule requiring that only current officeholders could endorse casino license applications.

Amid threats of legal action and the promise of legislation to change a constitutional amendment, the Arkansas Racing Commission on Thursday unanimously adopted hundreds of pages of rules to regulate casino gambling in the state.

The 314-page draft of rules, adapted heavily from Nevada's gambling statutes and regulations, will go before a state legislative committee Monday for review.

"The Racing Commission was pleased everyone had an opportunity to speak today and valued all of the feedback," said Scott Hardin, spokesman for the state Department of Finance and Administration, which oversees the Racing Commission.

If the regulations pass legislative muster, they will immediately be filed with the secretary of state's office and become effective 10 days after the filing date. As required by Amendment 100, which authorized the state to license four casinos, the rules must be effective no later than March 14. The constitutional amendment was passed by voters in November.

The commission unanimously approved Rule 2.13, which requires endorsements dictated by Amendment 100 to come only from current officeholders at the time a casino license application is submitted.

Sports-betting regulations were passed without modifications suggested by four athletic directors from state universities or those from a report by a Drake University law professor, which was funded by casino opponents. The only caveat is that betting on amateur sporting events in the state must be done on-site at a licensed casino and cannot be conducted by telephone or the Internet.

"There is a little bit of a safety net by keeping it in-house," said Alex Lieblong, commission chairman.

The public hearing -- which filled most of the seats in the 100-person capacity conference room -- heralded the end of the public vetting process that began in January with publishing of the rules for three days and resulted in 194 written comments submitted to the commission.

Amendment 100 allows the state to have four casinos -- one each in Pope and Jefferson counties, which now have no legal gambling facilities; one at Oaklawn Racing and Gaming in Hot Springs; and one at Southland Gaming and Racing in West Memphis. The two racetracks now have electronic games of skill and have plans to expand to full casinos.

Nearly all the comments -- 95 percent, or 184 letters -- were from Pope County residents, business owners and politicians, most objecting to having any casino there.

Rule 2.13, which was edited on Jan. 10 by the commission, essentially tosses out endorsements from Pope County and Russellville officials who, just before leaving office at the end of December, submitted letters of support for a Gulfside Casino Partnership proposal to build a 600-room, $254 million hotel and casino in Russellville.

The amendment itself requires the endorsement of local officials, but does not specify when the letters must be submitted.

Gulfside's attorney, Casey Castleberry, reiterated to commissioners that a lawsuit was on the horizon if the rule was passed as it stood. The letters from the former officials satisfies the requirements of Amendment 100, Castleberry said.

"Gulfside is disappointed the Racing Commission adopted these rules, which are in direct violation of the Arkansas Constitution and send valuable gaming revenue to Oklahoma instead of funding our state's highways," Castleberry said after the meeting.

The change, Castleberry said, directly contradicts a Dec. 26 decision made by the Racing Commission to accept a Nov. 19 letter from Booker T. Clemons, then the county judge in Jefferson County, in support of a proposal from Downstream Development Authority to build a casino there.

Commissioner Bo Hunter countered that the rules were still in the development stage at that time.

"We're trying to put those rules in place and it seems to me that one of the rules would be who is eligible to submit those letters of support," Hunter said. 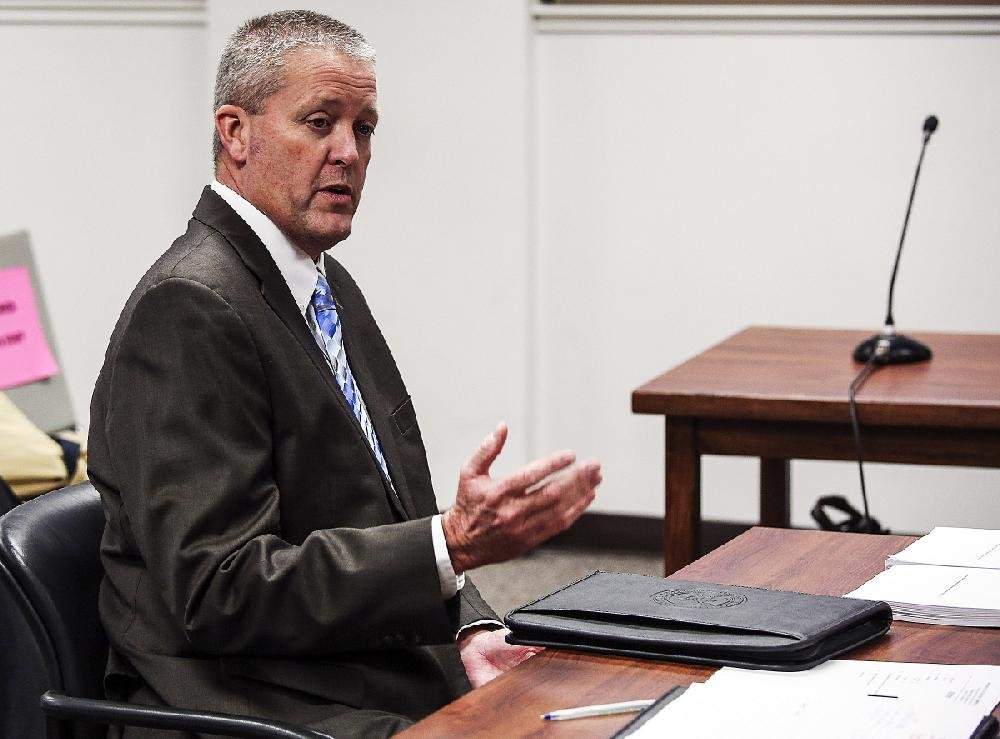 Pope County’s County Judge Ben Cross said Thursday that he supports the Racing Commission’s rule on officials’ endorsement of gambling license applications. “At the center of this issue is the local option. The local option, as described to me, is my office. And that will be upheld by the will of the people,” Cross said.

"At the center of this issue is the local option. The local option, as described to me, is my office. And that will be upheld by the will of the people," Cross said. "Wherever litigation or legislation takes this from here, we'll never know."

Harris said there was no transparency in the process used by the previous local officials for vetting Gulfside before giving their stamps of approval.

"The issue of the proposed language of the rule is important to the citizens of Russellville if we want to make sure that we've got a level playing field in whomever comes into our community to operate a casino, if that happens," Harris said. "The process that was used for vetting prior to the current administration was not open, was not forthright. It did not provide the criteria that they used or the process that was used at that time has not been communicated effectively to the citizens or to the current administration. What this language will do is allow us the opportunity to go into a public type of communication with any and all potential operators to let us select what we feel is best for our community."

Herman Houston, county judge of Johnson County, told the commission that he doesn't drink and doesn't gamble, but "I have to say with open arms we need a casino resort. We've got to have jobs."

He reminded the commissioners that the Johnson County Quorum Court passed a resolution last week in a 7-4 vote to support amending Amendment 100 to allow a casino license to be issued to Johnson County.

About 56 percent of Johnson County voters supported Amendment 100 at the polls. Pope County voters rejected the amendment and then approved a local ordinance requiring voter approval of any official endorsement.

"With all due respect, it's clear Pope County does not want this," Houston said, adding that Johnson County is "just 15 miles up the road."

"We have a great 127 acres sitting right on the interstate. It's right off the interchange," Houston said. "It's not just the casino resort coming, it's what it would bring with it -- the many opportunities for the people of Johnson County. I'm here to work for them."

Brian Eisele, chief executive officer of the Clarksville Regional Economic Development Organization, told the commission that most jobs in the River Valley area are in manufacturing. A casino would diversify the workforce there, he said, and "get us in that right direction and generate positive growth for our community."

"I'm just here to tell you Johnson County is open for business and we would make Arkansas look good if a casino license is awarded," Eisele said.

Johnson County has a population of about 26,500 with just more than 9,000 living in Clarksville. In comparison, Pope County's population is about 64,000 and Russellville is home to more than 29,000 residents.

Rep. Aaron Pilkington, a Clarksville Republican whose District 69 includes both Johnson and Pope counties, told the commissioners he will file a bill "this week" that will strike Pope County from Amendment 100 and insert Johnson County to allow a casino license to be issued there.

Michael Post on the Racing Commission questioned whether a constitutional amendment could be changed and said that he has heard conflicting views on the subject.

Pilkington replied that it could be done with a two-thirds vote of members of the General Assembly.

Case law as well as experts and another legislator have said that a constitutional amendment can only be changed by "a vote of the people."

In a Feb. 11 letter to Houston and the Johnson County Quorum Court, Sen. Ronald Caldwell, R-Wynne, said he is "deeply sympathetic to the needs of the people of Johnson County," but the Legislature is powerless to alter Amendment 100 and attempting to do so would create "an issue for the Supreme Court."

"The General Assembly does not have the power to amend the Constitution and should not seek to claw away that power from voters," Caldwell said in the letter. The Legislature can propose constitutional amendments that would be considered by voters.

The Supreme Court ruled in 1951 in the Arkansas Game and Fish Commission v. Edgmon case that a constitutional amendment can be amended or repealed only by voters at the polls.

Later in the meeting, Racing Commission member Butch Rice said he had a "different take on this."

"We have a judge here who wants the casino and we have a judge that doesn't. They're 15 miles down the road," Rice said, pausing then laughing. "That is a simple fix."

Lieblong asked again how many votes it would take to change Amendment 100 to issue a casino license in Johnson County.

Rice then turned to Castleberry and Gulfside owner Terry Green.

"And you're willing to move to that county?" Rice asked.

"With no problems?" Rice asked.

"Stop all the lawsuits?" Rice asked.

"Stop all the lawsuits," Green said.

Laughing, Lieblong said, "to get that many people to agree, that's the joy."

Racing Commission attorney Byron Freeland said a report on the comments as well as the final draft of the rules will be sent to Gov. Asa Hutchinson and the Legislature for review.