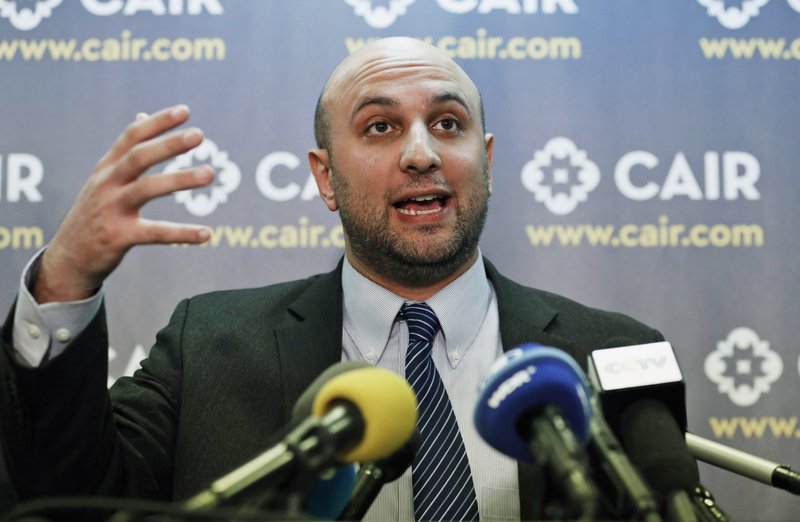 In this Jan. 30, 2017, file photo, attorney Gadeir Abbas speaks during a news conference at the Council on American-Islamic Relations (CAIR) in Washington. The federal government has acknowledged that it shares its terrorist watchlist with more than 1,400 private entities, including hospitals and universities, prompting concerns from civil libertarians that those mistakenly placed on the list could face a wide variety of hassles in their daily lives. (AP Photo/Alex Brandon, File)

ALEXANDRIA, Va. -- A federal magistrate on Friday ordered the government to disclose to him and to plaintiffs' attorneys a list of private organizations that receive access to the government's list of known or suspected terrorists.

Judge John Anderson issued the ruling at the conclusion of a hearing in U.S. District Court in Alexandria in which he angrily questioned government lawyers about their failure to previously disclose that hundreds of private entities like universities and hospitals receive access to the list.

The government admitted earlier this month in a court filing that private groups like universities and hospitals receive access to the list, after denying in previous court hearings and depositions that they do.

A government lawyer said the oversight was a mistake and there was no intention to deceive.

"We didn't catch that one," government lawyer Antonia Konkoly said of the misstatements about the list, noting that the watch list administration is "a very broad operation."

The Council on American-Islamic Relations is challenging the watch list's constitutionality. It says innocent Muslims are placed on the list by mistake and suffer numerous consequences as a result.

The government also revised its estimate of how many private groups get access to the list, from more than 1,400 to fewer than 700.

Konkoly, the government's lawyer, said the initial estimate given earlier this month of 1,441 contained numerous duplicates.

She said it's hard to determine an exact number because many of the private entities have similar names, and some of the records go back to "before the age of modern computing."

The Council on American-Islamic Relations' lawyers have long suspected that the list is disseminated much more widely than the government has acknowledged. The broad terror watch list contains hundreds of thousands of names; the much smaller no-fly list is culled from the watch list.

The lawsuit is filed on behalf of Muslim clients who say they have not only suffered travel consequences as a result of placement on the list but also difficulty in processing financial transactions and interactions with law enforcement.

At Friday's hearing, Konkoly said the private groups receiving the list are "law-enforcement adjacent" entities like police forces for private universities and railroads.

"There's nothing shocking about any of the entities on the list," Konkoly said.

As a result, Anderson ordered the government to provide him a list of the private agencies. He also ordered, over the government's objection, that the council's attorneys be permitted review the list at a secure government location. But the attorneys will not be allowed to keep a copy of the list and are barred from disseminating it publicly.

Lena Masri, an attorney for the Council on American-Islamic Relations, called Anderson's ruling "a huge step forward to help us understand the breadth of the dissemination."

That breadth of dissemination is a key aspect of the group's lawsuit, because the plaintiffs allege that the list is shared so broadly that people suffer consequences in all aspects of life.