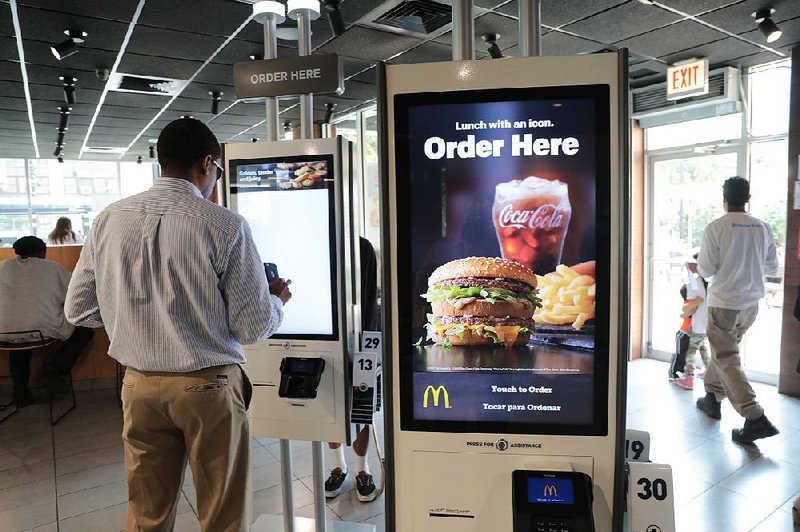 McDonald’s is rolling out ordering kiosks in many of its restaurants across the country. The company has also created the role of “guest experience leader” to help customers navigate the kiosks.

CHICAGO -- For the anti-social type, automation has made life a bit easier.

Anti-social people can grab lunch, groceries or movie tickets without interacting with cashiers; check into hotel rooms without stopping at the front desk; and retrieve the goods they ordered via touch-screen kiosk or mobile app from a locker and avoid having to thank a soul.

Consumer preference is partly behind this latest wave of mechanization, but businesses also are pressed to streamline operations in the face of a tight job market and rising labor costs.

With Illinois recently adopting a $15 minimum wage, nearly double the current rate in parts of the state, companies that have yet to automate tasks may jump on the bandwagon.

"They're chipping away at manual tasks to reduce the number of hours employees have to work," said Rob Wilson, managing director and partner in the Chicago office of L.E.K. Consulting, a strategy firm. "A lot of it is under way. ... This [the minimum wage increase] would just accelerate it."

Chicago is already on the front lines of automation in counter service. In September, Amazon opened a cashierless store in Chicago, the company's first outside its hometown of Seattle. Quick-service Asian chain Wow Bao opened a fully automated restaurant in Chicago in late 2017.

Those extreme examples are unlikely to become widespread anytime soon, but consumers will likely see more restaurants and stores invest in technology like self-checkout kiosks and electronic shelf labels that can automatically update prices, Wilson said.

Companies that have been rolling out those technologies, including McDonald's and Kroger Co., say that rather than replacing workers, the new systems free up employees to do tasks where they add more value. McDonald's, for example, has created the role of "guest experience leader" to help customers navigate the kiosks and has other employees bringing food to tables.

But Michael Jacobson, president and CEO of the Illinois Hotel and Lodging Association, worries that Illinois' $15 minimum wage might force businesses to automate when it's not in the best interest of customers or employees. And some small businesses that can't afford to invest in technological efficiencies worry they'll be at a competitive disadvantage as wages rise and they are forced to increase prices.

"We don't have the resources, the access to technology," said Arthur Potash, second-generation owner of Potash Markets, which operates three grocery stores on Chicago's Near North Side. In addition, he said, "we don't have the relationship with our customer that encourages automation. People shop with us because of the people they deal with."

Legislation to gradually increase Illinois' minimum hourly wage to $15 by 2025, up from $8.25 currently, was signed by Gov. J.B. Pritzker last week. Illinois is the fifth state in the nation to adopt a $15 minimum wage, after California, New York, Massachusetts and, most recently, New Jersey.

While Chicago already has a $12 minimum wage that rises to $13 July 1, and some Cook County suburbs are close behind, the jump will be a shock to much of the rest of the state with a lower cost of living, Jacobson said. His organization, which represents more than 410 hotel properties in Illinois, supported raising the minimum wage to $15 in Chicago but sought $13 for the six collar counties and $11 for downstate.

The increase to $15 -- with a first incremental step to $9.25 coming Jan. 1 -- will force not only higher hotel room rates in towns already struggling to maintain tourist interest, like Bloomington and Carbondale, but also greater adoption of technologies that allow management to reduce labor hours, Jacobson said.

Hotels might offer guests bonus points to use mobile check-in and digital room keys via their smartphones, he said. Already some chains offer guests similar incentives if they forgo housekeeping for a day.

Even kitschy technologies, like robots that deliver toiletries and other requests to rooms, might transition from fun toys to necessities, he said.

"The more and more that labor costs increase, you're going to see it become less trendy and more a reality," Jacobson said.

Darin Dame, general manager of the Residence Inn Springfield, expects average room rates in town to increase from $86 currently to $125 per night by the time the minimum-wage increase is fully rolled out, as hotels adjust to wage pressures not only from their own employees but also from their vendors. With both Indiana and Missouri less than two hours away, Dame worries tourists will spend the night there instead and make Springfield a day trip to see the Lincoln sights.

Greater use of mobile check-in or having robots vacuum floors may help alleviate some of the costs, but he fears the impact on an industry centered on hospitality.

"As of today in society people like that [human] interaction, and if we lose that, what is that going to do to their interest in coming to Illinois?" Dame said.

The difficulty of finding workers to perform low-wage jobs is also driving the trend, as well as the fact that consumers seem to like the convenience, he said.

Self-ordering systems improve order accuracy, retain customers' order history and allow businesses to collect data that help them target promotions and develop menus, Portalatin said. Restaurant orders placed online or on mobile devices have increased 23 percent over the past five years while consumer traffic overall has been flat, so it's a rare bright spot for growth, he said.

Machines also never forget to invite customers to add a dessert, a beverage, or another item to their order, which may be one reason people open their wallets wider when interacting with a machine. Average spending rises 20 percent, and frequency of visits rises 6 percent, when people use technology to place an order inside a quick-service restaurant, according to a study from Deloitte.

The automation Walmart Stores Inc. is introducing is intended to give customers a range of convenient ways to shop, the company says. It is testing robots that scan store shelves to check for out-of-stock items or missing price information and systems that sort new inventory so workers spend less time unloading merchandise. Some stores have vending-machinelike "pickup towers" where customers can retrieve items ordered online.

"We are playing a long game and investing in technology and associates because we need to be that retailer who customers can rely on," said Anne Hatfield, Walmart's director of state and local communications for the central U.S. "There are so many ways to invest, it's not one versus the other."

Some of those new shopping options have created new roles, like overseeing preparation of online orders customers opt to pick up at the store.

"If we can help get automation to pick up the tedious stuff, associates can focus on things that benefit customers," she said.

Chicken wing chain Wingstop is investing in self-ordering kiosks and lockers where customers pick up their orders because "they demand that of us in today's fast paced lifestyle," and streamlined workflow is a secondary benefit, spokesman Brian Bell said. Similarly, the restaurant chain replaced labor-intensive side dishes like potato salad and coleslaw with several varieties of loaded fries because of customer tastes, and a side perk is that they take less time to make, he said.

Not all automation efforts have gone smoothly. Shake Shack abandoned plans to expand cashierless and cash-free restaurants after customers at its pilot location in New York complained. The burger chain is now introducing kiosks alongside cashiers, and testing in markets with high labor costs like San Francisco.

A group of McDonald's franchisees, who operate 90 percent of its 14,000 U.S. stores, complained of cash- flow problems as the chain rolled out restaurant remodels that include self-service kiosks and systems for more delivery orders. The fast-food giant extended the remodel deadline by two years, to 2022, in response.

But Charlie Buchanan, senior manager in human capital consulting practice at Deloitte, says automation can be a win-win-win for consumers, employees and the business. A big part of success is reassigning workers to capitalize on their skill sets, and he urges clients to ask employees what they're interested in doing if mundane tasks are taken off their hands.

"What I think is exciting about this is that you're really giving people a chance to dynamically upskill their talent in a way that frees them up to do something that creates a differentiated customer experience," Buchanan said. Asked if a rising minimum wage might push more companies to automate, he said, "I hope so." 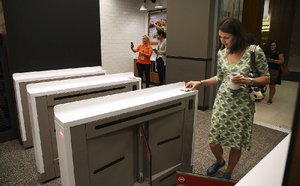 Photo by Chicago Tribune/STACEY WESCOTT
Irena Kubiliene scans her phone as she enters the new Amazon Go store on South Franklin Street in Chicago in September.