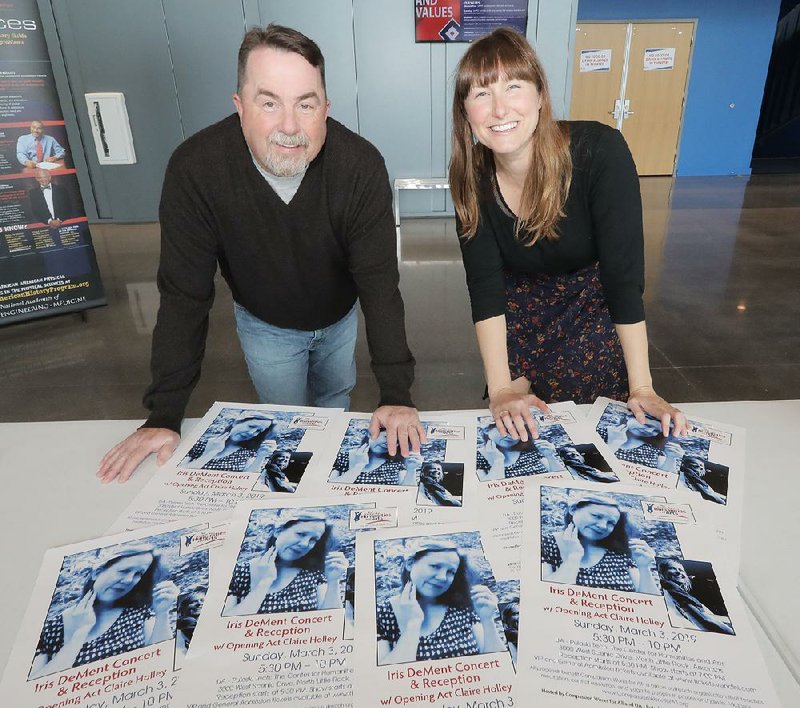 Compassion Works for All board member Dave Hoffpauir and Executive Director Morgan Leyenberger are planning an Iris DeMent concert and fundraiser for the group.

When Little Rock-based prison outreach group Compassion Works for All was planning a new fundraiser, board member Dave Hoffpauir turned to something musical.

Hoffpauir, a social worker at the Eugene J. Towbin Healthcare Center at Fort Roots and an adjunct professor of social work at the University of Arkansas Little Rock, is also a drummer in several local bands. He reached out to Arkansas-born folk singer-songwriter Iris DeMent about the idea of a show, and the result is a concert at 7 p.m. March 3 at University of Arkansas-Pulaski Technical College's Center for the Humanities and Arts.

"She is amazing," says Hoffpauir about DeMent, who was born in Paragould and lives in Iowa. The two met about 15 years ago. "There is a spiritual thing to what she's doing. She likes what we're doing, and she agreed to do it if we could find a date."

General admission tickets are $50, although a $100 ticket provides access to a VIP reception that begins at 5:30 p.m. with food prepared by students in Pulaski Tech's culinary school and special drinks. Singer Claire Holley will open the show.

It's an early afternoon on Jan. 30 and Hoffpauir and Compassion Works for All Executive Director Morgan Leyenberger are at Pulaski Tech's arts center to talk about their work with the program that teaches conflict resolution, meditation and yoga to people in Arkansas prisons and jails.

"We offer therapeutic programming to people who are incarcerated in Arkansas," Leyenberger says. The aim is to help prisoners cultivate accountability, kindness and compassion and become teachers and mentors for others in prisons and their families.

The group has about 25 volunteers, some of whom go into jails and prisons across the state to teach meditation, yoga and how to resolve conflict with compassionate communication. Volunteers also correspond with prisoners who write to Dharma Friends, the group's bi-monthly newsletter that is sent to about 4,000 subscribers in prisons and jails in all 50 states as well as Guam, Puerto Rico, Zambia, South Africa, Ethiopia and Canada.

"The reason it's important that we do the work that we do inside prisons is because those are some of the most disadvantaged people, those are some of the most marginalized populations in our country, and it's an astounding population," Leyenberger, 32, says. "Hyper-incarceration affects a lot of people. As social workers, I think it's particularly important that we identify those populations that are not getting resources and do what we can to support that and to support people's development."

There are about 18,000 people incarcerated in Arkansas, she says, and about 120 participate yearly in Compassion Works programs.

"In that number there is a lot of turnover. We have classes that are time-restricted, like the one Dave did in Pine Bluff, but we also have ongoing programs."

"The basis of acceptance commitment training is mindfulness," he says. "So we're giving them skills to meditate and be present. Can you imagine spending [24 hours a day, seven days a week] with not a lot to do? We're trying to give them some structure and some hope."

Hoffpauir has been involved with Compassion Works for All for about two years.

Leyenberger started interning in the program in 2014-2015, when she was a graduate student in social work at UALR. Their shared gateway into the group is its founder, Anna Cox.

"She's kind of legendary," Leyenberger says. "She's a psychotherapist, and is a big deal in the psychotherapy community. I had heard about her and knew that I wanted to meet her and be involved with what she was doing."

Hoffpauir had been hearing about Cox for years from his buddy, Chris Rule, who is Cox's nephew.

Cox, inspired by a talk given by the Dalai Lama, began visiting prisoners in 1993 and started publishing Dharma Friends in 1997. In 2005, Compassion Works for All was incorporated as a nonprofit.

Cox accompanied Leyenberger on her first visit to the Maximum Security Unit at Tucker.

"I knew that I was in good hands, but I was just so impressed and overwhelmed by the relationship that she had with people who are incarcerated," Leyenberger says. "We walked in and everyone was like 'Miss Anna! Hi!'"

Kaleem Nazeem was serving a life sentence for capital murder when he met Cox.

"It was about 23 years ago. Miss Anna would come over and do communication workshops at Tucker Maximum Security Unit. I got involved with that," Nazeem says from his home in Jonesboro, where he works building trailers and takes classes at Arkansas State University at Newport.

Nazeem, who was 17 when he was sentenced, was freed Aug. 10 under Act 539. The 2017 law, known as the Fair Sentencing of Minors Act, forbids sentencing minors to life without parole. It also allowed some who had received that sentence a chance to be released.

"When I first got involved, there were about eight of us, and we would sit around and talk about issues you couldn't talk about in the general population," Nazeem, 46, says. "It was a safe space to vent about issues. It was a beautiful thing, man. I had a lot of issues when I went to prison at 17 years old."

He says that what the diminutive Cox was doing took an amount of fearlessness.

"She was courageous. She was in a room with a closed door, and we would talk about these emotional issues. Sometimes things would get heated, but she kept things under control."

Participating in the group sessions helped him mature, he says, and accept responsibility for his actions. Since his release, he has become an advocate for juveniles with life and life without parole sentences.

"I feel like the best way to say I'm sorry -- and I take full accountability for my life, the good and the bad -- is through your behavior when you're in a position to do better," he says.

Nazeem is Muslim, and Cox is a Buddhist, but Compassion Works for All is nondenominational, Leyenberger says.

For Nazeem, the group was a lifeline.

"I want to commend the volunteers with Compassion Works for All," he says. "They're trying to help others become more humane behind those bars. ... People there need to hear they are loved and cared about. The institution isn't offering that kind of compassion." 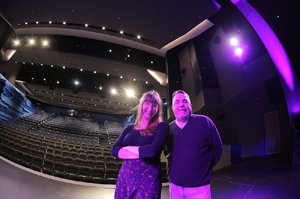 Photo by John Sykes Jr.
Morgan Leyenberger and Dave Hoffpauir work together for Compassion Works for All, a Little Rock-based group that teaches meditation, conflict resolution, and yoga to people in Arkansas prisons and jails.