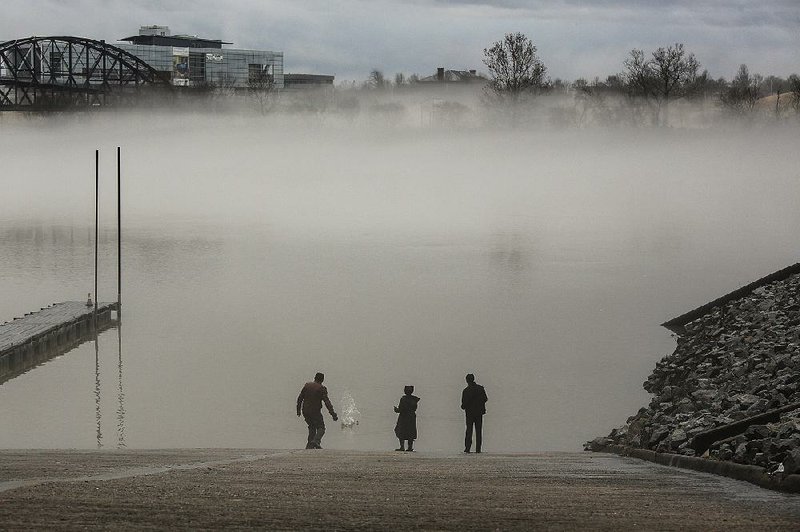 Cameron Franklin (from left) and his siblings Sydney Johnson, 10, and Zachary Johnson, 13, all of North Little Rock, skip stones from the dock at Riverfront Park as a fog rolls in Saturday in North Little Rock. During the day Saturday, parts of the state were under severe weather watches, flood warnings and watches, and fog and wind advisories. ( Mitchell PE Masilun)

Storms that roared through the state Saturday left more than 25 sections of roadway in the Delta region closed by floodwaters, according to the Arkansas Department of Transportation.

One fatality was reported in Craighead County, where a driver was swept away by high water.

Severe thunderstorm watches were issued throughout the day as storms pushed from west to east. There were reports of high winds but no tornado or wind-related damage.

The storms had abated by late Saturday afternoon, but many roads in the eastern part of the state are expected to remain closed for several days.

In eastern Arkansas, the state's agricultural center, fields on either side of state highways collected water and overflowed onto the roadways.

"The water has no place to go but up and over the riverbanks," Straessle said. "We're likely to see additional road closures due to high water as that water continues to migrate southward."

Straessle urged Arkansans to check idrivearkansas.com for an updated list of road closures, and to not drive around road barriers.

On Saturday morning, the body of Loyd Cockrell, 76, of Jonesboro was found in his vehicle in northeast Arkansas. Authorities determined that Cockrell had driven around three barricades, and his vehicle was swept away by high water.

In southern and eastern Arkansas, moderate to major flooding took place along portions of the Cache River and the lower White River, and moderate flooding was reported along much of the Black and Ouachita rivers, according to the National Weather Service in Little Rock.

From Thursday to Saturday evening, southeast Arkansas received from 1 to more than 3 inches of rain.

The rain was much heavier in neighboring states to the east, however. Northern Mississippi, northwest Alabama and central Tennessee received more than 6 inches.

The severe weather that mostly bypassed Arkansas on Saturday produced thunderstorms in Tennessee, Mississippi and Alabama throughout the day, the National Weather Service said.

"They're getting the brunt of the severe weather," weather service meteorologist Chuck Rickard said.

A tornado hit a downtown area of the eastern Mississippi city of Columbus about 5 p.m. Saturday. Details of how long it remained on the ground weren't immediately known, meteorologist Anna Wolverton with the National Weather Service in Jackson, Miss., told The Associated Press.

There were no immediate reports of any deaths or major damage, but media outlets in the areas reported some power failures.

Elsewhere around the South, homes, highways, parks and bridges have flooded or been put out of commission.

"It's been a pretty impressive storm system for February," Rickard said.

In Tennessee, a mudslide destroyed a Subway restaurant in Chattanooga. No injuries were reported.

In Bruce, Miss., rivers broke flood stage and water poured into homes and businesses. A state of emergency was declared by officials in Grenada, Miss., after dozens of streets and homes flooded.

Flooding also closed a 6-mile stretch of the Natchez Trace Parkway in Mississippi, and a flash-flood warning was issued for northwestern Lafayette County in Mississippi, where a dam was at risk of failing.

Rickard said the next few days in Arkansas are expected to be calmer, sunnier and drier, with temperatures in the 50s.

Information for this article was contributed by staff members of The Associated Press and by Josh Snyder of the Arkansas Democrat-Gazette.