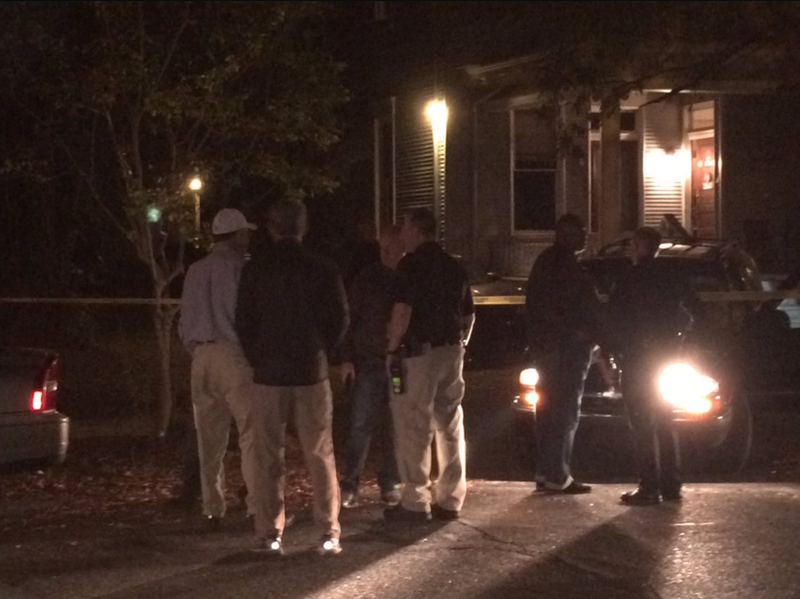 FILE — Police investigate the fatal shooting of a man by a Little Rock officer in this Oct. 25, 2016 file photo.

A federal lawsuit challenging a Little Rock police officer’s fatal shooting of Roy Lee Richards Jr. outside a house at 514 E. Eighth St. on Oct. 25, 2016, can proceed to trial against the officer, Dennis Hutchins, a federal judge said Friday.

But U.S. District Judge Leon Holmes threw out claims against the city and its former police chief, Kenton Buckner.

Richards’ sister, Vanessa Cole, filed the lawsuit Aug. 31, 2017, alleging that Hutchins used excessive force when he shot Richards, 46, shortly after midnight after responding to a report of two men fighting outside the house, which was the home of his uncle, Derrell Underwood.

The department has said Hutchins fired because, after the men separated, he saw Richards take a rifle from a vehicle parked in the driveway and head toward Underwood, the man he’d been fighting with. But Mike Laux, an attorney for Cole, has said Underwood was already inside his house when Hutchins “executed” Richards by firing a semi-automatic rifle without any warning from a distance away.

According to a 12-page order issued Friday afternoon, Holmes said the undisputed facts are that Richards was intoxicated when he arrived at his uncle’s home. He said the men had an on-again, off-again altercation and Underwood asked Richards to leave, which he did. But then Richards returned, and several neighbors “heard a commotion” in the front yard.

“Some heard yelling and saw Richards go back and forth to his truck,” Holmes said. “Underwood came in and out of his house numerous times. Underwood became angry when Richards showed him that he had a gun. Underwood called 911. … Eventually, the two men fought in the front yard. Several neighbors called 911, and several continued to watch the situation unfold.”

Hutchins, an officer of 16 years, and his partner, officer Justin Tyer, were dispatched to the disturbance. Having been informed that one of the men was intoxicated and armed with a long gun, the officers parked half a block away and approached on foot, prompting a neighbor to tell Richards and Underwood that police had arrived, according to Holmes’ synopsis.

Underwood then walked into the house and slammed the door, and according to one neighbor, Richards then backed down a few steps and turned toward his car when five shots rang out in quick succession, one of which hit Richards in the head, killing him. Holmes said that according to one neighbor’s account, Underwood had been inside his house for about five seconds when Hutchins fired the shots.

“On this version of the facts, a jury reasonably could conclude that Richards did not pose an immediate threat of physical injury or death when Hutchins began firing,” Holmes wrote.

But, he said, “Other witnesses describe the events differently.” Noting that “the testimony is in conflict on key points,” he said the matter must be resolved by a jury, which can make credibility determinations, weigh all the evidence and make legitimate inferences from all the evidence.

The law at that time allowed an officer to use deadly force “only to protect himself or another person from an imminent threat of serious physical injury or death,” Holmes said, noting that because officers knew that, Hutchins isn’t entitled to qualified immunity on Cole’s claims for wrongful death.

A city may be held liable only when one of its employees deprives a person of a constitutional right only under limited circumstances, Holmes said. He said that while Cole argues the city has a custom of tolerating police misconduct by conducting biased investigations into police-involved shootings, she doesn’t argue that the city has an official policy or custom of unconstitutional conduct.

To defeat the city’s motion for summary judgment — dismissal based on legal arguments alone — Cole must present evidence of a pattern of excessive force in police shootings to which city officials were deliberately indifferent, the judge said. He said the same conclusion applies to Cole’s claims against Buckner.