The ordinance to be considered by the City Council at its 6 p.m. meeting today would allow for a special-use permit for a bingo hall to operate at 2655 Pike Ave. inside a larger retail complex.

The site is within a Commercial 3 zone, which is for commercial businesses that aren't automobile-related. The property is nearest the corner of West 26th and Parker streets but has a Pike Avenue address by being within the center's complex in the city's Ward 3.

The proposal earned a 7-0 vote from the North Little Rock Planning Commission on Feb. 12, and there were no comments made against the special-use permit application. The applicants are Keitra Murdock and Corichia Brisco, of Highly Favored Ministries in Bryant.

"There were no issues at the Planning Commission," said Ward 3 City Council member Steve Baxter, who is the legislation's sponsor. "I haven't received any emails or anything [in opposition].

"It's just some ladies that run a ministry for previously incarcerated women, battered women," Baxter said. "What they're doing is just trying to generate another revenue stream so they can reach out and provide services for their members."

The legislation states that "all net receipts over the actual cost of conducting the game are to be used only for charitable, religious or philanthropic purposes" and cannot be used to compensate any employee or someone affiliated with the nonprofit.

The provision in the city's legislation follows state-law requirements enacted by Amendment 84 to the Arkansas Constitution, with enabling legislative statutes enacted in 2007 and 2008, Assistant City Attorney Mike Mosley said. The statutes also give oversight authority for games of bingo and raffles to the state Department of Finance and Administration, he said.

"They are required to be licensed and inspected through the DF&A," Mosley said, referring to the Finance and Administration Department. "They can get a permit here if they meet the criteria in the statute, but, at the end of the day, the overall authority is with DF&A.

"They can get a special-use permit as long as they are compliant with state law and they can get a [city] business permit," Mosley said.

The Planning Commission set rules for the bingo-hall games to only be held from noon to 5 p.m. Saturdays and 1 to 6 p.m. Sundays.

"All we're really doing is allowing them to conduct their business," Baxter said of the city's proposed action. "I'm all for helping folks out and hope this revenue stream leads to accomplishing the goals of their organization." 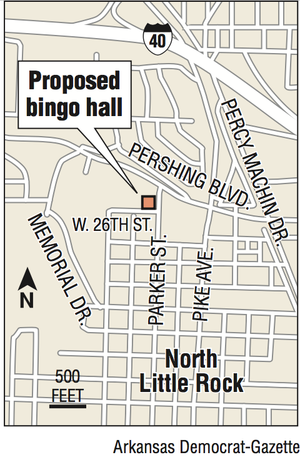