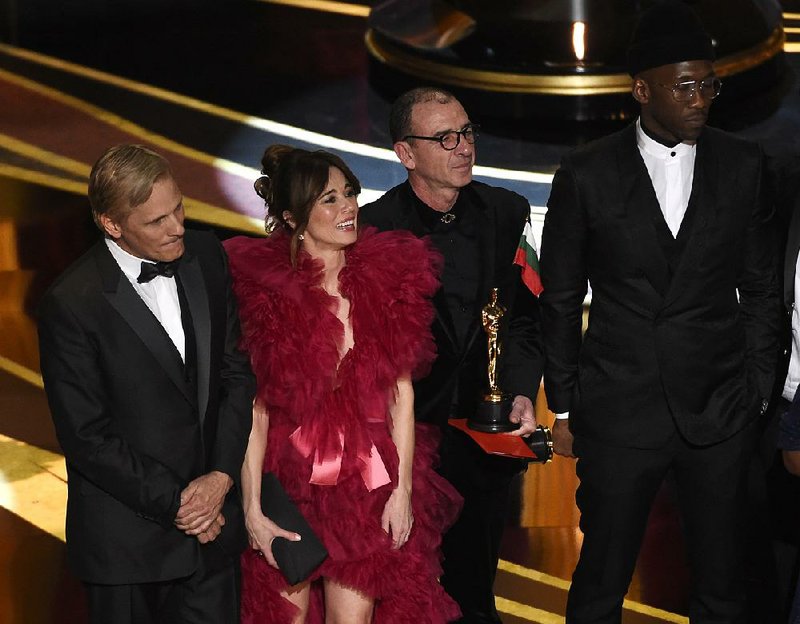 LOS ANGELES -- The segregation-era road-trip drama Green Book was crowned best picture at the Academy Awards, handing Hollywood's top award to a film seen as a feel-good throwback to some but ridiculed as an outdated inversion of Driving Miss Daisy by others.

In a year where Hollywood could have made history by bestowing the best-picture award on Netflix or Marvel for the first time, the motion picture academy instead threw its fullest support behind the interracial buddy tale that proved as popular as it was divisive. Peter Farrelly's Green Book also won best supporting actor for Mahershala Ali and best original screenplay.

Lee's win for best adapted screenplay to his white supremacist drama BlacKkKlansman gave the Dolby Theatre ceremony Sunday its signature moment. The crowd rose in a standing ovation, Lee leapt into the arms of presenter Samuel L. Jackson and even the backstage press room burst into applause.

Lee, whose film includes footage of President Donald Trump after the violent white supremacist protests in Charlottesville, Va., spoke about the upcoming election.

"The 2020 election is around the corner. Let's all mobilize. Let's be on the right side of history," said Lee, who was given an honorary Oscar in 2015. "Let's do the right thing! You knew I had to get that in there."

The biggest surprise of the night was in the best actress category. Olivia Colman won for her Queen Anne in the royal romp The Favourite, denying Glenn Close her first Oscar. Close remains the most-nominated living actor never to win, with seven nominations.

Bohemian Rhapsody, which kicked off the ABC telecast with a performance by Queen, won four awards despite pans from many critics and sexual assault allegations against its director, Bryan Singer, who was fired in mid-production. Its star, Rami Malek, won best actor for his full-bodied and prosthetic teeth-aided performance, and the film was honored for editing, sound mixing and sound editing.

"We made a film about a gay man, an immigrant who lived his life unapologetically himself," said Malek. "We're longing for stories like this. I am the son of immigrants from Egypt. I'm a first-generation American, and part of my story is being written right now."

The lush, big-budget craft of Black Panther won for Ruth Carter's costume design, Hannah Beachler and Jay Hart's production design, and Ludwig Goransson's score. Beachler had been the first black to ever be nominated in the category. Beachler and Carter became just the second and third black women to win non-acting Oscars.

Two years after winning for his role in Moonlight, Ali won again for his supporting performance in Green Book -- a role many said was really a lead. Ali is the second black actor to win two Oscars, along with Denzel Washington. Ali dedicated the award to his grandmother.

The night's co-lead nominee, Roma, won best director and best cinematography for Cuaron, whose film also notched Mexico's first foreign language film Oscar. Cuaron and his countrymen -- Alejandro Inarritu and Guillermo del Toro, who presented Cuaron with best picture -- have had a stranglehold on the category, winning five of the past six years.

Cuaron, who is the first director to ever win for serving as his own director of photography, referred to an especially international crop of nominees in one of his three acceptance speeches.

"When asked about the New Wave, Claude Chabrol said there are no waves, there is only the ocean," said Cuaron, referring to the French filmmaker. "The nominees tonight have proven that we are a part of the same ocean."

The wins for Roma gave Netflix its most significant awards yet, while Black Panther -- along with best animated film winner Spider-Man: Into the Spider Verse -- meant the first Academy Awards for Marvel.

Information for this article was contributed by Kristin M. Hall and Lindsey Bahr of The Associated Press.