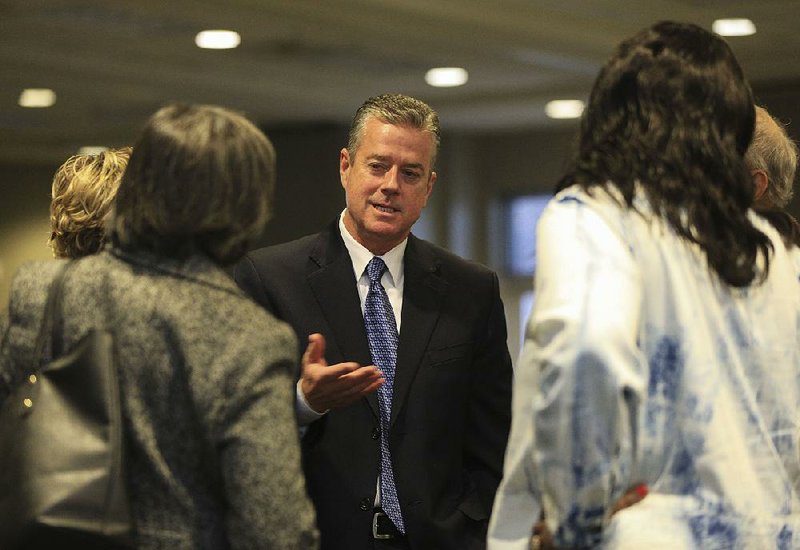 Todd Chamberlain (center), retired Los Angeles Police Department commander and one of the finalists for the Little Rock police chief vacancy, talks with city board members, including Kathy Webb (left) and Doris Wright on Monday evening before a community forum at Philander Smith College.

Todd Chamberlain, one of the final four candidates to be Little Rock's next police chief, emphasized his experience and innovation in Los Angeles and fielded questions on police misconduct, racial bias and use of force at a forum Monday night.

Chamberlain is a retired Los Angeles police commander. In a presentation to dozens of residents who gathered at Philander Smith College on Monday, he said his experience leading six commands of about 300 people each, serving more than 900,000 residents in total, would translate well to leading the Little Rock Police Department.

"I don't know all the nuances of Little Rock, but I do know law enforcement," he said. "What people want from their police department is fair, ethical, consistent policing."

He said he has a background in partnering with other agencies, including a program that taught police how to better serve the homeless, using data and technology to fight crime, and collaborating with faith leaders to proactively build community trust.

In response to questions from the audience, Chamberlain said he was generally against "no-knock warrants," though he described two scenarios he dealt with when he believed they were necessary because lives were at risk, including an individual threatening to kill a child held hostage.

"Generally, I don't think that they're needed and I think there's other alternatives," he said of no-knock warrants. "It's not something I'm going to give a rubber stamp to. I think that there's a huge potential for conflict when you're just barging into someone's home."

The forum was held days after a Little Rock police officer fatally shot a man during a traffic stop. Video of Friday's shooting has not yet been released. The investigation is ongoing.

Chamberlain said that he believed video of use-of-force incidents should be released as soon as three days after the incident, if possible. He also expressed support for body cameras on officers and a device called a "beanbag round," which allows the officer to fire a shotgun round that is generally nonlethal in order to apprehend without loss of life.

He said he did not believe officers should be required to live in the city where they serve.

When asked his view on local police complying with federal immigration authorities, Chamberlain said he had never asked someone about their citizenship status. He said he did not think cities should entirely sever their relationships with U.S. Immigration and Customs Enforcement, but he did not want people to be victimized by local police based on their immigration status.

"It comes down to if someone is breaking the law," he said.

Giving his thoughts on an independent board of citizens to review police incidents, Chamberlain said it was important to have the right people in the right places. Little Rock Mayor Frank Scott Jr. has called for such a review board to hold law enforcement accountable and responsive, as well as a police accountability task force to review how officers interact with the community.

Community members also asked Chamberlain about how he would handle misconduct of officers within the department, referencing issues that arose during his career.

Chamberlain was mentioned in a Los Angeles lawsuit that alleges he ignored racist behavior among the officers in the Los Angeles division he was captain of at the time. In 2013, a judge ordered the city to pay $1.2 million to the officer who filed the lawsuit.

On Monday, the former commander said the behavior originated from a toxic culture that had begun at the station years before he took command and that he had ordered an environmental check when he was made aware of it.

If chosen as Little Rock's chief, Chamberlain said he would set clear standards for acceptable behavior among officers and make it clear that racism is not allowed. He said he would support intensive implicit bias training.

Chamberlain retired from the Los Angeles department in 2017 and is currently an adjunct professor of criminal justice at California State University in Los Angeles.

Each of the forums will be from 6-8 p.m. and will be held in the Kendall Nugent Center at Philander Smith College in downtown Little Rock.

The search for a new chief followed the resignation in November of Kenton Buckner, who left to become the police chief in Syracuse, N.Y.