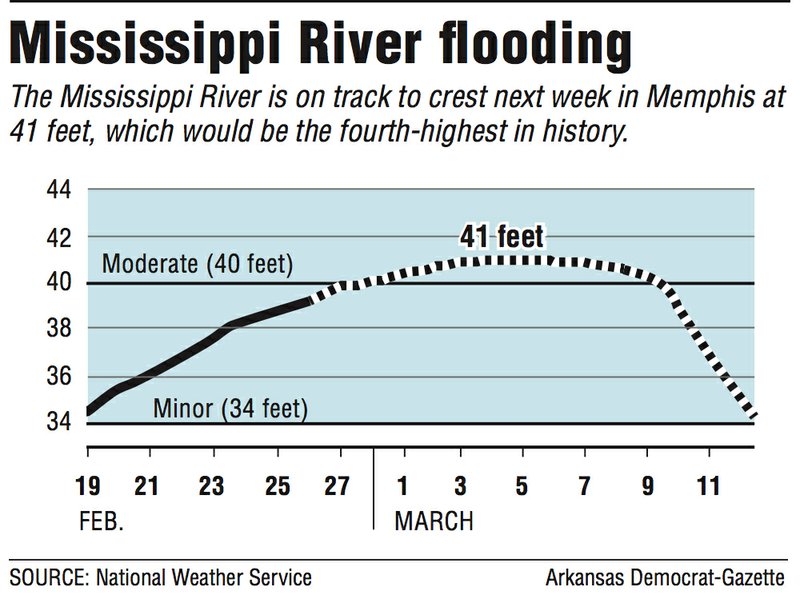 The Mississippi River is about 4 miles wide and lapping at the levee in Crittenden County, said Jim Pogue, a spokesman for the U.S. Army Corps of Engineers in Memphis.

Normally, the river is seven-tenths of a mile wide at Memphis, said Pogue, but rainfall has swollen the Mississippi to minor flood stage.

"It hasn't overtopped any levees," Pogue said. "The levee is about 3.5 to 4 miles to the west of the natural flow of the river. The river has flooded across that flood plain and is now at the base of the levee basically. The levee has stopped the western progress of the rising and widening river."

Rob Rash, CEO and chief engineer for the St. Francis Levee District of Arkansas, said the water has crept a few feet up the levees in Crittenden County, which are 25 to 30 feet high.

The Mississippi River rose Tuesday morning to 39.2 feet at Memphis, according to the National Weather Service. With more rain in the forecast this week, the river level is expected to hit 41 feet Monday at Memphis, the fourth-highest crest there in recorded history.

At that point, the water will be about halfway up the Crittenden County levees, Rash said.

"The system is designed to handle this type of flood," Rash said. "It's a lot of water. I don't want to minimize it, but we're prepared for it."

The levee district oversees 411 miles of levees on the Mississippi and St. Francis rivers, from just north of Helena-West Helena up to Missouri.

The Mississippi River has been above flood stage at Memphis since Feb. 19, according to the National Weather Service. It was expected to go into moderate flood stage (40 feet) Thursday.

Pogue said the river level would remain around 41 feet at Memphis on Monday, Tuesday and Wednesday, next week then start to go down.

The flooding has federal officials in something called "Phase II floodfight status."

"During this Phase II floodfight, 36 Memphis District employees are each day patrolling and intensively monitoring federal flood control works such as levees, floodwalls and relief wells," according to a news release from the Corps. "The district is also aiding local flood control organizations with their floodfighting efforts by providing technical advice and items like portable pumps, sandbags and plastic sheeting."

The weather service expects the Mississippi River to fall below flood stage March 12.

Bud Spears, the emergency management coordinator for Crittenden County, was taking it in stride.

"We're in good shape," he said. "We haven't had any flooding in our county at all."

Spears said 41 feet doesn't make him nervous, but the 48-foot level reached in 2011 was cause for concern.

But for now, the river's rise is routine.

"We deal with this every year," Spears said. "This didn't come as a surprise or catch anybody off guard. We're not going to expect any flooding."

Mayor Marco McClendon of West Memphis said his city is in the clear. He said the river would have to reach 60 feet to flood West Memphis.

"For West Memphis to get any Mississippi River water, it's real major," McClendon said. "It's a FEMA situation."

Pogue said the rainfall that caused the flooding was mainly in the Ohio, Cumberland and Tennessee river valleys.

Pogue said he didn't know of any flooding problems along the Mississippi River in other parts of Arkansas.

Farther downriver, the Corps announced that it would open the Bonnet Carre Spillway today to "ensure safe passage of the Mississippi River through the greater New Orleans area." The spillway is 28 miles above New Orleans.

It will be the 13th flooding of the spillway and the first time since the structure was built in 1931 that it was used two years in a row, according to The Advocate, a Baton Rouge newspaper.

Tabitha Clarke, a hydrologist with the National Weather Service in North Little Rock, said there had been no flooding on the Arkansas River because of recent rainfall.

"It's still technically flooding," she said Tuesday. "It takes a week or so for the White River to go down after heavy rains."

Clarke said parts of Arkansas had received 10 to 15 inches of rain over the previous month.

Jim Stinson III, the mayor of Clarendon, said the White River is expected to go down 2 feet over the next 10 days. He said the city has been using five pumps to remove rainwater.

Stinson has seen much worse. He said the White River crested at 37.54 feet at Clarendon in 2011.

"I'm not worried at all," Stinson said. "This was nothing. This is February. I'm worried about May."

Arkansas will get a breather, Clarke said. Over the next week, the heavy rains will be concentrated along the Gulf Coast and Southeast, she said.

After a high of around 62 degrees today in Little Rock, the high Thursday is expected to be about 50 degrees, with a low of 37 that night.

Farther to the north, freezing drizzle is in the forecast for Fayetteville tonight, and Harrison has a 30 percent chance of snow Saturday night as the temperature bottoms out at 21 degrees.