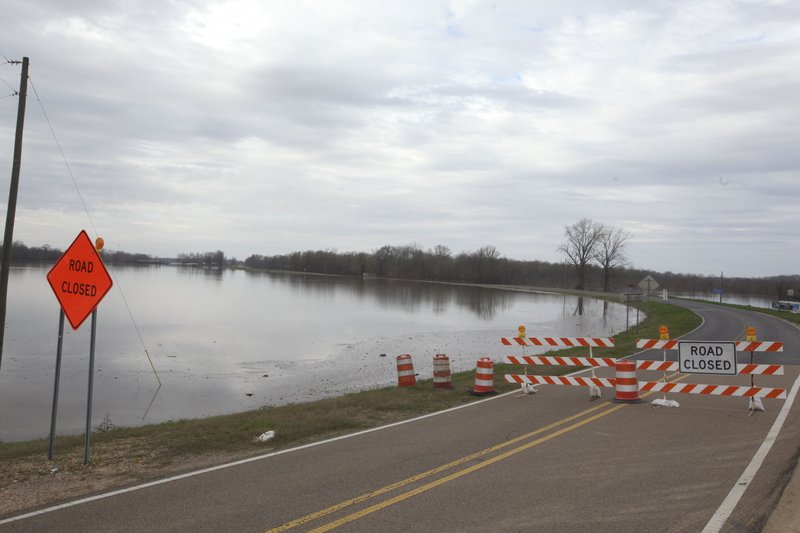 Highway 465 in Warren and Issaquena County is seen closed on the south end due to the rising flood waters north of Vicksburg, Miss., on Tuesday, Feb. 26, 2019. The Mississippi River is currently at 47.48 feet in Vicksburg according to the National Weather Service and is expected to crest at 51.4 feet on March 14, which is the highest crest since 2016 (Courtland Wells/The Vicksburg Post, via AP)

GLENDORA, Miss. — Rain-swollen rivers were spilling over their banks across the South on Wednesday and a Mississippi mayor said water has surrounded his town and forced some families to leave their homes.

Flood warnings were in place Wednesday in parts of Arkansas, Louisiana, Tennessee, Mississippi, Alabama and Georgia.

In Glendora, Mississippi, the town of 151 people was caught between the flooded Tallahatchie River to the north and the Black Bayou to the south, The Greenwood Commonwealth reported.

The water was within inches of covering U.S. 49 in both directions, Glendora Mayor Johnny Thomas said.

City workers filled sandbags Tuesday afternoon and a shelter opened for those displaced.

In Arkansas, flood warnings were in effect for parts of the Mississippi, Black, Cache, Ouachita and White rivers.

In Tennessee, where more than a foot of rain has fallen this month in Nashville, flood warnings continued for several rivers including the Tennessee River.

Nearly the entire state of Tennessee has seen 10-20 inches of rain this month, the National Weather Service said. The month is not even over, and it's already the wettest February in Nashville's history, forecasters said.

Near the Alabama-Mississippi line, the Tombigbee River crested nearly 20 feet above flood level, just short of a record, surrounding rural homes and covering fields. Flooding already was occurring downstream, and forecasters said the water would continue rising through the rest of the week.