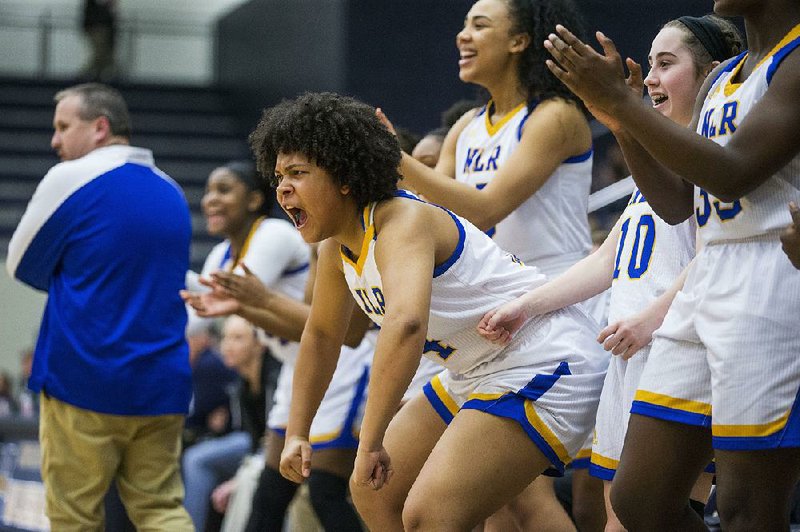 North Little Rock scored the next 13 points and eliminated the host team 69-40 on Wednesday during the Class 6A girls state tournament in Wolverine Arena.

"Our girls are playing really good right now," North Little Rock Coach Darryl Fimple said. "We knew they had two good offensive players, and we ran bodies at them the entire night.

"We shot the basketball really well. We took good shots and moved the ball around, and we were able to get our post girls involved early. Overall, for a state tournament game, it was good -- really, really good."

North Little Rock (18-9) used a one-two scoring punch of 6-4 freshman Amauri Williams and 5-10 senior Kennady Tucker, combined with sticky pressure defense, to take over the game. Both players scored seven points in the first quarter, with Williams converting a three-point play to put the Lady Charging Wildcats in front for good. Tucker scored the last five points of the first quarter for a 22-7 cushion.

"We're just figuring out that one of our advantages is having her," Fimple said of Williams. "Early on, she would disappear because we wouldn't throw it to her. We've been doing a much better job over the last month of making sure she stays involved.

"That makes her a better defensive player because she gets involved on that end. With her ability to be able to rebound, we can get out in transition better. We can extend the press a little bit and gamble a little bit. She's an advantage, and she's just 14 years old."

Anna Kash had 10 of Bentonville West's first 17 points and finished with 15 to lead the Lady Wolverines, who finish the season 10-18. Shania Wilson added 10.

Walker, a senior guard, made six three-pointers for the Lady Hornets, which dominated the second half after trailing 8-0 and 16-8.

Walker and Tierra Trotter opened the second half with three-pointers for Bryant (17-10), which outscored Van Buren (15-13) 26-11 in the third quarter to erase a 22-18 halftime deficit.

Rylee Ryan finished with 10 points to lead Van Buren, which had its five-game winning streak snapped.

Little Rock Central scored the first eight points in overtime, and the Lady Tigers completed a sweep by 6A-Central teams.

Central (12-14) held the ball for a minute before Ariyanna Hall scored inside, then Lauren Pendleton and Jordan Greenwood converted steals into layups.

The Lady Tigers led for most of the second half, but Springdale (13-13) strung together seven consecutive points and took a 31-30 lead on Marquesha Davis' bucket with 3:01 remaining. Central then used a Lillian Jackson free throw to tie the game at 31-31 with 2:43 remaining.

Pendleton finished with 11 points and was the only player in double figures for Central.

CLASS 1A AT BROCKWELL

The Lady Daredevils opened up state tournament play with a 17-point victory over the Lady Indians.

The Lady Rebels (28-11) raced out to a 42-26 lead at halftime before the Lady Hornets (27-11) started the second half with a 7-0 run to get the deficit to single digits, but Rural Special outscored Blevins 16-6 to finish the third quarter and led by as many as 29 in the fourth. 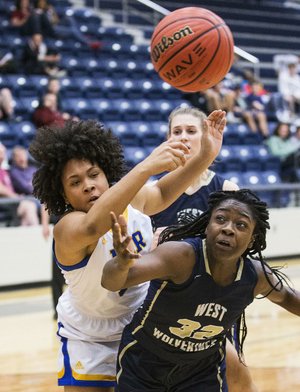 Photo by Ben Goff
North Little Rock’s Zoe Adebyo (left) and Jada Curtis (32) of Bentonville West vie for position to grab a rebound Wednesday during the Lady Charging Wildcats’ 69-40 victory over the Lady Wolverines during the first round of the Class 6A state tournament in Centerton. For more photos, visit arkansasonline.com/galleries.