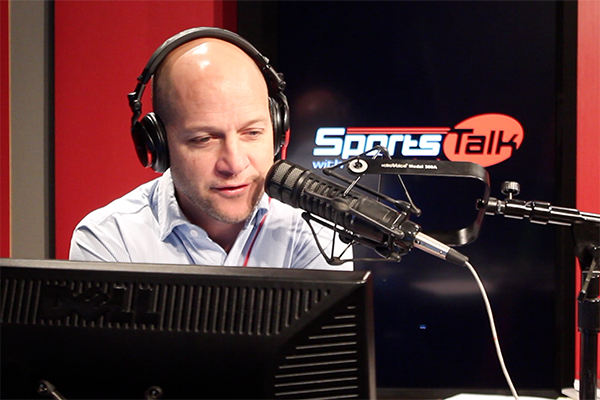 Bo Mattingly, who has hosted an afternoon sports talk radio show since July 2007, is ending his show to shift the direction of his company. ( Sawyer Radler, Sport & Story )

On Jan. 23, Bo Mattingly led off his show with a surprising announcement.

After more than a decade of hosting arguably the state's most popular sports talk radio show, Mattingly said he was giving up his coveted afternoon time slot to move his business, Sport & Story, in a new direction, toward documentary filmmaking and podcasting.

This afternoon, "Sports Talk with Bo Mattingly" will air for the final time on nine affiliates throughout Arkansas. It ends an 11 1/2-year run in which Mattingly, 42, became one of the most recognizable voices in the state - he was voted state sportscaster of the year in 2012, 2013 and 2016 - and one of the most influential on the topic of the Razorbacks. The show airs from 2 p.m. to 6 p.m.

Mattingly's show was unlike its peers in the state at the time it launched in July 2007, both in its business model and structure.

Mattingly relied 100 percent upon ground-floor advertisers to begin the show. Instead of producing the show from an existing station, Mattingly syndicated his show.

And whereas other shows were driven almost entirely by callers, "Sports Talk" took a different approach by scheduling multiple guests each day to carry the show, then supplemented the interviews with calls and features.

In the show's infancy, Mattingly told his production assistants to shoot for the moon in scheduling interviews and target A-listers from Jim Nantz to David Letterman.

Mattingly was helped by a pair of personal friendships with ESPN personalities Chris Mortensen and Jimmy Dykes, who did weekly segments on the show. He also retained in-state radio veterans Clay Henry and Dudley Dawson of Hawgs Illustrated, who had been regulars on "Sports Rap with Chuck Barrett," a statewide show that preceded "Sports Talk."

The recognizable voices added credibility to the show, and over time more nationally-known guests joined on as regular contributors.

A listener might say they didn't care for Mattingly's opinion, but they listened to his show because of his guest list.

“The vision for the show was to always be content driven and give people things they didn’t know,” Mattingly said. “Anytime I had a question, I would try to get somebody on to get an answer. Rather than just discuss it, let’s get someone on who can give an educated opinion.

“I wanted to have a thought-provoking, educated, opinion-type show where it was rooted in research or expertise.”

Prior to launching the show in 2007, Mattingly spent nearly a decade as a TV sportscaster at affiliates in Fayetteville. He was best known for his years as the sports director at KNWA-TV from 2004-07, a time in which he helped influence his bosses to rebrand the nightly sportscast away from the traditional format of showing highlights from local events like high school games, and exclusively to one that focused on the area's most popular team, the Razorbacks.

Mattingly's idea became "Razorback Nation," a sportscast each night that was aired on affiliates in Arkansas' two largest TV markets and that dove deep into the athletics department at the University of Arkansas. And during that time, there was plenty to dive into.

The appetite for all-things-Razorback led Mattingly to be on the road several nights a year. In February 2007, he returned from a basketball game in Starkville, Miss., late in the afternoon and was met at Northwest Arkansas Regional Airport by a KNWA satellite truck. He did a live shot from the airport parking lot to address speculation that athletics director Frank Broyles' retirement was imminent.

“It just got to be we were going on every road trip with the basketball team and every football road trip, so during basketball season I was gone a lot,” Mattingly said. “I had gone from single to married with three kids in a year-and-a-half.”

As the nights and weekends added up, Mattingly said he began looking for something different. One Christmas, his adopted 6-year-old son wrote that he wanted his dad to be home early, impossible when the sportscast didn’t end until 10:30 each night.

The opportunity to move to radio presented itself when Chuck Barrett was hired as the football play-by-play voice of the Razorbacks in 2007. Barrett had hosted his popular afternoon show for more than a decade.

Tommy Craft, the market manager for Pearson Broadcasting, was one of the individuals who approached Mattingly about filling the vacancy.

“It was clear his talent level was good enough to carry an afternoon show,” Craft said. “He had been in TV and I knew the hours weren’t what he was desiring longterm for his lifestyle, and we were able to put a business plan together that was good for everybody.

“We’ve been doing this for close to 12 years now. It’s been a process that has been good for everybody. We’ve grown our footprint with more stations, and his show has been aired on all those stations. We’ve been very pleased with it.”

Mattingly developed his business with Stephen R. Graves, an adviser to high-level business leaders who he had met at church. They have remained partners for nearly 12 years.

“We’ve had a great run,” Graves said. “Bo is really good at his craft. His best craft is telling stories, doing interviews, being live and interactive with the moment of a story. He’s good when the lights come on and the camera hits. He’s an expert craftsman at what he does.”

At any given time, Graves could be coaching four CEOs for any of the 1,800 vendors that have offices in Northwest Arkansas. Mattingly said that type of counsel has been vital to his personal success.

“Nobody in my life, besides my dad, has had a bigger impact on my life,” Mattingly said of Graves. “Everything I know about business, I know from Steve Graves. Most of the important things I’ve learned in life, I’ve learned from Steve.”

Mattingly and Graves both said it was difficult in some ways, and easy in others to move away from radio.

“It’s difficult because we’re really walking away from an 11-year run and we’ve got tons of friends in the business,” Graves said. “We had to kind of shut our team down, which was tough.

“But at the same time we finally can focus on some of these things we’ve been trying, kind of moonlighting.”

Mattingly and his team have been branching out in recent years. In conjunction with Little Rock-based JM Associates, Mattingly's company has co-produced three pre-season football miniseries since 2016 that focused on former Arkansas coach Bret Bielema, Minnesota coach P.J. Fleck and Alabama coach Nick Saban. All three were aired on affiliates of ESPN.

He is currently working on a fourth series at a Power 5 football program. For proprietary purposes he won't publicly say who the project focuses on, but says it will be released in August.

The move from Arkansas sports radio to national - and possibly even international - video production is risky, but the reward is potentially high.

Because all of the series require on-location shooting, Mattingly's show has suffered some at the hands of his video ventures. He estimates he has been unable to host the show around 40 times in the past year, including Tuesday and Wednesday in the show's final week. Bart Pohlman, the show's producer, has served as a fill-in when Mattingly is away.

Pohlman and Sawyer Radler, the show's director, will remain on staff after the transition away from radio.

Mattingly said he considered giving up the show for a couple of years.

“It was probably a couple of years of wondering how much longer are people going to want to hear what I have to say on the same topic over and over again,” Mattingly said. “It doesn’t take long for people to get tired. Maybe it has less to do with what other people think and more to do with what you think about yourself, and whether you are bringing the same energy and same passion.

“I found myself spending more time on other projects and still trying to do a great radio show, but honestly not spending the kind of time I wanted to spend on it.

“I didn’t want to get to the point where we weren’t delivering a good product to the audience.”

Some have criticized Mattingly for becoming too close to the subjects he covers, such as Bielema, but he pushes back at the notion that his personal relationships caused him to lose any objectivity on the show.

“Everybody involved understands that we have a job to do, and if a coach were to ask me not to do my job just because we know each other, then I would not want to have a strong relationship with that coach,” Mattingly said. “When Bret Bielema got fired, I was not saying Bret Bielema should not be fired or this is going well. At that point it makes the relationship a little rough for a while.

In addition to an added video inventory, Mattingly has partnered with Learfield IMG College to produce a weekly podcast, “The Hog Pod,” that will air on the Razorbacks’ website. The podcast will be “labor intensive,” Mattingly said, and will tell stories about the athletics program, past and present.

The first podcast will publish on March 12 and will be a retrospective of the Razorbacks’ 1994 basketball national championship team, told from the perspective of former coach Nolan Richardson.

“That will take the place of doing the show,” Mattingly said. “The thing I’ll miss is when something exciting is happening and I won’t have the chance to weigh in.

“What will be different is not being able to have that interaction with the community on a daily basis. I’ll miss that interaction. But somebody else will move in there and have an opportunity.”

Craft said a new show is being adapted to replace Mattingly on ESPN Radio affiliates across the state, but would not say who will be the host. The new show will premiere March 11 from 3-7 p.m.

“It’s going to be very similar to Bo,” Craft said.