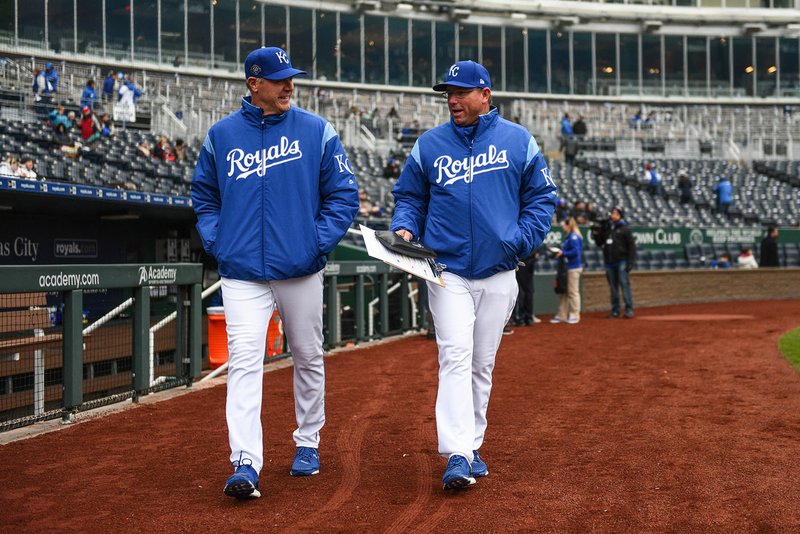 Kansas City Royals bullpen coach Vance Wilson, right, talks with Royals pitching coach Cal Eldred as they walk toward the dugout at Kaufman Stadium prior to a game this season. Wilson, who has called Springdale home for more than 20 years, completed his first season as a Major League coach. He was the manager of the Northwest Arkansas Naturals for the past four seasons. (Photo by Jason Hanna / Kansas City Royals)

Vance Wilson is back in the Major Leagues.

Eleven years after his final at-bat as a player, the 45-year-old made his return to the big leagues as part of the Kansas City Royals coaching staff this past season.

Notable: Finished his first season as a Major League coach serving as bullpen coach for the Kansas City Royals. … Promoted to the Major League staff after managing in the Royals’ minor league system since 2010, including four years as manager of the Double-A Northwest Arkansas Naturals. … Honored with the Dick Howser Award in 2016 as the Royals’ outstanding player development person. … Has lived more than 20 years in Springdale during the offseason. … Played all or part of eight seasons in the Major Leagues catching for the New York Mets and Detroit Tigers and served as a backup to Hall of Famers Mike Piazza and Ivan Rodriguez. … Played on Detroit’s 2006 American League championship team. … Named Junior College All-American at Mesa (Ariz.) Community College and signed as a 44th-round draft pick by the New York Mets in 1993. … From 2001-04 ranked among the top 3 National League catchers for lowest opposing stolen base percentage.

Like in his playing days, Wilson made stops as a minor-league manager in places like Geneva, Ill. and Wilmington, Del., in working his way back up to the Major Leagues.

The veteran of eight Major League seasons sounded almost like a rookie again describing the feeling of walking out to the field in Kauffman Stadium.

"There's nothing like a Major League baseball game. That 20 minutes before a game starts is my favorite time of the day, with that new day excitement," Wilson said. "There's just such a buzz. I do what I do so players can experience what I experienced.

"I'm just very fortunate to be in this game. Now that it's taken me back to the Major Leagues, I realize how fortunate I am."

Wilson is back in the bigs as the Royals bullpen coach or in essence an assistant pitching coach. He was pleased to be back but acknowledged it wasn't easy as the Royals finished a woeful 58-104 with a pitching staff that posted a team ERA of 4.94, which was 29th out of 30 in the Major Leagues.

"I enjoyed it, but it was definitely a grind," Wilson said. "The battle and the grind of staying positive on where we're headed."

His experience as a catcher has allowed Royals pitching coach Cal Eldred to toss ideas at him like fastballs or even an occasional curve and get a different perspective.

"He allows me to do a lot of things, but I think he leans on me as a sounding board," said Wilson, who also spent seven seasons as a manager in the Royals minor-league system, including 2014-17 at Northwest Arkansas. "I've always been involved and interested in the pitching part of it.

"Sometimes things sound good unless you've been in a game catching and seen it or done it as a hitter. That different perspective is what I brought the most I believe."

Wilson spent four seasons as the manager of the Northwest Arkansas Naturals, the Royals Double-A affiliate, which afforded him the unique luxury of working in the same town he lived with his family.

That's a rare feat for professional baseball folks. He was able to spend time with his family, which was impossible at his earlier stops in Illinois and Delaware.

But Springdale has been a constant for the Wilsons long before he came to the Naturals in 2014.

Born in Mesa, Ariz., Wilson earned junior college All-American status and signed to play college baseball at Arkansas. But he ultimately never played for the Razorbacks. He was drafted and chose to sign a professional contract with the New York Mets in 1993.

But he did meet his wife, Bridget, in Northwest Arkansas, and they made the decision to live in Springdale for the past 24 years despite his various baseball travels in his playing days and now as a coach.

"This is our main staging area, one thing normal in our lives and we'll always keep this no matter the hectic, helter-skelter part of our lives, Wilson said. "We will always come home and it will be normal to us. Bridget always made sure we had that stability.

"Baseball is volatile. Springdale, Arkansas, is not gonna fire us."

That remained the same with his promotion to the Kansas City staff in 2018 even though their daughter, Peyton, graduated from high school last spring and is attending college on the east coach.

Eldred said the pitcher-catcher dynamic worked perfectly between him and Wilson. But Wilson has a special way to reach players, Eldred said.

"He's organized and very discerning," said Eldred, who pitched for 14 seasons in the big leagues. "He pays attention to detail and knows how to discipline, which is not an easy thing to do in this game today. But the most impressive thing to me is his relationship with players and staff.

"He's honest and to the point, and players are attracted to that. And they know he cares."

Eldred said Wilson has the perfect combination of knowledge of statistics and analytics paired with the personal relationship to help develop players.

Even Northwest Arkansas general manager Justin Cole said he was able to pick up a pointer or two from Wilson to help him in his line of work.

"His teams had that mindset of working together and he led by example," Cole said. "That's something I always respected. He would never big league you. He set a very positive tone and that's something I thought I could learn from and apply."

Eldred pointed to Wilson's work with Royals pitcher Glenn Sparkman this season as a good example. Wilson had the right-hander in the minor leagues at Northwest Arkansas, so he had a prior relationship.

It involved Wilson doing his homework to help him be more consistent with the curveball to his glove side. They slowly shifted Sparkman from the third-base side of the pitching rubber to the first-base side, Eldred said.

"He was getting people out in the big leagues, but not as easy as he should," Eldred said. "He got sent down, but came back in September and he went to him and showed him the results. Here's where you were before and now here's what you've done after. It's little instances like that of helping a guy be better."

"He talked to them about that pitcher-catcher relationship," Eldred said. "Learning how to deal with a Salvador Perez. Those guys are intimidated and won't ask questions."

Even the 51-year-old Eldred, who also spent time as a special assistant in the St. Louis Cardinals and Royals organizations, said he learned from Wilson with his perspective as a manager.

"After a game, I couldn't wait to talk to him," Eldred said. "I'd hear him talking about something that happened in the game. Not second-guessing, but talk about a way to make it better. It's huge to me. I'm locked into just the pitching.

"He doesn't play second fiddle. He knows the game and sees the big picture. I think he's qualified to be a big-league manager."

Wilson got a reputation for his ability to develop players in the minor leagues. He even earned the Dick Howser in 2016 as the top player development person in the organization.

But he learned this past year there's a change in philosophy going from minor league manager to Major League coach.

"It's literally about winning a Major League baseball game every day," Wilson said. "I have to step back and have some perspective. In the minor leagues, if we lost it was OK if the players were getting what they needed.

"They are still developing at the Major League level, but that's their career and livelihood and it's all about production. As a Major League coach, you have to have that balance of urgency and patience."

He's excited about the opportunity for a second season with Eldred and the Royals.

The fact both were new to the job had an impact, Wilson said.

"We're in spring training and trying to establish the culture and set how things should be done and now the season hits and you're scuffling a little bit to get prepared," Wilson said.

"Nobody hands you a report on how to do this. You have to come up with that. Now it's about 'OK, we have our system down. How can we apply it quicker?'"

But no matter what happens with his baseball career, Wilson and his family will still call Springdale home.