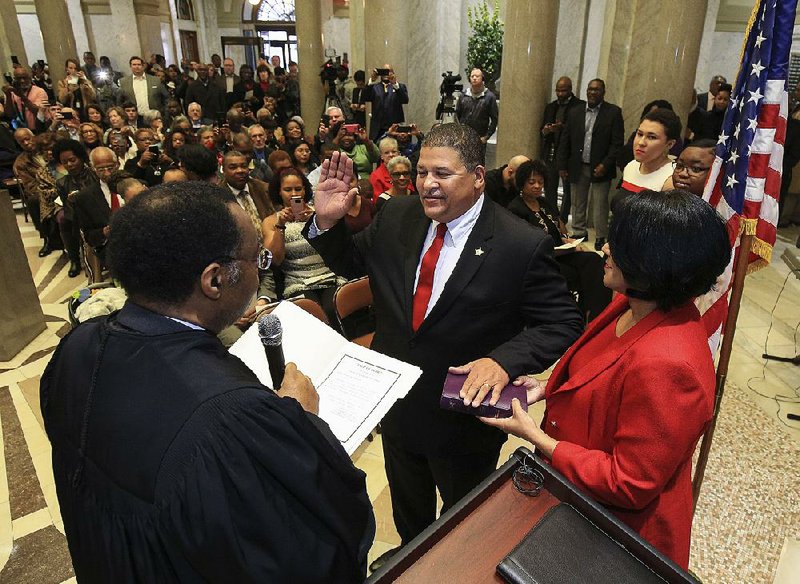 Eric Higgins was sworn in as county sheriff on Tuesday morning, and two hours later Terri Hollingsworth took her oath of office as circuit and county clerk. Higgins is the county's first black sheriff, and Hollingsworth is the first black woman elected to a countywide office in Pulaski County.

Higgins noted that he was taking on the role exactly 200 years after the Pulaski County sheriff's office was formed.

The longtime lawman said he planned to change the agency's approach to community policing. Instead of law enforcement deputies going into communities and telling residents what the agency needs from them, Higgins said, deputies should instead ask first what the residents need.

"That has to be our focus," he said. "We are empowered by communities, so we must be focused on communities."

He said he also plans to focus on re-entry and decreasing recidivism, especially among people who struggle with drug addiction and mental health issues.

Higgins is a retired assistant Little Rock police chief and a 30-year veteran of the Police Department. He became one of the department's more visible officers through his participation in several crime-prevention programs and as a former liaison to the state Legislature.

Maxine Allen, president of the Christian Ministerial Alliance interfaith leadership group in Little Rock, said she felt Higgins has the ability to better the sheriff's office from within, especially in an era where racial profiling and discrimination still exist.

"As a faith leader, I see Eric as a new wave of integrity in the department," Allen, 68, said. "Given the right team and enough time, we will see some major changes. ... In my lifetime, this is tremendous."

Higgins, 53, defeated Carl Minden in a May election. 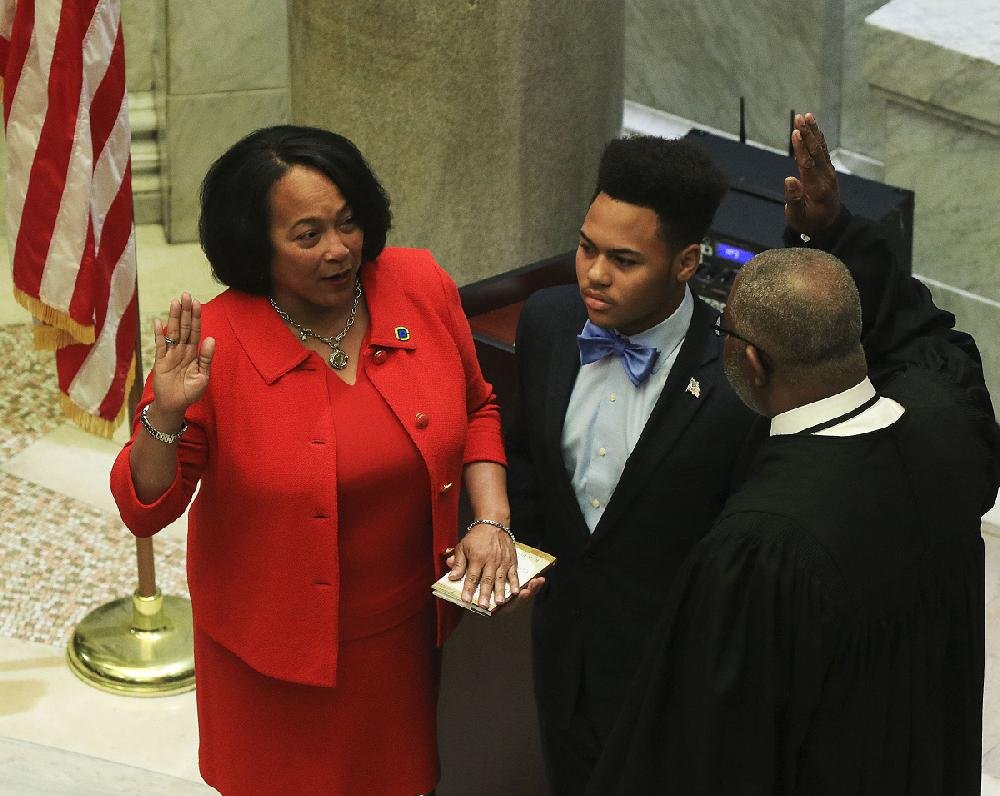 New Pulaski County Circuit and County Clerk Terri Hollingsworth, joined by her son Joshua Davis, is sworn in Tuesday by Judge Wendell Griffen during a ceremony at the Pulaski County Courthouse.

Hollingsworth began her remarks through tears, thanking her family and the community.

"At an early age, my parents instilled in me that public service provides an opportunity to do meaningful work," she said. "I thank the citizens of Pulaski County for this chance to do good."

She said she planned to emphasize integrity and transparency while in office. She outlined an agenda that included restoring voting rights for convicted felons, upgrading voting equipment, increasing voter education, and providing internships and youth employment programs.

She has held a variety of management positions, including chief administrative officer for the Delta Regional Authority. She worked in the secretary of state's office and served as a director of the state Board of Election Commissioners. Her work in the community includes service as PTA president at Little Rock Central High School.

Deran Ford, a 39-year-old entrepreneur, attended both ceremonies. He said it was meaningful to see people he had known for years ascend to leadership roles.

"They're all great friends, great for Arkansas. This is a great day in Arkansas' history," he said. "It shows that there's a positive movement in Arkansas."

Former Little Rock Mayor Lottie Shackelford said it was significant that the county had for the first time elected blacks to those leadership roles.

"For all of Pulaski County, that's a major step forward, and it makes me proud," she said.

"These are victories not just for our largest county and capital city, but for the entire state. Their leadership is setting an example we can all celebrate," Gray said.

Melanie Martin, the new judge for the Little Rock District Court, was also sworn in at the downtown courthouse on Tuesday. Martin defeated Peggy Egan in a runoff election in November.