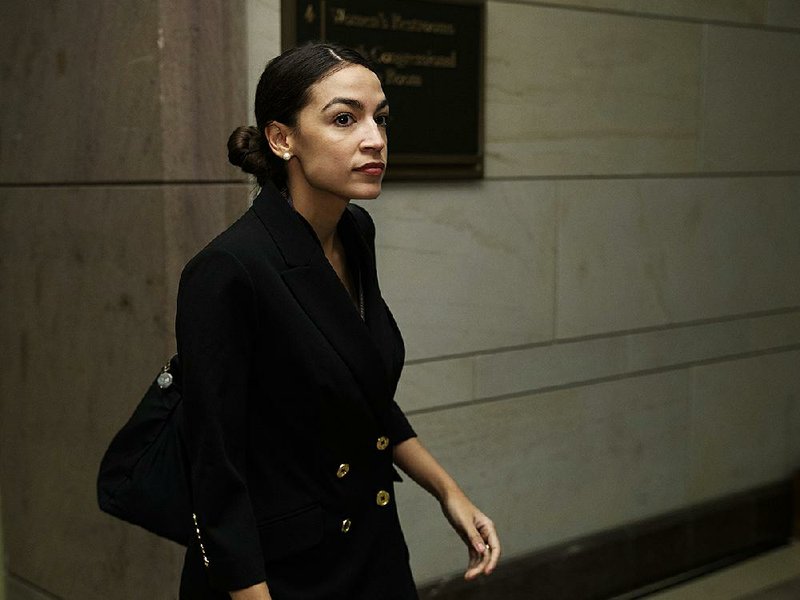 Rep. Alexandria Ocasio-Cortez, D-N.Y., is shown in this file photo.

WASHINGTON -- House Democratic leaders faced the prospect of a liberal rebellion on their first day in charge after prominent Democrats said they would oppose a package of rules changes endorsed by incoming speaker Rep. Nancy Pelosi.

Rep. Ro Khanna, D-Calif., and Rep.-elect Alexandria Ocasio-Cortez, D-N.Y., said they would vote against the rules changes today -- in the second vote Democrats will take in the majority, after electing Pelosi, D-Calif., -- because of the inclusion of a fiscal measure known as "pay as you go," or PAYGO. That rule, echoing a provision in federal law and in the Senate's rules, would require the House to offset any spending so as not to increase the budget deficit.

It remains to be seen whether the liberals will have the votes to torpedo the rules package, which sets the parameters for the new House. Defeat of the rules package would be a setback for Pelosi and could herald further divides in the Democratic caucus.

In the near term, however, Democrats could regroup and revise the package to win votes and move ahead on the House's work, including a vote on legislation to reopen the government.

Liberals such as Khanna and Ocasio-Cortez -- and a number of activists on the political left -- argue that PAYGO amounts to a legislative straitjacket that could impede their efforts to pass ambitious new social programs. And they are especially dubious of its necessity after congressional Republicans waived the law in 2017 to pass a tax bill that added more than $1.5 trillion to the federal deficit over its first decade.

"This is in no way a vote against the leadership. This is a vote against austerity economics that has caused great harm to middle class and working families," Khanna said in an interview Wednesday. "I don't think we need to handcuff ourselves in ways that Republicans never have."

Ocasio-Cortez announced her opposition in a tweet: "PAYGO isn't only bad economics ... it's also a dark political maneuver designed to hamstring progress" on health care and other legislation.

Beyond Khanna and Ocasio-Cortez, however, opposition to the proposal appeared muted Wednesday. Several high-profile freshmen Democrats -- Reps.-elect Rashida Tlaib of Michigan, Ilhan Omar of Minnesota and Ayanna Pressley of Massachusetts -- have not taken public positions.

Rep. Tim Ryan, D-Ohio, said in a statement that PAYGO "is a no go for me" and that the rule could obstruct "critical investments in education, infrastructure, and health care," but he stopped short of saying definitively that he would vote against the rules changes.

The co-chairmen of the Congressional Progressive Caucus -- Reps. Mark Pocan, D-Wis., and Pramila Jayapal, D-Wash. -- said they would support the overall rules package despite their opposition to PAYGO, citing a commitment from House leaders that the provision "will not be an impediment to advancing key progressive priorities" in the new Congress.

"We all agree that the real problem with PAYGO exists in the statute that requires it," they said in a statement. "That is why we will be introducing legislation in the 116th Congress to end PAYGO."

House Democratic leaders agreed last year to drop another rule proposal opposed by Pocan and Jayapal, one that would have made it more difficult to pass legislation to raise taxes.

"We all believe we need to ultimately bring our budget into balance, but these investments are too important right now to pass up and will yield significant returns for the U.S. Treasury," he said though it was unclear how he would vote.

The PAYGO rules date back nearly 30 years, to Congress' initial attempts to rein in the budget deficits of the 1980s. But the rules fell by the wayside amid the budget surpluses of the 1990s.

When Democrats took control of Congress in 2007, they included PAYGO provisions in their rules, and in 2010, they wrote it into federal law. But Republicans never included the measure in House rules, and the law has been repeatedly waived over the years -- making the practical impact of the law questionable.

Drew Hammill, a spokesman for Pelosi, responded to Khanna on Twitter on Wednesday by pointing out that the federal law remains in place regardless of what rules House Democrats adopt -- and including the measure in the rules would allow Democrats to "designate appropriate offsets" rather than allow the Trump administration to make the across-the-board cuts mandated in law.

"A vote AGAINST the Democratic Rules package is a vote to let Mick Mulvaney make across the board cuts, unilaterally reversing Democratic initiatives and funding increases," he said, referring to the budget director and acting White House chief of staff.

Having a splinter group of lawmakers stand up against party leadership is nothing new in the House -- the hard-right House Freedom Caucus did so routinely over the past four years of GOP control. But it is something that Pelosi and Democratic leaders had hoped to avoid on their first day in power.

Ocasio-Cortez appeared to actively solicit opposition to the PAYGO rule, retweeting a message Wednesday that it would take 18 Democratic no votes to block the rules package. But Khanna said he was not actively whipping colleagues to vote against it and otherwise praised Pelosi and Rep. Jim McGovern, D-Mass., for the remainder of the package.

McGovern, the incoming chairman of the House Rules Committee, has spent months putting together the proposals to create, in Pelosi's wording, the "most transparent" House ever.

That is set to be followed by the introduction, later this week, of a broad campaign and government bill -- one titled "H.R. 1" to emphasize its importance to House Democrats, though the GOP-controlled Senate remains a probable obstacle.

"We're setting the table," said Rep. John Sarbanes, D-Md., who is drafting the bill. "This will give everyday Americans a lot more confidence that all the other things we have on the agenda are going to be done in a way that really meets their expectations and responds to their priorities."

The proposed rules, released Tuesday night, include a number of reforms -- ranging from a rule allowing members to wear religious headwear on the House floor for the first time to provisions giving bipartisan bills a clearer path to floor consideration to the establishment of a special committee on the "climate crisis."

"This is not some strategy of coordination where [members] are trying to torpedo the rules package," Khanna said. "It's a single member who cares deeply about economic policy-making a point about the direction we should go, and hopefully leadership will take it in that spirit."

Information for this article was contributed by Jeff Stein and Paul Kane of The Washington Post. 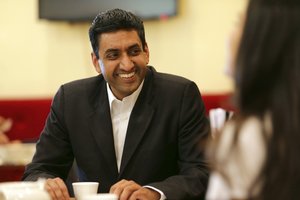