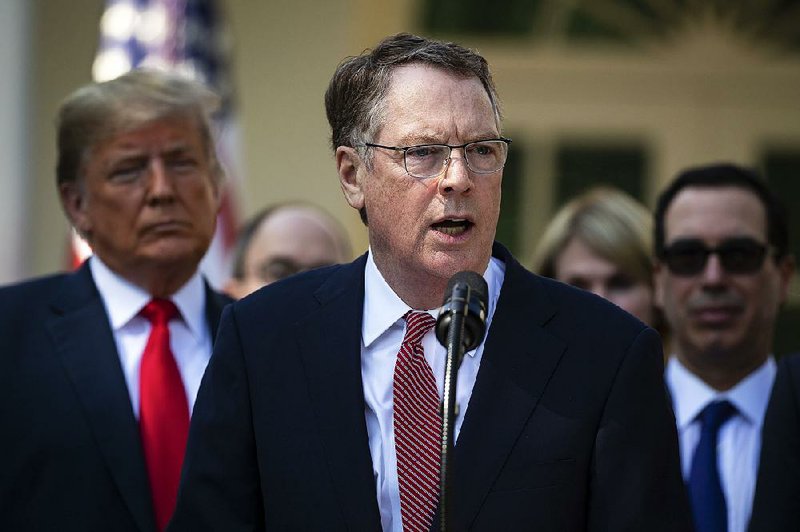 Robert Lighthizer, the U.S. trade representative, speaks beside President Donald Trump at a news conference about the U.S.-Mexico-Canada Agreement in the Rose Garden of the White House in Washington, Oct. 1, 2018. Lighthizer, a China skeptic, wants to prevent an anxious president from making a quick, empty deal in a rush to calm the markets.

China in recent weeks has announced steps to open up its economy since Trump and President Xi Jinping met over dinner Dec. 1 to defuse tensions. But they mostly fall short of U.S. Trade Representative Robert Lighthizer's demands for big structural changes on alleged forced technology transfers and theft of intellectual property, analysts said.

"The Chinese have done nothing along the lines of what he says he wants -- fundamental reform," said Derek Scissors, a China expert at the American Enterprise Institute in Washington. With two months remaining in the trade-war truce that ends March 1, "it was hard to imagine that happening in 90 days and it gets harder with every day that goes by," he said.

A spokesman for Lighthizer's office didn't respond to a request for comment on China's recent pledges to open its economy.

The presidents on Dec. 1 agreed to a pause in the implementation of further tariffs for three months while the sides try to negotiate a deal. Trump on Saturday sounded optimistic on the prospects, writing on Twitter that the deal "is moving along very well" and that "big progress" was being made.

Still, he left open the possibility that negotiations could fall apart, while signaling that any deal would have to address all of his concerns. "If made, it will be very comprehensive, covering all subjects, areas and points of dispute," Trump tweeted.

Pressure is building on both countries to deescalate the trade feud, which is starting to weigh on their economies and financial markets.

China's manufacturing purchasing managers index dropped to 49.4 in December, the weakest since early 2016 and below the 50 level that denotes contraction. Measures of new orders and new export orders slipped -- a bearish signal for future demand.

Meanwhile, five U.S. Federal Reserve indexes of regional manufacturing all slumped in December, the first time they've fallen in unison since May 2016.

The U.S. stock market in 2018 suffered the worst yearly decline since 2008. Major U.S. indexes fell sharply after early October, leaving them all in the red for the year. The S&P 500 index, the market's main benchmark, finished the year with a loss of 6.2 percent. The Dow Jones industrial average fell 5.6 percent.

The economic threats, agreed Wang Yong, an international relations specialist at Peking University, "might be conducive to negotiations" by nudging China toward market-oriented changes long sought by the United States.

Trade officials from the two countries will sit down in Beijing next week for the first face-to-face negotiation since the leaders' dinner. Deputy Trade Representative Jeffrey Gerrish will lead the U.S. delegation, which will also include sub-cabinet officials from other agencies.

Announcements coming out of Beijing in the past month included a pledge to treat state, private and foreign firms equally, a new round of tariff cuts on agricultural goods, cars and other products, and reports that the country was mulling legislation to curb forced tech transfer. China also announced it would resume buying U.S. soybeans, rice and liquefied natural gas starting in December.

Scott Kennedy, China analyst at the Center for Strategic and International Studies, said the new legislation could be meaningless. The informal guidance that's being given to officials locally on how to treat foreign technology and intellectual property is more important than a law, he said.

Lighthizer, who Trump named as his lead for the negotiations, said in December that March 1 is a hard deadline for China to come up with commitments it has promised to fulfill for the past decade.

"We need structural changes on this fundamental issue of non-economic technology transfer. It can't be just vague promises that we've seen over the last 25 years," Lighthizer told CBS's Face the Nation on Dec. 9. "There is a long history of having things not work out."

When Lighthizer senses that anyone -- even Trump -- might be going a little soft on China, he opens a paper-clipped manila folder he totes around and brandishes a single-page, easy-reading chart that lists decades of failed trade negotiations with China, according to administration officials.

"Bob's attitude toward China is very simple. He wants them to surrender," said William A. Reinsch, a former federal trade official who met him three decades ago when Lighthizer was a young aide for former Sen. Bob Dole of Kansas. "His negotiating strategy is simple, too. He basically gives them a list of things he wants them to do, and says, 'Fix it now.'"

Chinese officials continue to complain that they're not sure what is asked of them and it's not clear the U.S. side knows what it wants, people familiar with the matter said. Officials are planning for alternative retaliatory measures in case talks collapse, they said. Trump administration officials on the other hand said they have clearly laid out their demands.

"The key obstacle to a deal is whether the U.S. demands are a bottomless pit," said Lu Xiang, an expert in bilateral ties at the state-run Chinese Academy of Social Sciences in Beijing.

According to Kennedy at the Center for Strategic and International Studies, the White House is unlikely to comment on any of China's economic announcements before it's presented with a final package of commitments, and "Lighthizer's bar is extremely high."

"I expect the White House to keep a poker face up until the end. There will be no reassurance until there is a lot coming," he said. "The question is how much more will come? We need to take a wait-and-see approach with a skeptical eye."

The administration has tried to force China to change its ways with stiff tariffs on $250 billion worth of Chinese products, restrictions on Chinese investment in the United States and threats of additional levies on another $267 billion worth of goods. China has responded with its own tariffs on U.S. goods. But over a steak dinner during the Group of 20 meeting in Argentina, Xi and Trump agreed to a 90-day truce and to work toward an agreement that Trump said could lead to "one of the largest deals ever made."

Trump has repeatedly told his advisers that Xi is someone with whom he can cut a big deal, according to people who have spoken with the president.

"It's not some subtle shift; Trump has flipped since September," said Derek Scissors, who studies China's economy for the American Enterprise Institute. "He went from saying how he was going to slap tariffs on everything to all this talk about making the greatest deal ever."

Wendy Cutler, a former U.S. trade negotiator, said the U.S. likely can't realistically settle for anything less than an agreement by China to reform how it does business.

"There are certainly compelling reasons for both sides to reach a deal and avoid further tariff increases," said Cutler, now vice president at the Asia Society Policy Institute. "However, these reasons can only take you so far. ... Without a strong deal that addresses structural issues, it sets the administration up for critics to say, 'You took us into a trade war for this?'"

Information for this article was contributed by Jenny Leonard and James Mayger of Bloomberg News, Glenn Thrush of The New York Times and Paul Wiseman and Joe McDonald of The Associated Press. 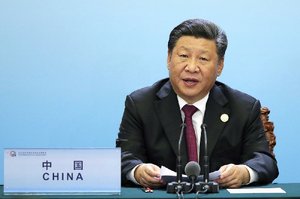