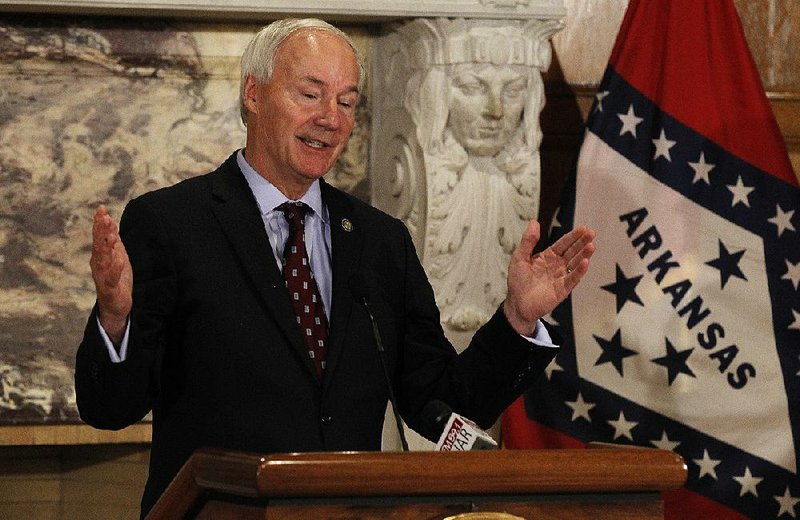 Gov. Asa Hutchinson gave nearly $450,000 to the Republican Party last month from the money left over from his successful re-election effort, according to his final campaign-finance report.

The Republican incumbent defeated Democrat Jared Henderson in November's election, raising $5.03 million and spending more than $4.8 million during the campaign.

The final reports for the 2018 election were due Monday for candidates for state offices such as governor and other constitutional officers, the Legislature and judicial offices. The reports are filed with the secretary of state's office.

Excess campaign funds may be disbursed to charities, political parties, the state treasury, cities or returned to donors.

Hutchinson, in a statement, said he followed a similar disbursement procedure after the previous campaign cycle with the exception of the contribution to the group attempting to erect a monument at the state Capitol to honor the families of military members killed while serving.

"I recognized the importance of the Gold Star Family Memorial," Hutchinson said. "The families shouldn't have to wait for years for completion of the memorial. This was a unique opportunity to fund the project and no one is more deserving of honor than those families who have lost loved ones in service of our country.

"The other contributions weren't solicited but rather followed in similar fashion to what I did in 2014."

By comparison, then-Gov. Mike Beebe, a Democrat, gave the Democratic Party of Arkansas $881,288 after winning re-election in 2010.

Doyle Webb, the state Republican Party chairman, said Thursday that the party's annual operating budget is about $650,000. The funds from the governor, Webb said, have been put into a pool for special projects, but that there's no current plans for the money.

The $100,000 to the party's building fund will go toward paying down the debt on the new Rockefeller Republican Center in downtown Little Rock. Webb said the party owes about $150,000 on the $2.4 million building, which was dedicated in September 2017. Webb said the building should be paid off by June.

Henderson on Monday reported total fundraising of $664,456 for the campaign while spending $766,052.

Henderson also reported repaying himself $95,000 for a loan; he stills owes himself $3,500 for an outstanding loan, according to the report.

Libertarian candidate Mark West reported $7,983 in contributions for the cycle and $8,083 in expenditures. He reported owing himself $100 for an outstanding loan.

Lt. Gov. Tim Griffin was the only other state constitutional office candidate who reported donating excess funds. He also returned more than $37,000 in contributions, according to his final report.

The Republican's charitable contributions ranged from $20,000 to about $1,000 and went to a variety of nonprofit groups, including The Call, Arkansas Policy Foundation, Our House, Arkansas Right to Life and the Arkansas Gold Star Families Memorial Committee.

Griffin said he tries to contribute to charities with which he has worked and that are consistent with who he is as a person and policymaker.

Refunding the money to contributors between Election Day (Nov. 6) and Dec. 31 when the excess funds must be disposed of would be rather difficult, Griffin said; additionally, most campaign contributors don't expect a refund, he said.

"[Refunding donations] would be a bear," Griffin said. "You'd pay $20,000 just to the accountant. That's not a particularly efficient way to spend the money you do have left over."

Attorney General Leslie Rutledge raised a total of $668,127 in her re-election bid last year, in which she defeated Democrat Mike Lee. Rutledge reported spending $597,159 with $71,197 remaining in carry-over funds.

Secretary of State-elect John Thurston raised $247,098 for last year's campaign, according to his year-end report. Thurston, who is now the Republican land commissioner, reported spending $244,546.

Justice Courtney Goodson reported a total of $246,163 in contributions for her successful re-election campaign. She reported spending $271,489 to fend off a challenge from David Sterling, an attorney for the state Department of Human Services.

Goodson owes herself $25,326 for outstanding loans to the campaign.

State Treasurer Dennis Milligan, who was re-elected, raised $33,775 last year, according to his final report, and the Republican spent $36,289.

Republican state Auditor Andrea Lea received $5,400 in campaign contributions, according to her final report. She reported spending $10,042 with $5,351 remaining in carry-over funds.

The new constitutional officers will be sworn in later this month.

CORRECTION: Lt. Gov. Tim Griffin raised $850,653 during his successful re-election campaign last year. The cumulative fundraising total included in an earlier version of this article was incomplete in secretary of state’s office's records.